In case you are wondering why I'm reposting this, it got deleted from my blog (but not by me). ToolBeltDiva informs me that if enough people "flag" your posts, Blogger will automatically pull it. Who knew? Here's the story. Most of the people that usually read this blog are people that I know (my real life friends) and people who read/post on houseblogs.net (my imaginary internet friends).* Well, someone on DCblogs.com posted a couple of blurbs about my site on their blog and I got twice the number of hits I usually get. I assume some of them are from traffic cops, maybe one of them knew officer [Buttnut] (not his real name). Next thing I know, my post disappears from my site. Too much flagging? or further government oppression? I don't know what got my post pulled. Maybe it was because I mentioned Buttnut's real name? Maybe it was because I implied that he may or may not sodomize his pets?** I don't know, I'm no expert.

*Maybe all you houseblog people are real, but for all I know, all the houseblogs could written by two teenagers in Syracuse with waaaaay too much time on their hands.

**So that I don't get sued, let me say that I was actually kidding about that part. I don't know if Officer Buttnut sodomizes his pets, for all I know, it's the other way around.

But anyway, I am re-posting this gem with certain edits and removing identifiable info, so that it doesn't get pulled again. Here it is:


I spent a few hours researching statutes last night and preparing my trial strategy. I was kinda nervous and popping antacids like they were M&Ms. I reaaaaaally wanted to get out of this ticket and make the traffic cop look like a moron in the process so I needed to be over prepared. 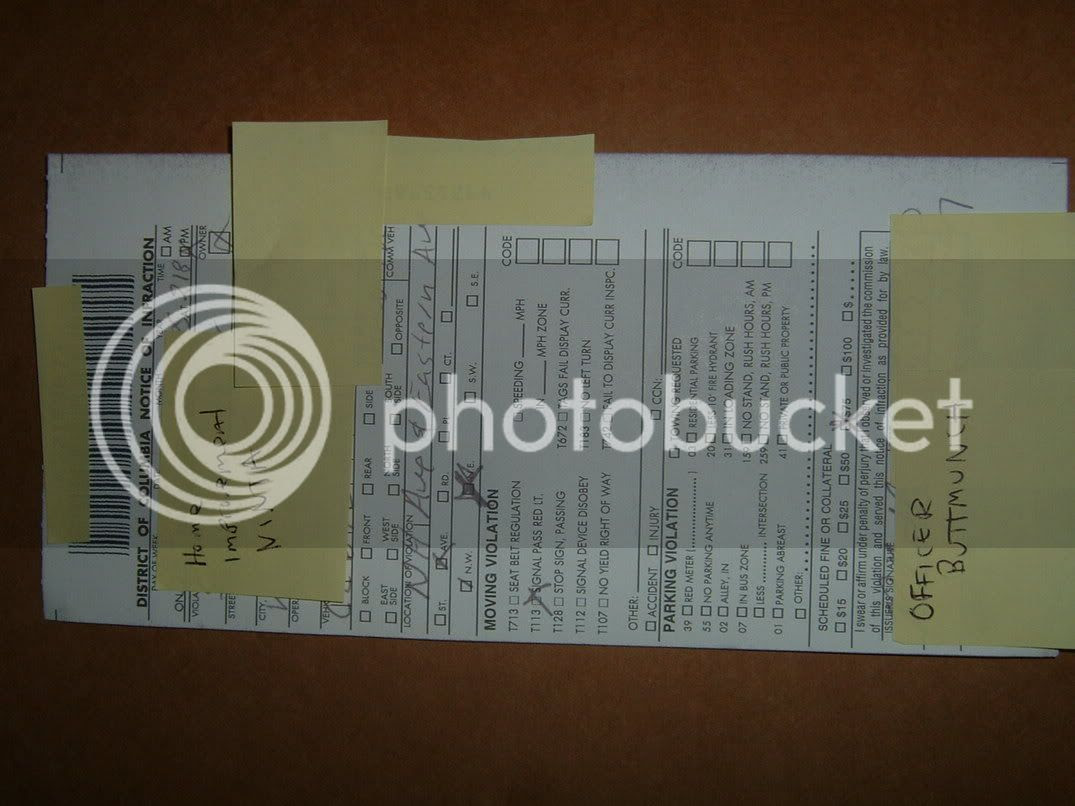 Here is a pic of the ticket (aka the government's attempt to oppress me...stop oppressing me!). I blocked out my address in case any real ninjas want to come by my house and see if my ninpo skillz are up to snuff...which they are...as far as you know.


Now, I don’t mind spending thousands on art that looks like it was painted by angry chimps or on trips to Maui, but as a libertarian I object to giving the leviathan state any of my money without a fight. So if these totalitarian thugs wanted my $75, they were going to have to fight for it!

I think I should mention something about my legal skillz before I go further.

Most of my friends know better than to ask me for legal advice. First of all, I don’t practice personal injury, family, criminal, property or any other type of law that might come in handy for mere mortals. Currently, I work with financial derivatives and before that I worked in mergers and acquisitions. If you want to buy a multinational corporation or delta hedge your foreign currency swaptions, I might be able to help, but if you want to know whether you can sue for slipping on the sidewalk, you’re probably talking to the wrong guy.

If that’s not bad enough, most of my close friends know that when I was in private practice I represented some pretty big companies that were in trouble with the law (not Enron, but a couple of other names you probably remember), and as a result some of my former clients are in prison. So to summarize, I know next to nothing about going to court, my record representing myself is spotty, and I will be relying on my own legal advice (and the last few people who relied on it are in federal prison…but hopefully not for anything I told them).

If you ask my parents if I am a good lawyer, they will probably say that I am the best one around…despite the previous evidence to the contrary. And I work with freakishly smart people who seem to think that I am one of them, so maybe I had it in me after all?

Here is a pic of the letter; the government's attempt to throw down the gauntlet...I say, it's on, bring it! [okay, as you can tell I have no idea how to use photo editing software...but I'm not so bad at post it notes and scissors though. Since the government has the original letter, and I'll leave this pic out until I figure out how to edit out Officer Buttnut's identifying info]. 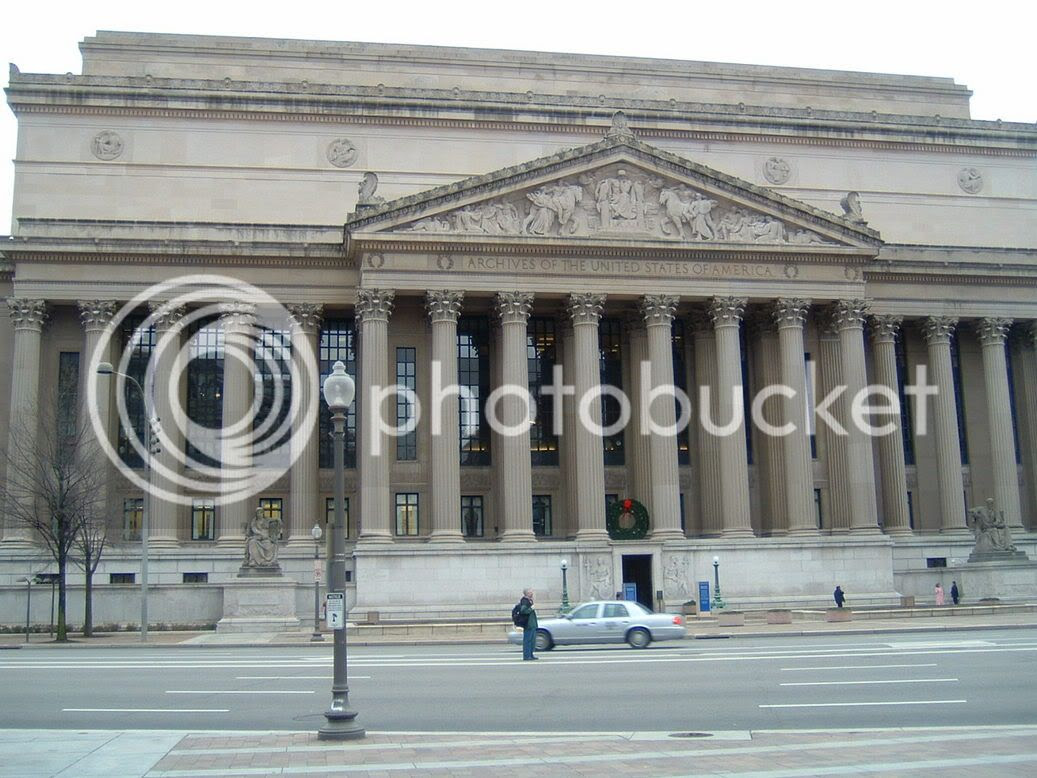 In case you're wondering, this is not a pic of the courthouse. I forgot to take a pic of it when I left, but this is a pic of the National Archives, where I had to go to afterwards to fight further oppression (long story). It looks like the courthouse so just pretend that this is where the magic happened.

Well, my court time was for noon (actually, it said 12PM, which technically doesn’t exist) so I showed up at 11:30 and waited patiently ‘till I was called at 1:45 pm. I had two alternate theories of why the summons was invalid on it’s face and two theories why the District couldn’t meet the legal standard required to prove the offense (“clear and convincing evidence of guilt”). But after I was sworn in, the hearing officer told me that since the cop didn’t show up, I would be found not guilty unless I wanted to admit I was guilty…no thanks. That was it. I stared into the gaping maw of justice and it yawned and went back to sleep.

I had relied on legal theories and statutes and in the end I won because officer [Buttnut] (the fat rude traffic cop) was probably too busy stuffing has face with doughnuts, sodomizing his dog, or doing whatever else traffic cops do in their spare time to show up to court.

Here is a pic of the admistrative hearing officer, a/k/a the one who helped keep the corrupt DC government from some of the Home Improvement Ninja's hard-earned beer money. [I'll leave this pic out too until I can anonymize it]


So, I’d like to have won using my rhetoric and lawyering skill but a win's a win as far as I'm concerned...and at least the District of Columbia will now have $75 less with which to oppress it’s citizens. Huzzah! The ninja strikes a blow for freedom! Ummmm, okay, maybe that’s a bit melodramatic. 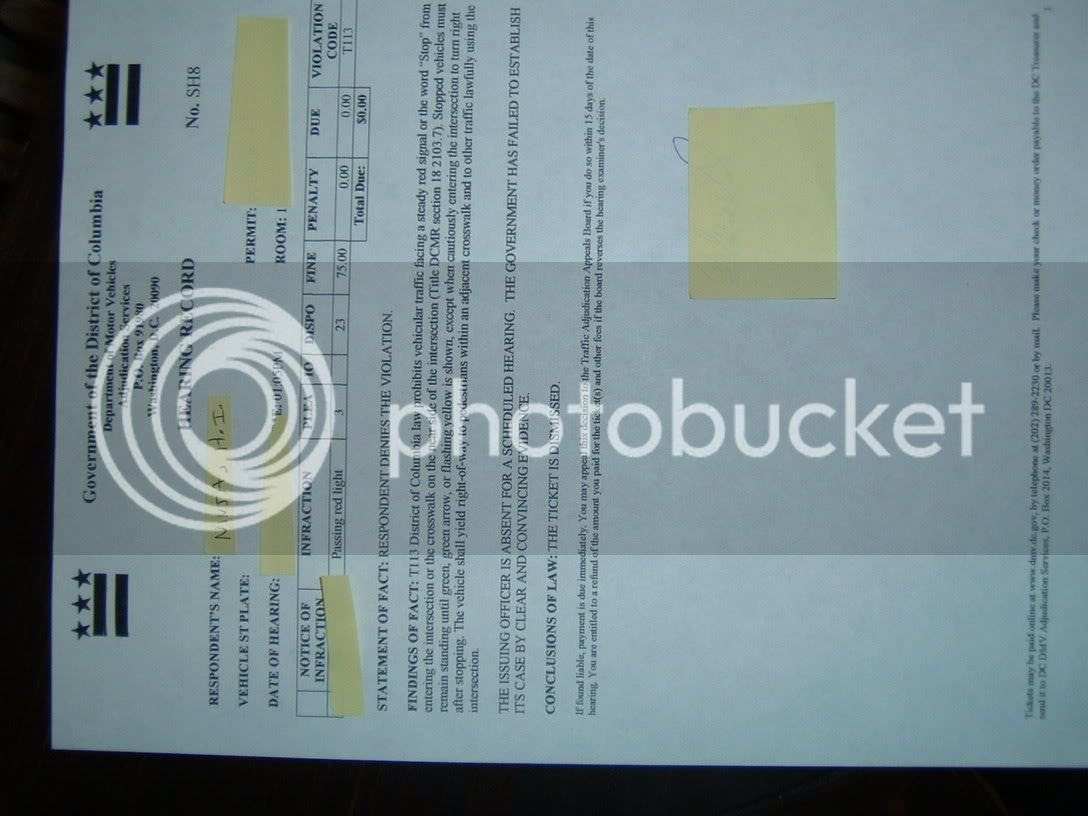 I should send this to the Library of Congress so they can display it next to the Declaration of Independence or the Constitution or something like that.
Posted by HomeImprovementNinja at 2:14 AM

Can you really take pictures in court or was that a sly, camera phone shot?

I took that with my regular camera and a timer.

I think the woman didn't mind because 1) I was the last case during that session, so I was the only person in the room; and 2) told her that it was my first case in court as a lawyer (although I have won a couple of times as a belligerent layman).

I told her it would be on my website, but maybe she thought it would be a legal blog, not one about drywall and shinobi warriors.

The wheels of justice grind on... What a waste. The whole system is a joke. I wish I could tag my tax dollars like so many migrating birds and see where they wind up at the end of the year.

Those court people look so happy. I've never seen anyone like that in the courts back in Colorado. They all look angry or bored.