Okay, I'll try to post some home-improvement pics of the rest of the marble tile tonight or tomorrow. I got most of it done, but the pics are a little screwy because of my computer issues. In the meantime, here is some ninja-related news that might be of interest.

This blog was supposed to be mostly about Home Improvement, but if Ninja news comes up, I'll inform you about it. If you don't like ninja news, don't worry, it doesn't happen very often (one of the "news" items is 3 years old).

An indy film maker made a short about a ninja on a blind date. 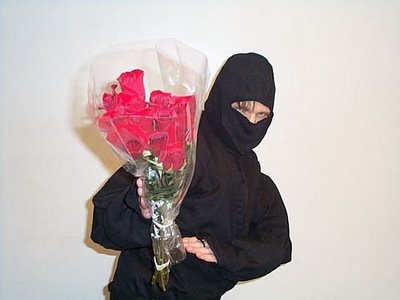 Nice getup, but I think ninjas can dress up like regular people when they are not out scaling rural japanese fortresses to slay recalcitrant feudal lords.

Most of the sculptures are nothing to write home about, but this ninja chap looks like he could hang drywall with the best of 'em.

*If you'll remember, DC did this a couple of years ago with Elephant and Donkey sculptures, which itself was yet another attempt by DC to imitate a NY Trend (the Cows on Parade), and come off as hipster poseurs in the process. Thank you Mayor Williams for proving that you are banal as you are dim-witted.

In other sad, but belated news, a friend sent me this article.

SAN FRANCISC -- San Francisco sheriff's deputies shot and wounded a man dressed as a ninja yesterday after he allegedly threatened them with knives and other weapons as they tried to evict him from his apartment.

Witnesses described a bizarre scene in which deputies shot and then tackled the oddly garbed man in the middle of the day on a busy South of Market street.

Deputies fired at least four rounds and wounded Charlie Perez, 30, in the elbow and leg. He was listed in fair condition at San Francisco General Hospital. Authorities said he avoided more serious injuries because he was wearing body armor.

The incident began at 9 a.m., when Perez refused to cooperate when deputies came to evict him from his apartment at 136 Sixth St., authorities said.

``He refused orders to stop and shots were fired,'' Hirst said. Perez then turned and continued to flee, she said.

``Then he rounded the corner onto Folsom Street. One of our deputies noticed there were schoolkids playing at a nearby playground. Then he took a flying leap and tackled him.''
Witnesses said the deputies appeared to have shot Perez as a last resort.

``I think the guy had it coming. The guy had a Samurai sword and wasn't stopping,'' said Jack Silva, 41, who works at a press shop across the street from where Perez was finally subdued.

Silva said Perez was dressed like a ninja, complete with a ponytail sticking straight up and black- nylon-and--chain belt.

``It was really weird; it definitely raised the adrenaline,'' Silva said.
Chris McDermott, assistant manager of MACadam Computers, said Perez was tackled right in front of his store.

``He had a machete, a hand blade and a weird metal belt with chains,'' McDermott said. ``He

was a very confused guy.''

About 120 children were playing in the yard at Bessie Carmichael School when the shots were fired. No one was hurt.
Page A - 20

I'll be the first to admit I feel sorry for this guy if he was really was a ninja and really did get evicted. Getting shot by trigger-happy cops is tough, but not as tough as trying to find a rental in San Fransisco. Good luck on that one, dude.

But I really doubt he was a ninja, since a ninja wouldn't stand in the street with a samurai sword. He would probably kill all the lights (no pun intended) then hide in the closet and attack the swat cops with some type of improvised (but deadly) short range weapon...like a shoe with deadly powerful razor blades attached to it.

Posted by HomeImprovementNinja at 3:34 PM

oh, snap - that ninja with the roses should be your avatar. ha!!