I don't think I've been in an earthquake before, and I've never heard of one happening in DC in the 10 years I've been here. Around 4am though, we got one. I was up since I had insomnia, which is a mixed blessing, I guess, since it would suck to have slept through that historic event. And yes, I would've slept through it because I can sleep through anything, including falling off the top of a bunk bed when I was a kid. I mean, I woke up sore in the morning, but I slept right through it (Feel free to mentally insert a "that's what she said" joke here).

Anyway, as far as earthquakes go, it was pretty mild. I actually didn't know it was an earthquake until I saw it on the news. It sounded and felt like there was a police helicopter hovering overhead looking for someone. I'm sure most people who are up at 4am and here what they think is a police helicopter outside would do the obvious like close down all the p0rn browsers on their computer, flush all thier cocaine down the toilet or throw more stuff on the pile of clothes hiding the dead hookers in the basement. But I did none of that. I just kept watching inane YouTube videos on failblog. Like this one:

Posted by HomeImprovementNinja at 12:26 PM 6 comments:

If you're going to be in town this weekend, a friend of mine is appearing in a group art show at the new Cre8 Space Gallery. It's a blues music themed art show and there will be a live performance at 8pm by blues guitarist Michael James "Blues" Baker, who is almost a thousand years old. The address is 1314 9th Street NW. (9th and M street). Click on the link above or THIS ONE for details.
Posted by HomeImprovementNinja at 2:19 PM 1 comment:

Back to the Future

the future and hijinx ensued. Although July 5, 2010 must've seemed like a meelyun years in the future, it was, in actuallity not that far into the future--especially when you consider that Michael J. Fox still looks like a teenager(a teenager that's married to his mom, but still...).

When I saw this I was saddened a little bit. Sure, flying cars are almost here, but it will be a long time before I commute to work in one. And WTF happened to hoverboards?

If there is anything that kept me going during the dark period known as the 1990s, it was the thought that within 10 years I would have one of these bad boys and life would be good.

We can put a man on the moon, but we still don't have hoverboards?
Posted by HomeImprovementNinja at 2:25 PM 2 comments:

It's no secret that I love gentrification. As more and more trendy restaurants and stores move into Columbia Heights, I get happier and happier. The more people who want to live here, the more my house will be worth when I decide to sell it soon. If some hipster who moved here a year and a half ago thinks that this place will lose something if it starts to look like Bethesda, I will laugh and try to keep from punching him in the face. When I moved here 6 years ago, this neighborhood was not much to look at. The Giant Supermarket had just opened up, but the Target Mall was still a few years away and unlike now, where you get a selection of Pho, Fusion, Mexican, Vegan and any other trendy dish that your heart can imagine, when I moved in here the only place to eat within walking distance of my house was the bullet proof chinese food place. It had a wall of bullet proof glass and if you wanted something, you YELLED your order through the bullet proof glass, placed your money in a bullet-proof lazy susan and passed it to the other side, then they would place your food in the bullet proof lazy susan and send it your way.

Now, a block away from that same bullet proof chinese place are a wine bar (with paninis!) and a new craft beer bar/restuarant, a brick oven pizza place, and a community arts center. Thank you gentrification!!!


Now, develepment doesn't happen uniformly everywhere. There has been an eyesore near the ninja fortress since before I moved in. A burned out shell of a building that once housed a jazz club, but currently houses mice when the weather gets bad. 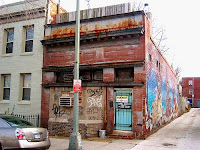 Now that Gentrification has reached a certain point, even this burned out sh1t-hole is worth buying and fixing up into something nice. Gentrification = reinvestment in infrastructure. Get it?

So this former eyesore is being gutted as we speak and will very shortly (hopefully) look like this:

WELCOME FUTURE NEIGHBORS! If this place is a little to pricey for you, I have a nice fortress very near by that I'd be willing to sell you :)