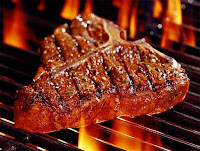 I randomly remembered this song that has such awesome lines "who built the pyramids? Elvis!" The girlfriend thought I made it up, but after a few minutes I found it and started singing it. Elvis is everywhere, baby, enjoy it!!!


Posted by HomeImprovementNinja at 11:30 AM No comments:

I got the news last night that my sister in law gave birth to a baby boy. I wonder why people always specify that it was a "baby" boy. Is that really a necessary adjective? Are there a lot of people who give birth to full grown boys, such that you'd have to specify to avoid confusion?


"Really? you had a boy? a baby one or full grown? a
teenager? that must've been painful!"

I don't know if it was a "bouncing" baby boy because no one dropped him, but he appears to normal in all other aspects. In fact, better than normal...exceptional! Very handsome. He looks strong too (a future jiu jitsu fighter? one can only hope).
Posted by HomeImprovementNinja at 5:35 PM No comments:

Happy Birthday Elvis: the other kind of Fight Club

Happy belated birthday to the third greatest American to ever walk the earth, Elvis Presley. In case you are wondering who the first and second greatest Americans are, they are Thomas Jefferson and Jack Lalanne, in that order. You might think this is open to debate, but it's not. Arguing about this is like arguing about the existence of gravity; it will just make you look foolish.
Here's something you didn't know about me. Some people don't work Christmas, some don't work on Thanksgiving or Easter. But me...I don't work on January 8th. Cuz' that's Elvis' birthday! Some people think I kid about how awesome Elvis is, and that I heap fake praise on him like it's some kind of performance art. But Elvis was awesome because he genuinely didn't a sh1t. The world was segregated but he played black music. He wore ridiculous outfits and ate peanut butter, banana and bacon sandwiches whenever he wanted. He had a pet monkey and if he didn't like what was on TV he would shoot it. He was a black belt in Karate back when that actually meant something. Fcuk Charlie Sheen, Elvis is the real one with Tiger Blood in his veins. In other words, Elvis was the original Honey Badger!

So I don't know what you did last weekend, but I celebrated by going to the Elvis Birthday Fight Club. As part of the show they had an Elvis Trivia contest and they asked for volunteers. I was chosen. And if you think I'm good at fixing houses, derivatives law, or jiu jitsu, that's nothing compared to how awesome I am at Elvis Trivia. 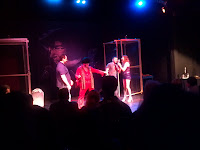 I had a worthy opponent, but I won. In fact, I smoked him! Trying to beat me at Elvis trivia is like trying to beat Rosie O'Donnell at a doughnut eating contest: not gonna happen!
Anyway, I had a great time and look forward to doing it again next year to defend my title. So who are your top 3 americans of all time?
Posted by HomeImprovementNinja at 8:35 PM No comments: