Does this House Make Me Look Fat? 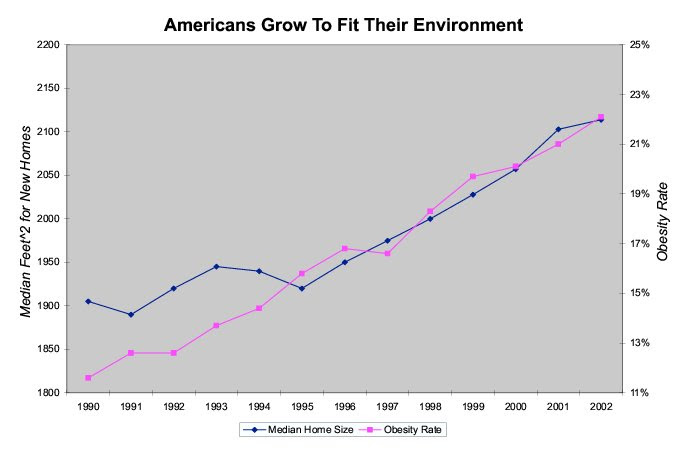 Well, I usually don't link to other people's posts. Mostly, it's because until just now, I had no idea how to. Yet this bar chart deserves such an honor.

I had blamed taking on 15 pounds to stress, chili dogs and lack of exercise, but apparently I put on weight because I bought a bigger house.

Since people expand to fill their environment, my cave-gene sought to make me larger so that I would take up more territory. My larger territory would be marked by my larger physical presence, which is less messy than marking it by peeing in the corners.

I got to thinking about this graph because just when I decided to eat healthy, Burger King sends me a stack of coupons in the mail with my two favorite words in the english language: Free Whopper. All I have to do get a free one is buy one at the normal price. I should mention a couple of things.

If I wasn't trying to eat healthy, this would be a no-brainer. I wouldn't eat two Big Macs, even if they were free and even though McD's is closer, but this a friggin' whopper, people.

Now, just because something is free, doesn't mean that you should take it. If someone offered you a free glass of Miller Lite, or urine, you would probably say no, right? Now before someone at Miller decides to sue me, let me say that I am NOT saying that Miller Lite is made from urine. My friend who is a chemist tells me that, although they taste same, there are less calories in urine.

At any rate, BK is not in the cards for now. I went to the gym on Monday and Johnny Vegas lifted more than me (I'll never hear the end of that one).

My computer is crapping out on me and I have to take it to the Apple center in the Mall to get it checked out, so I did manage to upload a couple of finished pics of the bathroom before my computer really started acting funky so I'll try to post the final bathroom pics from the Toolbelt Diva's computer in a day or two. (I say try because the TBD read me the riot act a few days ago about what a terrible boyfriend I've been lately. I couldn't defend myself b/c it's all true, but now that there is some progress on the place, maybe I'll be under less stress...real floors under your feet will do that sometimes).
Alchemic Spot: Americans Grow To Fit Their Environment
Posted by HomeImprovementNinja at 2:10 PM

I'm reminded of the Bruces skit from Monty Python Live at the Hollywood Bowl.

Bruce 1: "We find that your American beer is like making love in a canoe." Pause. "It's fucking damn close to water."

I think I make my house look, um, skinny!!!!! I have lived a life of indulgence since I made my first pilgrimmage to Michigan in March in search of a house to buy. Let's face it, when you don't have a stove or decent kitchen to cook in, fast-food with it's dollar menu becomes the rule instead of the exception. As of January first, I have successfully maintained a weightloss plan. With perserverence, in 6 months, I'll be where I need to be and won't make my house look so skinny, instead it will look huuuuuuge!

I think it all depends on what project you are involed with in the house. During my two month kitchen remodel I put on weight since we consumed mostly pizza and fast food. Doing dishes in the bathtub just wasn't an option.