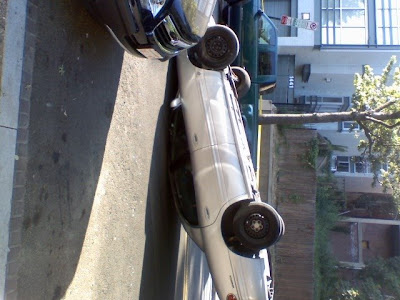 I spotted this car on Florida Avenue and 17th street. There were no other cars involved in the "incident".
Sometimes people back home in NYC think I'm kidding when I tell them how bad the drivers are in DC. When I tell them that it snows half an inch and the entire city shuts down (no, really!), and people here don't even know how to drive in the rain. (maybe you should stay in Arizona or New Mexico or wherever the hell was cursed by the universe with no rain, and leave DC to people who know how to use windshield wipers).
But I'm not exaggerating. The only thing worse than the drivers in DC is the police force...and the school system...and the taxes. Maybe I should move to Arlington...or Bethesda? Anyone want to buy a 1/2 completed ninja fortress? I'll throw in a cute dog for free!

Posted by HomeImprovementNinja at 2:36 PM 9 comments:

This weekend I was shot by BB gun while walking my dog and my date had her car broken into; I went to two clubs, 4 bars, an art show, a bar be que, a dog adoption event, and an improv comedy show. I'll post some pics of my "gun shot wound" with the recap tomorrow, but I'm tired right now and I have a headache. I don't have mixed feelings about gentrification because when my neighborhood looks like Bethesda, I'm sure I won't have to worry about car break ins and getting shot. Attention chain stores and yuppies: I welcome you to the neighborhood!!! So the next person that tells me they have mixed feelings about gentrification destroying the character of a neighborhood will get c0ck-punched by me. (I'm not kidding about this).
Posted by HomeImprovementNinja at 6:53 PM 5 comments:

I got back into town a few days ago. Attending a vegetarian wedding, it turns out, is as strange as it sounds. I liked the wedding, except for the no-meat thing. I like hummus as much as the next guy, but if I go 24 hours without eating meat, I'll probably bite someone. The ninja clan hails from South America where people sometimes eat meat at all 3 meals. And sometimes during snack time.

If my cousin and her husband thought that animals were spared by not having meat at the wedding, they don't know me very well because the next day at brunch I had more bacon in one sitting than I ever had in my life. I can feel my veins clogging as I type this....mmmmmmm....bacon!!! Although I'm dating a vegetarian, she did not come to the wedding. I wasn't born yesterday and I know that the quickest way to end a relationship is to present all the dysfuntional members of your family to someone at the same time. It's like if someone asks you for a quarter for the soda machine and you hit them in the face with a giant sack of pennies. I know the analogy doesn't make sense to you, but then again you don't know my family.

It was good to see all the family in one place again. It seems like I only get see all of them at once during weddings and funerals, and usually they are better behaved at funerals. I learned some interesting things about vegetarians at the wedding (besides the fact that vegans are just too fcuking smug about how much they love animals), but that would probably make a good follow up post since I don't like too much in one sitting...it starts to feel like work.

BUT...on an unrelated note, I've been having a good week. Yesterday I did something that made me feel like a lawyer again (no, I didn't kick a homeless person or steal from someone's trust fund). I don't think the person I helped realized that my law firm used to bill me out to clients ant $300+ per hour to answer the same kind of questions, but I enjoyed doing it so it doesn't matter if it was free (well, technically it was for two bud lights). And if you're wondering, I don't think my advice was worth $300 per hour since a few of my clients are in federal prison right now (and I wasn't a criminal lawyer). But I look very convincing and authorative in a suit!

Since it's Friday, this weeks free plug goes to Matt Sesow and Dana Ellyn, two artists that I know. They went to china with nothing but their paintbrushes and bought all the paint and canvases in China and shipped their paintings back for their "Made in China" show at the Longview Gallery on 9th street in DC's Chinatown. The opening reception is Saturday from 6-9 pm. I hope that some of my tens of readers can make it.
Posted by HomeImprovementNinja at 2:51 PM 2 comments:

What happens when you say yes? A friend was telling me about a book called YES MAN (See the link in the sidebar), where the author decides to say yes to everyone for a year. He says yes to people offering him pamphlets on the street, and inviting him to attend a cult meeting where people believe aliens built the pyramids in Egypt. Along the way he wins the lottery (and loses the money) and gets married. But changing his thinking changed his world. Well, I guess that's my point, but I don't really need a point, because this is my site and I can ramble if I want.

Lately, I've been saying yes to more things and being open to new possibilities. I went to a wedding that I was invited to (even though I hate weddings) and started dating a hottie I met there. I replied to an email looking for volunteers willing to participate for several hours a day in a project that would be turned into a book. As a result, I'm being featured in the book, almost got on a National TV show (they picked one of the others in the group) and got a free Carribean cruise for 2.

Now, I'm not saying you should say yes to everything. For instance, if some british guy in a bar buys you a beer and you thought he was being polite, but it turns out that he thought you were gay because you had a fashionable shirt on, you don't have to say yes to the offer of sex. This is a totally hypothetical story, by the way, and purple shirts are NOT gay. Jus' sayin'.

I'll say more about the book and the cruise when the book is closer to completion (I don't want to jinx it). But you can order the book through my NEW Amazon link on the sidebar and let me know what happens when you try it.
Posted by HomeImprovementNinja at 2:31 PM 6 comments: