I won't post a picture of my knee because you might be eating, but I've been having a knee...issue. It was bothering me during jiu jitsu class, but it was no worse than any of the other bangs and bruises that I've suffered at the hands of that cruel samurai art. It got progressively worse though and by midnight I could no longer walk up the stairs. I thought I'd rest it a couple of days, but the pain got really bad and my knee started to swell. It looked like someone put a small shot glass under my knee. The GF was kinda grossed out by it so I started to suspect it might be worse than I thought. I tried to find out what it was on the internet, and it looked like "bursitis" so I made an appointment with an orthopedic doctor the following day (the same place that I went to when I broke my finger doing jits). The doctor took one look at it said it wasn't bursitis.

Dr: No...that's not bursitis. That's an infection...a really, really bad infection. Do you know how it started?

[I wanted to say that it hurt during class, so I did what I normally do when I am injured: ignore it and keep practicing, but I thought that would sound ridiculous]

Me: who knows how these things happen? I blame the republicans...

He wanted to cut my knee open right then and there, but since I'm squeemish about blood and needles, he put me on a strong antibiotic and said to come back in a couple of days. After a couple of days the thing didn't look any better (he thought it looked worse, and it still hurt like a mofo) so he cut it open and drained out the fluid.

Normally I would be happy to get some vicodin around the holidays, but I was in so much pain that I couldn't even enjoy it. After a day or two though, I feel a LOT better. My knee still looks like a weasel took a bite out it, but now I can walk almost normally. I hope it will be better by next week. There's a tournament I wanted to attend when I get back in town, but right now I'm in the wrong weight class (no, I'm not fat, I'm just either a little too short for my weight or I need to start doing a lot steroids).

ANYWAY. Flying out tomorrow, so Happy Thanksgiving everybody.
Posted by HomeImprovementNinja at 2:18 AM 6 comments:

The Brazilian consulate in DC is like a metaphor for third world. It's hot, crowded, incompetent and unfair. There is a bulletproof glass partition separating the great unwashed from the bureaucrats and surly people giving you confusing and sometimes contradictory information. When I went, it was the middle of summer and there was no air conditioning. Well...no air conditioning for the tourists. The people behind the glass were apparently nice and cool, but the rest of us were not so lucky. I don't know if you've ever been in DC in the summer, but this town was built on a swamp and it gets hot and humid in here. Many people don't know this, but ball sweat was invented in DC right before the civil war. Although back then it was known as "testicular perspiration" or "Lincoln's laundry".

Brazil require a lot of things to get your visa, not the least of which is a cashier's check for the exact amount you owe them. I had to make an extra trip there because my visa was $130, but the GF's visa was extra $10 because I was dropping it off for her. Would they take cash or a credit card for the difference? HAHAHAHAHA!!! No, just take another half day off work and wait in line again and you'll be fine.

After eventually getting the Brazilian visas, I high-tailed it over to the Paraguayan embassy for one of theirs. Paraguay's embassy is the size of a decent rowhouse in Dupont. The security guard was somebody's grandfather and the people behind the glass were somebody's cousins from that side of the family that you don't talk about in public.

We dropped the passports off and swung by on the morning of our flight because they apparently couldn't stamp two passports without at least a week of lead time. When we got there, they lost the passport...panic ensued. Even if we couldn't the paraguayan visa's, we couldn't go anywhere without our passports and our tickets were already paid for and non-refundable. I contemplated each of us losing $1000 on plane tickets and wondered if the grandpa guard would be able to stop me from strangling the strange woman who didn't seem to be too concerned about my lost passport....TO BE CONTINUED.
Posted by HomeImprovementNinja at 4:58 PM 6 comments: 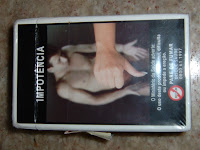 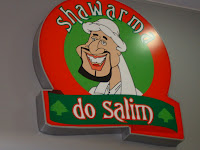 Despite the cartoon, I did eat here...and everywhere else in Brazil. I ate everything that wasn't nailed down (and some things that were). But more on that in future posts...
Posted by HomeImprovementNinja at 6:35 PM 2 comments: