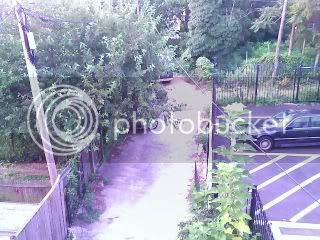 This idiot, behind that tree, (with expired tags) was blocking my driveway this morning. Although I don’t normally drive to work, I’m through with being courteous. So I left a little nastygram on his car saying that if he parked in the driveway, I would have his car towed. Then I called 311 when I got to work to have the cops ticket the car. I might as well put my tax dollars to work.


I know you're probably thinking that I could drive around that car. Yeah...so? I shouldn't have to. That's my effin' driveway and I'm through being nice about it. If he wanted to park in my driveway, he shoulda' asked me. Then I woulda' told him:

But as it stands, this intrusion upon my property rights will not stand.

As a libertarian, I object to resorting to government oppression to get my way. I think people should be able to work out problems on their own, but if I solved the problem my way (throwing a brick through his windshield and torching his car) I’m sure I would look like the bad guy. Some idiot in a 15 year old Lincoln with expired tags blocks my driveway, I commit some minor arson and all of a sudden I’M the one who’s in the wrong? Anyway, I’ll let the cops handle it. Maybe they’ll give him a ticket, maybe they’ll tow it, or maybe, just maybe, they’ll throw a brick through his window and set fire to his car. THAT would be tax money well spent.
Posted by HomeImprovementNinja at 4:06 AM

Your ninjacam skills have prevented me from figuring out your locale. No one should park in your space. You paid for it.

You should have put a small nail in the front tire.

Put a fish on his engine block!

I'd want to do the same thing. But then I'd feel bad, and I'm pretty sure that I'd forget to follow-up by calling the cops.

So, basically, all I'd do is walk around swearing at some guy parked in my driveway with expired tags.

Much like I do about the bastard in my building who drives an Escalade and parks across two compact car spots.

As a Libertarian I also agree with you that you should work it out yourselves. But, the whole point to being Libertarian, and thinking we don't need government intervention on everything also relies on our fellow U.S. Citizens being as smart or smarter than we are. And well, need I say more?

That's one of my pet peeves too. I've never had anyone stay there long enough to have them ticketed or towed though. Our driveway is in bad shape, and it's on the main road, most houses have alley driveways, so I guess people don't expect a driveway on the main road. Or they're just arrogant, I tend to think the latter is true.

DC people are for damn sure arrogant - and as much as I am in the camp of working things out...people around here are to asshatty to do that. Hope he gets towed.

MA: I wish I had thought about the nail. D'oh!

dara: after getting a parking ticket last month when someone was in driveway, I'm not playing nice any more.

velvet: Well, if they can't be as smart, at least let me be allowed to throw a brick at their windshield. That'll learn 'em.

derek: It's just arrogance and laziness. He doesn't know who's driveway that it, but he knows it's not his.

marci: I hope so too. Let's hope this city is efficient...for once.

"Father John, father john... come quick... they're towing your car! No, no, don't worry about the homeless you were feeding... go get your car... otherwise, how will you drive Mrs. Jones in the morning to her dialysis appointment?"

a fish? That's so sick and funny at the same time.

FYI regarding the fish thing. We did it to my brother before he took off for the honeymoon. He got on the motorway and within a few miles the smell got so bad he had to stop and throw up! The point is, it is one of those things that you find out about later, rather than sooner.... he will never know who did it and will remember the event for the rest of his life. Also, if he is Catholic, then you screwed up his Friday suppers for a while!

Well you could have left a note saying "please do not make me get creative, you wouldn't like me when I'm creative". As there are several things skirting lawfulness one could do. Illegal waste/ dry concrete disposal, which, if it happens to land on the violating car, is unfortunate.
Or as a good citizen you could assume it was a stolen car, find some spray on chalk or shoe polish, mark it for the cops/ DPW to find (they have such trouble) with the big words "STOLEN CAR" "PLEASE TOW".

Here's another theory - because my neighbor called me this morning with the same problem. A car blocking her alley. She went through the same D.C. shuffle that you did: can't tow until ticketed / cops won't come out to ticket.

The car could be stolen.

I'm with MA -- where are you? I see a car in a parking lot next to an unpaved country road. But my guess is that what I'm seeing isn't right.

The cops are a joke when it comes to stuff like that.

Some idiot got into a high speed chase through town with the cops and drove halfway through the yard of our other house before he got stuck and abandoned the car. When I called the cops to ask what they were planning on doing with the car, they just said that the car hadn't been involved in a crime so they weren't interested in it. If I moved it myself the guy could claim damages if anything happened to it and sue me. WTF!?

Or here's an idea -- a brick ON his hood weighing down a note that says, "Next time, it will be IN your car, not on it."

Maybe they'll get the message?

How about a sign that says, "Private driveway -- violators will be eviscerated."

Most of them won't know what that means though.