They’re building a Target and some other big chain stores in my neighborhood (Columbia Heights). The good news is that it should raise property values in my neighborhood and enable me to laugh all the way to the bank when I eventually sell the fortress. The bad news is that it won’t be finished for another year or two. Since my friend, Sailor Moon, is visiting and my washing machine is still broken (the washing machine elves didn’t fix it overnight) I needed to run out to buy some sheets for the guest bedroom so that she doesn’t think I hate her and that’s why I made her sleep on dusty linens. (My house is construction site so everything is dusty). A Target in my neighborhood would’ve been really convenient. And if the DC government hadn’t stalled Target for 5 years, it would already be there. But if you want to invest millions in DC, bring jobs, benefit the citizens and increase tax revenues, DC will treat you like a tranny hooker at an evangelical church.

So, I NEED some sheets right now, but I don’t want to drive all the way to the Target in VA (which is at least ½ hour each way—or 45 minutes if you drive like I do). So I went to this place next to the evil Home Depot on Rhode Island Avenue because I assumed they might have some. They did. I got there right before closing and unfortunately didn’t have time to peruse their other wares. I HAVE to go back there because I saw THIS: 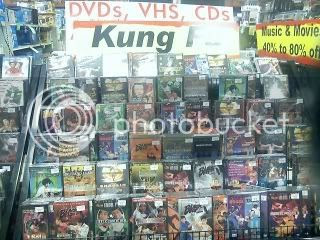 Hundreds of old skool Kung Fu DVDs for $4 each. HOLY CRAP! They had a bunch from the Wu Tang series, but the place was closing and they were shooing me out before I could find out if they had the really good ones that left an indelible imprint on my childhood brain on Saturday Mornings. You know, the awesome ones, like Shaolin Master Killer, Clan of the White Lotus and the Citizen Kane of old Skool Kung Fu Movies: The Five Deadly Venoms.*

The Target at PG Plaza, while slightly sketchy, is actually a much shorter drive from Columbia Heights than any of the NoVa ones. 20 minutes. Max.

You'll have loads of time to watch the ninja movies with no cable, eh?

There's an excellent Target in Beltsville, Md. up 29 from Silver Spring.
Any Kung-Fu film with Tayari Casel in it makes me dribble.

There is a Target in Suitland, MD down Pennsylvania Avenue. It's in a decent shopping plaza and there is also a JC Penney, Burlington Coat Factory, and other stuff around it. It isn't really sketchy at all. From Columbia Heights, however, it is probably more of a drive than Beltsville or PG Plaza unless you can find a fast way out of the city onto 295 south.

You could have just green lined it down to chinablock and gone to the bed bath and beyond. Cautionary note: stay away from the beyond.

JB: thanks, I didn't know that there was one closer. I love me some target.

MA: Yeah, I got too much time now, and I don't want to load up on Kung Fu flix on Netflix if I can buy them for $4 and never have to return them.

twoste: I don't know who he is, but almost anything done by the Shaw Brothers is a classic.

siryn: Thanks. I'd probably go to the one nearest. I don't know my way around MD very well, so if I gotta get on a highway, I'll take VA.

velvet: my inner kung fu geek and I have just had an awkward hug.

RCR: thanks. the only BB&B I knew of is in VA (Pentagon City). I'll check it out.

As the Academic puts it, you better buy the whole stack!