The One Where I Try to Kill My Roommate 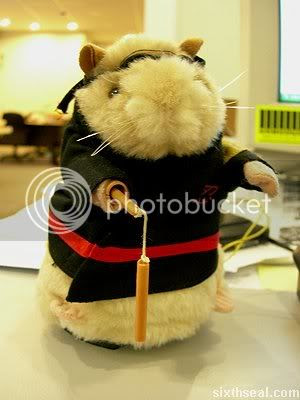 Okay, so I have a fcuking MOUSE in the Impenetrable Fortress. Despite having 3 bedrooms and 2 Baths, this place isn’t big enough for the both of us, so I have decided that he (or she) must die…preferably a slow, painful death so that he tells all his mouse friends that the ninja is not one to be fcuked with!!! It’s bad enough that I have to live in a construction zone, I won’t do it with a roommate who pays no rent, hasn’t signed a lease and hasn’t let me check his FICO score.

This comes at the worse possible time too, my sister is visiting from Florida today and I had hoped to kill the li’l bastard before she got here so that I don’t get gossiped about all over south Florida. I set up glue traps and baited him with mouse poison all over the kitchen (which is where I spotted him). He hasn’t eaten the poison and actually moved one of the traps without stepping in it. This is a worthy foe. But I will stop at nothing to defeat him.

I will take ever-more drastic steps until I reach the doomsday solution. I will set fire to my own house to drive him out. And if that doesn’t work, then I’ll buy some Celine Dion CDs and play them full blast until he runs screaming from the rubble and lives out the rest of his life in a tortured madness. He will die screaming (in Mouse language, of course) “I can’t get that horrible song out of my head…damn you theme song from Titanic, the motion picture starring Leonardo DiCaprio and Kate Winslett. I don’t know why a mouse would know who those actors are, but I hate them just the same. Am I ever sorry that I messed with Ninja….I deserve this sick, twisted death.”

Anyway, I’ll keep you informed on my progress at killing my new roommate.
Posted by HomeImprovementNinja at 1:29 PM

Why am I picturing Bill Murray battling the gopher in Caddyshack?

You need the sonic mouse blasters--that's what finally chased Verbal's (my late rodent roommate) descendents out of the house when they kept coming back to mourn him. . .and pooing under my wine rack as part of their grief process.

Not that I know anything about this, but I've been told that peanut butter in the glue traps works.

My mouse was dumb and just walked right into the trap.

I'm going to report you to animal protection. Threatening to play Celine Dion to the mouse is just going too far! No living creature deserves that.

jm: Let's hope for a quick and deciscive victory...on my part.

jordan: mouse blasters? that sounds painful; where do I get some?

dara: I'll try to get some this weekend. I won't be beaten by something with a brain the size of a pea!

E: It hasn't come that yet. Celine is a last resort. I'll resort to inhumane traps and slow-acting painfull poisons first.

Get the snap traps and lodge a nut of some sort under the claw and then cover it with peanut butter. It is the most effective way I have of getting rid of mice but I will say that it is unnerving to come home and find them squished under the snap... Or waking up in the middle of the night to the inevitable SNAP

For the longest time I insisted that we use Have-a-Heart traps -- the ones that just trap the mouse so you can carry it away to make it someone else's problem. But I have finally caved in to the spring-loaded peanut butter ones, hoping their necks snap quickly and they are not just caught by a broken leg. Mousekilling can be rather sadistic. But then they drive us friggin' crazy, so I suppose they deserve none the less.

Peanut butter is the best bait.

The glue traps will work. But then you might have to dispose of a very angry living mouse that is making very loud noises.

Although, I'm not sure whether that's worse than having to clean up mouse carcasses.

Just get a cat, we have had holes all over our house, and no mice have come in. You have to like cats though, otherwise it's just another vermin in the house.

Want to borrow my cat? She would love to the chance to chase a mouse.

Celine Dion gets the job done every time.

Investment Ninja: What are your opinions on pyramid schemes? Will they make me lots of money or do I need to simply live in the hope that one day I'll get rich on my own merit?

Celine... la chanteuse du Quebec!
I applaud her success, but yes she can drive a person mad... or roedent, in this case.

saple: I'm gonna try the peanut butter on the glue traps. I'll work my way up to the snap traps.

barbara: I'm not willing to be humane at this point.

dara: yeah the squeeling is pretty disturbing, which I hope discourages future mice.

derek: I don't think I'm ready for a pet until the place is finished.

Jamy: thanks. I'll keep that in mind. cat's are very ninja-esque.

julie: welcome, new commenter. Yes, she gots the "job" done. If by "job" you mean driving mice insane or destroying your desire to have sex...or will to live.

twoste: no. if you want to throw your money away, send it to me.

raincouver: Yeah, I heard she is the Barbara Streisand of Canada. I don't know if that's a compliment of insult.

You might want to pick up the poison bait. The mouse will crawl in a hole and die leaving you with the odor of rotting mouse flesh. A previous tenant did that at the "Crackhouse" and I was finding dead mice in electrical boxes, in holes in the wall, under cabinets. I use spring traps. Last week I caught 3 of the little buggers after months of nothing. The amount of mouse poop lying around has been considerably reduced but not eliminated. For a quick kill, bait but don't set the trap for a day or two to get the mouse comfortable and used to eating at that spot. Then set the trap.
Take the carcase and put it on the engine block of the next idiot who parks in your space!

The snap traps are the way to go. But it does suck when one gets caught by only the tail and then runs around clattering the trap behind him. When that happens (and it's happened to me twice in the past month) I have a proven technique for finishing the job. Undead mouse and trap go into a brown paper lunch bag. Bag is placed on a cinder block. A second cinder block is dropped onto the first from waist height. I wear a special executioner's hood for this part...but I suppose a ninja hood could work too.

Actually, I think it's been proven that Barbra Streisand kills rodents quicker than Celine Dion. I saw a Mouse on my patio last month. The next day humane/inhumane/whatever black poison-packed boxes were dispatched. As a mouse-a-phobia sufferer, I'm not sure what terrified me more: the site of the mouse scurrying or seeing him return (dead) in my dog's mouth.

You can get the mouse blasters at a hardware store--I know the True Value on 17th has them; I'm sure others do as well. They emit a noise that humans can't hear, but will drive mice crazy, and make them leave.

This is all sounding eerily familiar. Just call the exterminators. Or call my roommate; he's pretty good at smoking out the rodents.

gary: Thanks. I think this stuff is supposed to embalm them when it kills them, but so far "Sho Kosugi" has been too smart to eat it.

bill: I'm getting some snap traps soon. He's not falling for the glue and wont eat the poison.

fc: I didn't know dog's killed mice. I thought only cats did that.

jordan: thanks, I was wondering where they sell them.

Heather: If s/he wants to come get my mouse/mice, please be my guest. I'll repay him/her in beer.