Believe it or not, I actually got some stuff done this weekend. I did some mudding, sanding and painting. The scaffold I bought last year came in really handy. 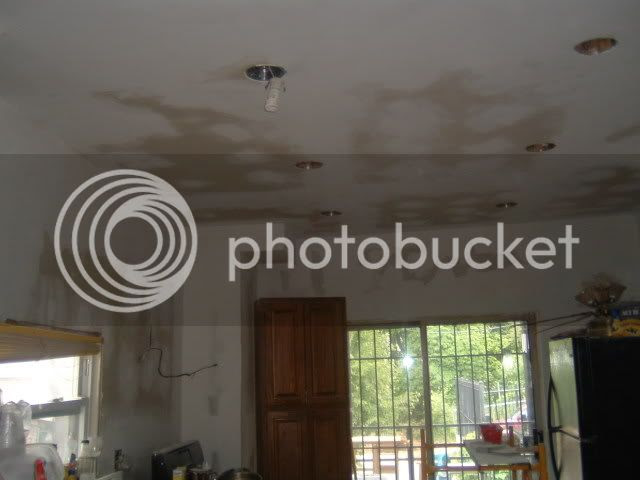 After some MORE mudding to fix the bad drywall job that the contractors did, I had to sand this room. Sanding the drywall sux. I probably hate it more than I hate plumbing. If I had a choice between a weekend of sanding and getting kicked in the nuts by a girl with pointy shoes and freakishly muscular legs, I would probably take the sanding, but it would a close call.

I have this really cool Darth Vader looking respirator/dusk mask bu I didn't know where I put my dust mask so I did it without one. I was covered in dust and I breathed in a lot of it in. I looked like a powdered doughnut when I was done. A really sexy anarcho-capitalist powdered doughnut. I really hope that stuff doesn't cause cancer. 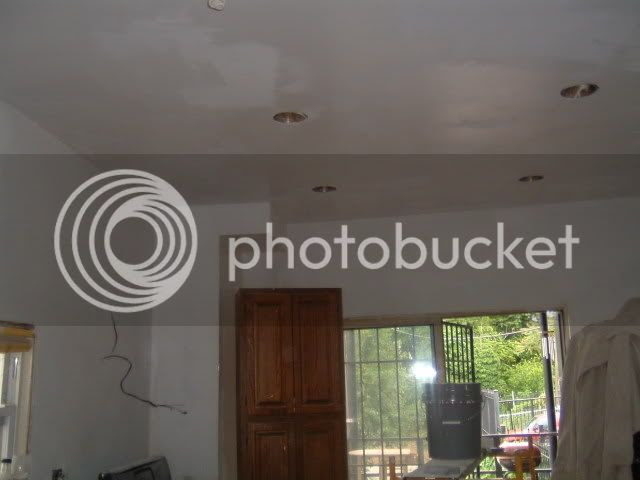 Then I primed the kitchen. Now it's ready for painting. But the primer sorta looks like paint, so I'll probably leave it like that until I install the cabinets.


In other random news. My blog was mentioned in the Express again. The link is Here.
(I'm adding the link so that I'll know where to find it when I'm looking for it). Man, if I had a dollar for everytime I was mentioned in the paper, I'd have $3 right now. That would rock!

Okay, here is something completely random. My friend, we'll call him "Wayne" (even though his name is Matt), took part in a 48 Hour Film Contest (the task is to write, cast and shoot a film with certain required elements within 48 hours). Random Facts aboout Wayne:
Anyway, Wayne used to keep his sanity by taking creative writing classes at night after doing mind-numbing legal work all day. These classes consisted soleley of sexually frustrated women in their 40s and 50s...and Wayne. Every woman would write variations on exactly the same story: A bored housewife (who's in her 40s or 50s) has a workaholic husband (accountant, lawyer, etc), and she ends up having an affair with a younger muscular guy (who is always latino or italian) and works with his hands (plumber, bricklayer, etc.). They always end up doing it in the big house that the husband pays the mortgage on. When Wayne was comtemplating marriage he told me this story and said "Is this what I have to look forward to? I'll work myself to death at the office while my wife lusts after young olive-skinned repairmen?" (see, unintentionally very funny). Anyway, Wayne shot a movie ant it premiered at this film festival that was part of this contest. Here is the description and link below.

I thought you might be interested in viewing the film I co-wrote for the 48 Hour Film Contest. I was also unexpectedly drafted to play a role. The film was screened last night at the AFI Silver Theater. It had to be a 4-7 minute film, written and produced in 48 hours, with 4 required elements:

The film can be viewed by clicking the link below. I hope you enjoy it!

(the film has a test pattern for the first 4-5 seconds, so just ignore that and play the rest. Wayne plays the Camera Guy).

Posted by HomeImprovementNinja at 10:54 AM

I keep forgetting that in addition to being a home improvement ninja, you are a movie star. You would think the Arlington police would consider that before issuing tickets.

Very cool before/after pics of the ceiling, too. Thanks for the link to your "movie."

Thanks Reya. Actually, I'm not in the movie. It's my friend Wayne's movie.

Although I *AM* in Chris Rock's "Head of State" movie. I'm surprised that my role an extra didn't get me an Oscar for best supporting actor. That movie would suck without me as Urban Youth in it. Actually, it sucked even with me in it, but it would suck even worse if I wasn't in it.

WOW -- Express LURVES your blog!!! I sent them in a comment today saying, "Start reading MY blog, goddamnit!" No, I'm just kidding. It said that all these people who are like FREAKING OUT about the woman's comment on Monday suggesting that there should be a separate metro car for children was just trying to make a point. (Which would be: EVERYONE - adult, teenager, child, black, white, Latino, Asian, WHATEVER - just shut the hell up while you're in a tight, cramped space with 1,000 other cranky people.) Not using those exact words but...here's to hoping that they pick me for tomorrow's paper!!! Do they ever ask your permission, or tell you they've used your stuff? How do you find out you've been quoted?

bananagirl, I just read it on the metro so I notice it when I'm in there. You wouldn't necessarilly find out unless you saw it or someone gives you a heads up.

Tom, "Wayne" here. I'm very offended that you named me Wayne. Did you know that 59% of all serial killers have the middle name Wayne? This is second only to the number of guys with mullets named Randy. Coincidentally, 73% of all of them live in Florida, where weird stuff like gator attacks and shark attacks and executions and Terry Schiavo and the Bushes happen. The rest of them live in Texas, where the remainder of that weird stuff happens. I'm also not sure what to make of your "unintentionally funny" remark. Are you laughing with me or against me, I mean at me? Maybe I'm being intentionally funny. Maybe I'm just a funny, funny guy.

Oh man, I'm Catholic too (sort of) and you just made me laugh so hard that I even got some dirty looks from the Bossman.

Waye, errr, Matt, it's a compliment, as in "Wayne's World." That Spinal Tap Halloween costume looked like Wayne from WW.

Blonde menace, thanks. Yeah, I'm only sorta catholic, but I'm still allowed to make the jokes forever since I attended catholic school.