Well, in case you are wondering what ever happened to the parking ticket I got from the Arlington Parking Nazis, it was dismissed. That's $40 less that the totalitarian government of Arlington Virginia will have to oppress it's citizens. The ninja strikes a blow for freedom! I totally feel like the guy in V for Vendetta now. Except that I fight oppression using my computer and ink jet printer instead of bombs.

Plus I don't keep hot chicks with shaved heads, like Natalie Portman, locked in my basement, which, let's face it, is kinda weird.

He's got really cool hats though.

Longtime readers will remember that when I first started blogging, I also beat a red light ticket from the fascists at the DC government. I'm starting to think my legal skillz are invincible. I'm like the Clarence Darrow of municipal court. Hopefully parking nazis and traffic cops everywhere will read this and realize that giving me a ticket is futile and they might as give up. With my skillz, I could probably show up to the police precinct, drunker than a Kennedy, in a stolen car, with a dead hooker in the trunk and still get away it.

Before I get angry letters about making dead hooker jokes, let me say that this is purely hypothetical. 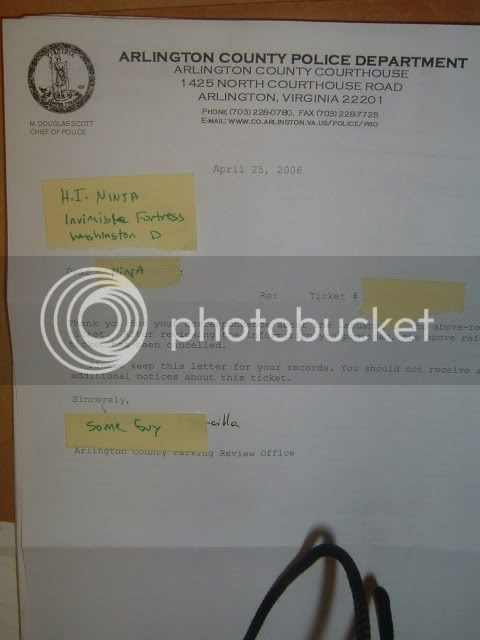 Here's a copy of the actual letter, with the identifying info removed so I can retain my stealthiness.

And, yes, I did edit it out using post it notes because I don't know how to use photoshop. I told you before that my awesome skillz don't pertain to computers.


*It should also be noted that ALL MacGyver episodes are equally awesome, so it's impossible to single out a best episode. It's like saying "infiniti plus one". This, of course doesn't apply to the greatest MacGyver episode of all time: Three for the Road. Which is, ironically, exactly like infiniti plus one.
Posted by HomeImprovementNinja at 5:09 AM

Good job dealing with "the man"!

There was something about ninjas on yahoo news yesterday...unfortunately I couldn't watch it at work and now the link is gone, and I couldn't find it again. Here is another piece of news instead:
[URL=http://news.yahoo.com/s/ap/20060516/ap_on_fe_st/netherlands_bear_eats_monkey;_ylt=Am6C.U251DUyv6OObeqLJcjtiBIF;_ylu=X3oDMTA5aHJvMDdwBHNlYwN5bmNhdA--]a[/URL][URL=http://news.yahoo.com/s/ap/20060516/ap_on_fe_st/netherlands_bear_eats_monkey;_ylt=Am6C.U251DUyv6OObeqLJcjtiBIF;_ylu=X3oDMTA5aHJvMDdwBHNlYwN5bmNhdA--]Link[/URL]
(after all, bears eating monkeys are as cool as ninja stuff)

Sorry for the mess up before...I tried to make a neat link and didn't work. Here is the link:

So how did you beat the system? Shuriken? Tekagi? Kunai?

Was the hooker in the trunk a Thai one, who died while smoking a cigarette from her hoo-haa?

But seriously, I think you're right. Outdrinking a Kennedy is impossible.

You are an official hero for beating those tickets. Way to beat the system!

Beating parking tickets is the best thing in the world. Even better than eating good icecream methinks! Well done!

Oh and I agree. I doubt it is possible to be drunker than a Kennedy, unless you are a student in Finland that is... I'm serious. Google that one. There's apparently a whole drinking week where participating students wear colourful overalls so that police and council officers don't bother them when they're sleeping in gutters around the city.

And I've had this independently confirmed by a former participant.

First of all, how can the best episode of MacGyver not include Murdoch? I don't think it's physically possible, but I could be convinced otherwise.

Second, a hearty congratulations on getting out of your parking ticket. I can't think of a greater feeling than beating the law, except of course the feeling you get when the pregnancy test comes back negative.

Dan said...
This comment has been removed by a blog administrator.
12:22 AM

gui, yeh. Anyone who doesn't like MacGyver should be shot (which is ironic since MacGyver never used guns).

bonk, they say the pen is mightier than the sword. I'm not really sure who they are, but I'm sure they said it...and the word processor is even mightier.

hustleman, thanks. see why I gotta be careful with dead hooker jokes. That's how rumors get started.

e, thanks. I don't know if it's better than giving the prime minister a piece of my mind (not that I have much to spare), but it does feel good to stick it to da' man.

the beligerent one. The absence of murdoch is problematic, but I'll do a post on this episode one day. It's awesome enough to survive his (and Terri Hatcher's) absence. Plus this isn't one of those episodes where some macgyverism fails. (those episodes are sacrilige). As for the pregnancy thing. I've never thought I might be pregnant, so I really can't relate.

Also, Amish teenagers might be able to outdrink a Kennedy. I mean, these kids go NUTS.

Can you imagine McGuyver renovating a house? Those skillz would be mighty handy.