Well, the Ninja Mitzvah went well. A fun time was had by all and everyone made it out with the same amount of fingers and toes that they came in with. Who could ask for more than that? After the ceremony, following our family’s tradition, we infiltrated a rival clan’s celebration and killed everyone who refused to support the Meiji Emperor’s appointment to the Japanese throne. Most of the people at the wedding had no idea what we were talking about so we killed them too. At first the bride and groom were upset, but when they realized that we had decapitated the guy who owned the catering hall and that they wouldn’t have to pay the balance of their bill, they invited us to sit down and have dinner with them. Since there were many dead guests, there were plenty of entrees to go around. You had a choice of herb crusted chicken or filet mignon. Good times!

Back to the story: 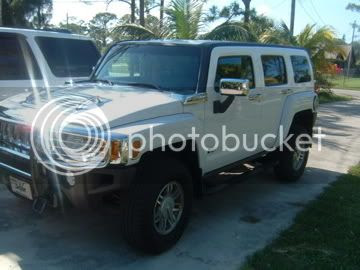 On the way down to the event, I had some blogworthy events. I got to drive the Ninja Heavy Armoured Assault Vehicle (“NHAAV”). I wasn’t used to it. The windows are small and it’s got more blind spots than Bush’s Iraq strategy, but it’s awesome to drive. Within the first 45 minutes, I almost got into an accident on the highway, but the NHAAV is so powerful that I didn’t even care. I felt invincible. I felt like I could take any lane I wanted and people would have to just get out my way because my NHAAV would demolish their little hybrid Toyotas, I felt like, well, like one of those assholes who drives a hummer…and I liked it. I think I could get used to being an asshole. Now I know how my brother feels 24 hours a day. I began to think about correlation and causation. Maybe people didn't drive giant SUVs because they are assholes, maybe they are assholes because they drive big SUVs. I asked my Dad how he liked driving the NHAAV.

Ninja: Did you ever run anyone over in this thing?

Dad: No…not yet. Heh heh heh. Don’t put that in your blog. 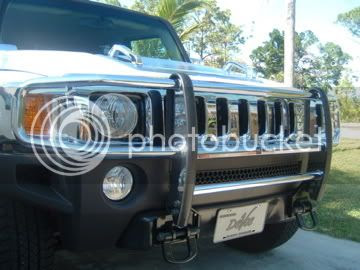 Oh man, look at this grill. This thing would be invincible in a zombie attack. You almost want the undead to rise up and roam the earth just so that you could show them you are not one to be fcuked with.


On the way down, I also saw a car on the side of the highway that was literally on fire. The woman ran out of her car and people were stopping to help her. I tried to get my dad to stop the NHAAV.

Ninja: Oh man! That car’s on fire, quick pull over!

Dad: Are you gonna try to help her?

Ninja: No! I wanna take a picture for my blog!

Unfortunately, Dad didn’t want to stop and by the time I got my camera out of my bookbag, we were passed the scene. Here is a picture that Mysterygirl drew to give you an idea.

I described what happened and she sent me this pic. I forgot to specify that the people were wearing clothes so she, apparently, drew them naked (but thankfully not anatomically correct, because this is a family blog). In her defense, I guess I didn't say that weren't naked, but (other than people in New Jersey) what kind of mental defective drives down the highway naked?


The ceremony itself was pretty interesting. I'd been to a few Bar/Bat Mitzvah parties when I was a kid, but never to the actual event. I got to phonetically sing in Hebrew, how cool is that? Shabat Shalom, bitchez!

Because photography is not allowed in a Temple, I was told by some of my Jewish relatives to get as many shots off as possible before the rabbi stops me, then plead catholic ignorance at the sacrilege I was committing. This didn’t seem plausible to me, because you’re probably not allowed to take pictures in Catholic Church either (actually, you’re not allowed to do much of anything in Catholic church except wallow in your own guilt). But I did it, and I immortalized my cousins’ transformation from boys to men.

At the Bar Mitzvah party, there were the usual jokes about the incongruity of their chronigical age with their being considered men. In the jewish faith, doing a bar mitzvah marks your transition from a boy to a man. Since I'm not jewish I became a man when I hunted and killed a bear using nothing but a compass, a bow and arrow and a loin cloth. Embarrassingly, I don't know how to use a bow and arrow, so when confronted by the bear I had to think of some other way to kill him. So I took off my loin cloth, and when the bear was distracted by staring at my junk (it was a female bear), I threw the compass at it's head and killed it.

Since my cousins are now adults, as their attorney I have advised them not to mention this ceremony if they are caught with a with over a kilo and the judge is considering charging them as adults. I have also sent a retainer to the Playaz to establish a legal defense fund for them.

After the event, I spent some time hanging out with my friend Double Down’s little sister, who is now semi-semi-famous. Apparently, she was in some commercial which is on TV in NYC every five minutes. She plays “Mairsol” a girl from Puerto Rrrrrrrico who is married to Russ, from North Dakota. This unlikely pairing required them to get a phone service with a long-distance plan that would allow them to call his redneck family in North Dakota and her racistly stereotypical Latin family in Puerto Rico for the same basic calling rate, with unlimited night and weekend calling. It’s for some Cable company in NYC which I’m not familiar with. (when I lived in NY, it sucked so bad that we didn’t even have cable…okay, I made that up, we did have cable, but it still sucked),

Anyway, it turns out that she is also a veejay on MTV. And she's living in sin with some semi-famous Latin music singer who's got a record deal with Sony. You can here some of his stuff here.


The reception was out of this world. I’ve seen a lot of weddings that were nowhere near as extravagant as this. It cost as much as my sister paid for her first house in Florida. I didn't take a picture of all the cool stuff, but this I had to immortalize: 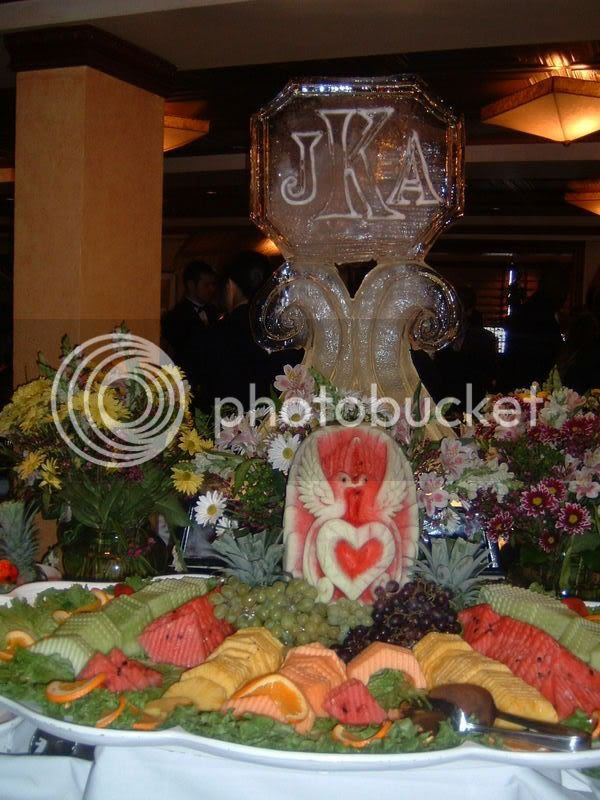 The ice sculpture is something else, but those birds and the heart are carved out of a watermelon. Right now there is some guy in Long Island going to bars and talking to chicks and when they ask what he does for a living, he says "I make watermelon birds." Wow.

And here are the monogram thingies at the tables. I didn't take a pic of all the food (because I'm not a loon) but this was interesting. Look at the chocolate covered strawberry. They used white and dark chocolate to make it look like a tuxedo. A little chocolate tuxedo. 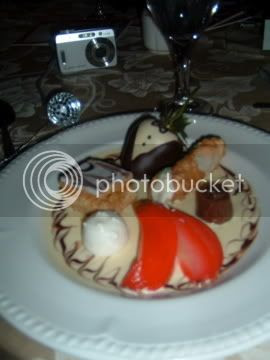 I'll post the family pics next time because there are a lot of them and I suck with pictures. I know what you're thinking. I shouldn't have done Part 3 before Part 2, because now what will I call the post with pictures. That's a good question. We'll either call it Ninja Mitzvah Part 2.5 or maybe we'll call it the Appendix. Sort of like the reference section of a book, except with pictures of good looking people instead of the names of books.
Posted by HomeImprovementNinja at 10:46 AM

I've seen that commercial. It's on ALL the time. But I thought they were a real couple. They showed footage of their wedding.

Any man who can carve a bird out of a watermelon holds the key to my heart.

Oddly, the same reason I drive an old, shitty Ford truck is the same reason your dad drives a Hummer. It's big, ugly (enough to look cool), and everyone is afraid to cut me off. My comes with the awesome benefit of being ridiculously loud.

You in the Temple sneaking in pics before you get booted is like me at the strip bar taking pics of Brianna Banks before I was manhandled and thrown out on my ass!

anon, not a real couple. From what she told me, they filmed a whole fake wedding just for that few seconds of footage.

julie: really? what about clay? I can do birds with clay...I think.

casey: my brother had a '71 Buick for the same reason (supposedly). He's a poster for road rage, but he really doesn't need an excuse to be an a-hole.

HIN.. can you get the watermelon dudes number??
tell casey... im ridiculously attracted to really loud ugly trucks.. i kinda wish i knew why..
..seems.. im using your blog as a my own personals section of Craigs List..
sorry..
xoxo

When I was in college, I had an old 1971 Chevy C-10 pick-up truck. Beat to hell and back, rusty, and not something you'd expect to see a 19 year old girl driving.

I was late to class one day and I was trying to park, this asshole in a Mercedes tried to take my spot. AS I was parking! I rolled down my window, smiled, and said, "I'm parking here. Do you really think I'm worried about my paint getting scratched?" You should have seen the look of horror as he nearly pooed himself trying to back out of my way.

What, was he going to KEY my truck? *LOL* (I could see the ROAD through the floorboards, mind you!)

You can call me, 'Sir': thanks. I think it's my high point, or low point, depending on how you look at it.

suicide_blond: well, at least somebody's gettin laid from my blog.


MadMumbler Mommy: No, I think people who drive those little expensive cars were assholes even before they bought them.

I love chocolate covered strawberries that have tuxedos... take any home? ;-)

DC Wedding Photog: Nope. those things are just too delicious to save till later.

Great post! I particularly like, the image of, "So, what do you do?" "I make watermelon birds." This rocks!

How did it all work out?

We blew the retainer on hookers and frankly had no idea where it came from.