Truth is stranger than fiction

There are things that one is never too young to learn. Among those, are fixing stuff and killing people. I bought my nephew toy power tools because he's already four, so he's old enough to tackle some rudimentary home improvement projects. 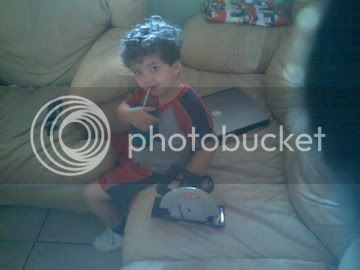 "Okay, I'll make you a shed, but I'm a union carpenter, so I gotta overcharge you, even though you're family."


I have fond memories of going hunting with my grandfather in Argentina when I was a little five year old. I remember when he killed an animal and ritualistically rubbed some blood on my cheeks to honor the occasion. I cried when he did it. But not because it's terrifying to a five year old to watch an adult kill something in front of you and wipe his bloody hands on your face. I was five, but even then I was too much of a man to cry for no reason like that. I was crying because, I, like, uhhh, pulled a muscle when I was uhhh, working on a transmission or something. What?

Anyway, I used to think that five years old is kinda young to teach a child how to kill something, but apparently I was a late bloomer. There's a guy in Illinois who got his son, Bubba (no, I'm not making this up) a license to own a gun. Bubba is 10 months old, by the way. You can read about it Here.

I have no idea if li'l Bubba can fix stuff around the house, but if he can handle a gun at 10 months old, I think that makes him an honorary ninja.

Posted by HomeImprovementNinja at 1:37 AM

We even got the news about here in Australia. It was all over the TV. Insane.

Well, at least it didn't happen here in Florida!

I've said this before, to no avail, but there really needs to be a rigorous application process for having children. Although it never crossed my mind prior to your post, I suppose one of the questions on the application could be, "Would you be open to registering your toddler for firearm ownership?"