Okay, I need some audience participation from the people in DC. I need to buy a Tuxedo sometime in the next couple of weeks. Now, read that carefully, I need to BUY a tuxedo, not rent one. I won't wear someone else's pants. EVER. There are three things that you should never rent or buy used:
So what I need from you people is a place that sells tuxedos. I went to one tuxedo place--the one on P Street next to my tanning salon (stop laughing, you know you go there too)--and the guy showed me the rentable tuxedos, but the ones that you can buy only exist in the sample books. And I'm not spending that kind of money on something that I can't try on first. I also tried that JPress place on L Street. But they only had one tuxedo. ONE Tuxedo!!!

Now, I know that some people look like douchebags, no matter what they are wearing. 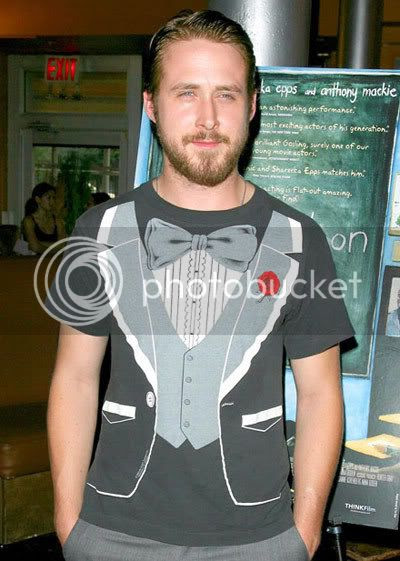 Yes, I'm talking about you, Ryan Gossling. And since you're dating Rachel McHottie, who is second only to Judy Greer in my affections, this won't be the last time you are mocked on my blog. So get used to it, asshat.

Anyway, some people look like douchebags no matter what they wear, but I am not one of those douchebags....errr, people. I want a tux that makes me look good.


So here's what I'm looking for:

A nice classic tuxedo. Nothing funky 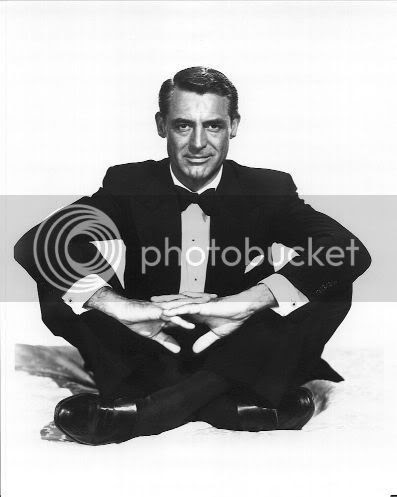 But nothing that makes me look like a pussy. 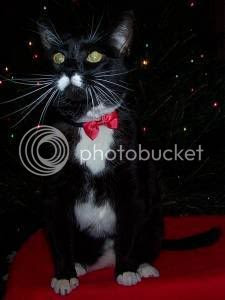 In terms of price, something midrange. (like $600-$900) I don't need an Armani Tux, but I don't want a cheap one either. It should be something that I could wear again (although I probably won't).

So do you know of any places in DC/MD/VA that match that description?
Posted by HomeImprovementNinja at 8:17 PM

Is there a Brooks Bros in DC? I think they carry them. Where are you going? Why do you think you'll only wear it once? I made my husband buy one because he looked so HOT in it, he would wear it around the house (foreplay).

Also, I think David's Bridal has a brother men's chain store but I don't know the name. You could call David's for advice.

Will you show us a picture when you get it?

Please make sure you take the shoes you intend to wear with the tux when you try it on. If you plan to buy the patent leather shoes that go with the tux, buy them first. (Wear your dress socks when you try on the shoes.) There is nothing worse than tux pants that are too long or too short.

After Hours Formalwear is affiliated with David's Bridal. I don't know if they sell tuxes, if there is one in DC you could call and ask.

If you need it for the party tomorrow, it's WHITE TIE.

Kathy from NJ just scared me with her talk of foreplay then her signing the 2nd comment as "Love, Mom."

I totally forgot what I was going to say.

Kathy, thanks, that's helpful. It's for a friend's wedding at the end of the month, which is black tie (not optional).

anon: take your time, it will come to you :)

It might be a little more high-end than you want, but it could be worth checking out.

Macy's, Nordstrom's, and even the Men's Wearhouse carry them.

go to nordstroms..they have a realllly knowledgeable experienced staff (they are used to dressing men not prom dates).. a good selection of great quality ones.. and pretty much wont let you buy anything that makes you look like a pussy...
also...they will do all the alterations just right..
it may be expensive..but ..
in this case.. i think you get what you pay for
xoxo

Ninja...The Tux that Mr. Hudson is wearing is perfect. Simple, yet powerful and classic. You can't go wrong with that one.

I have no tux advice but thought I'd pass along that Ryan and Rachel are "on a break".

Going to the prom?

You can't really go wrong with the ones on www.menswearhouse.com. Don't forget the rest of the stuff - tie, shirt, cummerbund/vest. You can't really go wrong with the full collar (vs. short flippy one) and basic black bow tie. You can spice it up with a vest if you like although I'd stick with black or another basic color. The vest is sometimes easier than the cummerbund and makes you still looked dressed up after the jacket comes off.

Did someone say "audience participation" in selecting a tuxedo?

The Playaz can only recommend this model.

And don't buy anything from this guy (Lord West Tuxedos).

Sorry I can't offer any particular help, but just the fact that you know better than to goo after the CoxArquette/Gosling look means you're on the right track.

So, whose prom is it?

Rental tuxedo pants won't actually touch your crotch if you wear underwear. That might be a cheaper (not to mention better)investment than a tuxedo.

I would try Nordstroms, or just rent and expensive one--

I agree with Mystery Girl that the pants will not actually touch your crotch if you wear underwear. BUT, I think that you will not be comfortable in a rental, therefore you should buy one. And you will probably look and feel so good in it that you'll wear it more than once. Don't dilly dally shopping for it - you'll need time for alterations.

I really hope you'll post a picture - you can block out your face if you don't want to go completely public.

Please let your friend know that I am not your mother, just old enough to be.

Nordstroms is the place. They'll make sure what you buy actually fits which is exactly how you can look just as cool as Cary Grant. I hope you'll allow the paparazzi to capture you in your elegant attire. Please post pics? Please?

Dorothy Parker: it looks a little too rich for my blood. Maybe if I switch jobs.

Anonymous: thanks. Men's WAREHOUSE you say? That sounds macho, like me.

suicide_blond: thanks. I'll check out Nordy's, but I'll do it last. I can't walk out of there without buying something so even if I don't get a Tux there, I'm afraid I'll end up with a suit I don't need.


mmafan: yeah, I don't something that will look silly in a year or two.

Carrie M: Sweeet. My site is already number one on google searches for "Rachel McHottie", so it's only a matter of time before she finds me and decides to date me...or take out a restraining order.


K: thanks. My friend reminded me yesterday, that with tax, shirt, shoes and cumberbund, it's gonna cost more than I think.


Anonymous: thanks, but the link doesn't work.


John: thanks for the tip. I didn't know that.


Phil: I don't think I'm classy enough to pull off a frilly ascot. The Playaz are who they are because they can do things that other can't.


honeykbee: it's my friend, Lord of the Rings, wedding.

mysterygirl!: True. I'm not saying I'd go commando to a wedding, but I still think I'd like that option.


Momentary Academic: Thanks. I will check out Nordy's.


Kathy from NJ: Thanks. I'll think about posting the pics.


Reya Mellicker: Looks like everyone loves Nords. I'll think about posting the pics :)

actually hit up joseph a. banks at union station. they've always got good deals. nice tuxes too. do it. fo' real.

I'm late to this party, and I don't feel like reading all the other comments. Therefore, I apologize if this has already been written...

Go to Neiman Marcus, Saks or even Nordstrom. The guys who work in their men's suits/formal departments are compensated quite well for their expertise and will probably be knowledgable enough about their products to help you find something that makes you look good. Take a drive to Tyson's Galleria. Don't mess around with Friendship Heights.