Shoes, Washing Machines, and The Man.

So Saturday I went to the mall to take care of some errands. I bought a new washing machine and it's getting delivered this week. The impenetrable fortress will once again be fully operational and able to repel any enemy onlslaught in sparkling clean metrosexual garb. My enemies will tremble at my freshly laundered Diesel jeans.

Best Buy was running some kind of promotion where they weren't charging tax that day, which pleased me because libertarians HATE giving the government money. WHen I saw the receipt, however, I noticed that there was indeed tax on it, but the store was paying it.

Ninja: I thought you said there was no tax today.

Salesman: There isn't...Best Buy paid it for you.

Ninja: Yeah, but it doesn't matter...I thought I was stickin' it to The Man, but I'm not. You're still paying him. The Man still get's his money.

While I was at the mall, I stopped into the Apple store, which is like my crack den and checked my gmail account. Within the next week or two, I have decided that I should get a laptop. I didn't feel like dealing with people that day, but I'll do some research online and order it through work so I can get my goverment hack's discount on it.

Since I was at the mall, I stopped into Designer Shoe Warehouse, which, as the name implies is a warehouse of designer shoes. I needed a pair of black shoes, but the next thing I know I walked out there with 3 pairs of shoes, in exactly the same color. 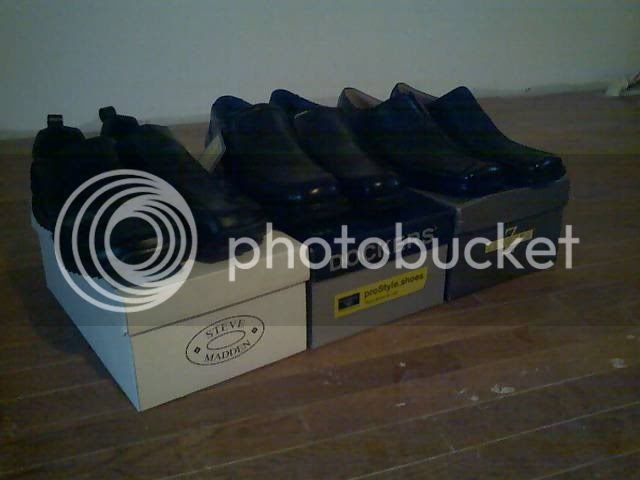 I was thinking I could use the Steve Madden pair for informal stuff, I could abuse the Dockers when I salsa dance, and use the formal pair for work. But then I thought: Why did I just buy three shoes in the same color? I've never bought 3 pairs of shoes (in the same color) all in one day. What possesed me to do such a thing? I don't have a uterus?
Posted by HomeImprovementNinja at 12:43 PM

Buying three pairs of shoes in one colour it a man's way of expressing his feminine side. LOL!

You can't have too many pairs of black shoes, is what I always say.

You mean the stores have to pay taxes? That seems confusing...

Also, buying a pair of shoes solely (:-)) for Salsa dancing is either cool or a bit girly. I can't decide which.

Maybe you DO have a uterus. You should get that checked out at the doctor. Or what you should do is get a foot tattoo (I swear, TOTALLY not gay!) and then it won't matter what shoes you wear b/c it will always be stylish. :)

you know what i love about how manly you are convincing us that you are in this statement....
one : Designer Show Warehouse, why not just DSW? Because DSW is the international acronym known all over the world for women ..even in India because u know...they make the shoes hahah that was too cruel lol sorry i keep lol'ing....lol, Designer Shoe Warehouse is for ManLy MEn, lol
two: TAX FREE?!!! A true sign of a stingy woman..like myself, not only stingy but if its gonna be on an insanely pricey item and a tax free special makes me feel better spending my money....

three: THREE SHOES!!!??? I been with my man for 5 years and have two older brothers i have never seen em buy 3 pairs of shoes on the SAME DAY .... all three in black...thats normal i do it all the time..then again men dont really loooooook for color its like its not an option for some... hmmm

i just thought i should point some of these out...lol but really in the past 3 weeks this is a really funny blog.
Hey whatever happened to your cable company? Did u get a new one or what i dont get it...Oh im not sure if you have cable or not, but i just thought you might want to start watching a ridiculously lame show called "the flavor of love 2" you have too...."reality" tv is taking it to another level...this one lady shitted herself supposively on the television, and Flavor Falv is like "what is that smell" hahahah
Its on VH1

You're right. That's not "tax free" at all. The consumer is paying somehow. TANSTAAFL

e: You're assuming I have a feminine side, I'm all man, baby!

Dara: yeah. THat place is strange. So many shoes.

jamy: Well, now I can never run out of black shoes.

MA: Yeah. they say black is the new black.

rebecca: It's obviously cool. I'm not girly. There's a fine line between metrosexual and girly and I'm the right side of it.

DCOE: If I did have a uterus, does that double my chances at having kids?

kikimia: I'm man enough to buy shoes and not think anything girly of it. I'm so manly, I could probably be a testosterone donor.

brando: exactly. It's not free, it's included in the price...like free refills.

Buying a Mac Book? Check this out first to avoid the lemons:
http://www.macintouch.com/reliability/macbooks.html#results

Hmm...I'm gay, and I have never bought three pairs of shoes, in the same color, on the same day.

I do have a lot of shoes though, so that keeps my queer.

Aw, your expose has now ruined my lollipop illusion of the tax-free holiday being a good thing. But the stores are still paying it? Is that to make up for all the tax breaks they get otherwise? Brando's right - you should always expect to pay for your meal.

cool!...I too have couple of black timberland shoes and love wearing black