Okay, I got a couple of questions about "underpinning" in my last post on the Sudanese guy. In case you are wondering what it is and why it upsets me, here is an explanation. Imagine you are standing on a ladder and can't reach something. Your friend comes over and tries to help by shoving a few phone books under the ladder--while you're standing on it. That's what underpinning a house is like. You dig beneath the foundation and try to shove some bricks under there before the building falls on you. The idea is to make the basement deeper so you can turn it into an illegal rental unit. Anyway, it is as dangerous as it sounds, which is why the Sudanese guy pisses me off (that and the whole dumping dirt in my driveway thing...plus the genocide).

So I was watching the news the other day and NBC reported that a rowhouse collapsed in DC when they were digging beneath the foundation to underpin it. That's one of the reasons I was so pissed off that the Sudanese guy was hiring people from a parking lot in Home Depot (the corporate Satan) to do the same thing at his place.

Dead bodies are never good for resale value, even if it's a few doors down. I mean, try being the guy who's selling a house on Jeffrey Dahmer's street. "Oh, the serial killing cannibal? No, that's two houses up the street...this one has no dead bodies...no, sirree." So if that guy wants to kill his fellow countrymen, let him go back to the Sudan and buy an AK-47. Don't let them die anywhere that could possibly have an effect on my property values.

In other news, a house that is RIGHT by the ninja fortress partially collapsed the other day too. From the looks of it, it looks like a bad underpinning job too. 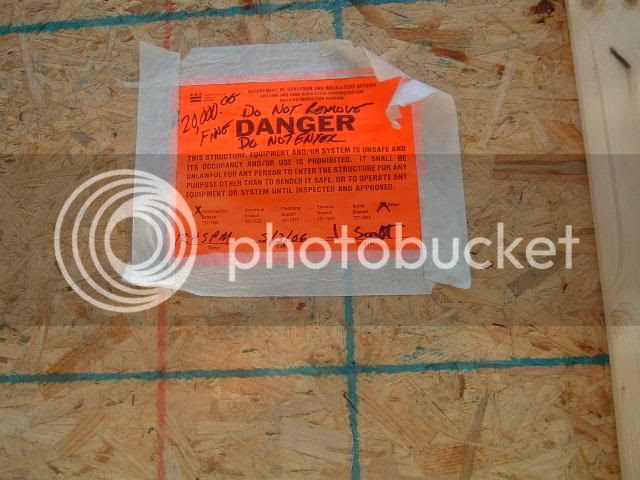 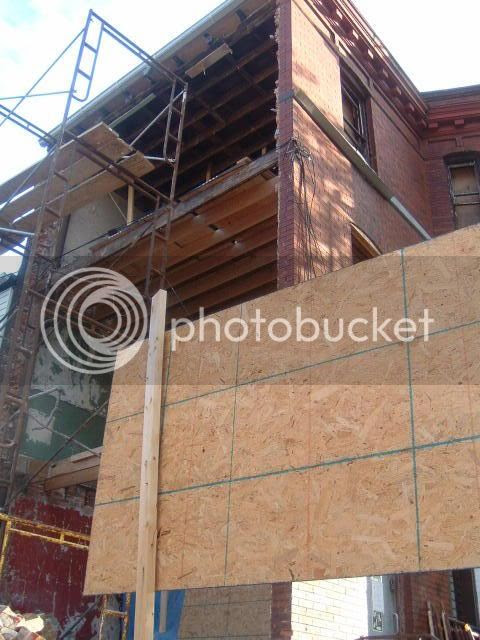 Here is what it looks like from the side. As you can see, it's sorta' missing an entire wall. Now, I'm not an architect or anything, but I think having a house with only 3 walls is probably not a good idea. That's like buying a car with no steering wheel or taking abvice about mental health from Angelina Jolie. 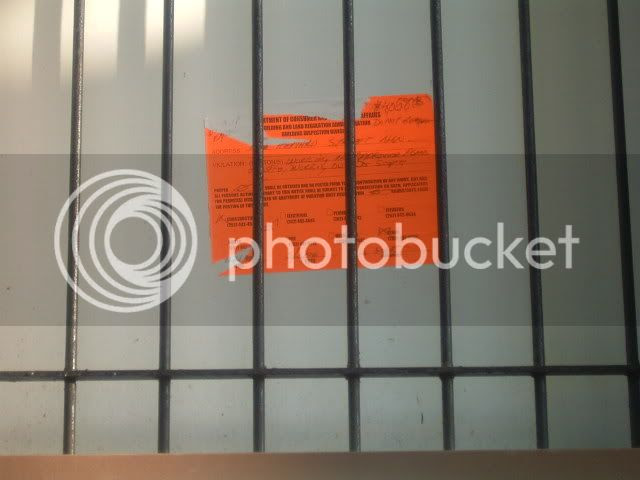 This is stop work order. Seeing one, even on someone else's place gives me the heeby jeebies. Partly because it involves fines and bureaucrats but mostly because it involves telling you to stop doing work. Telling a latino to stop working is like telling an Arlington Parking Nazi to stop being an asshole. It can probably be done with some intensive training sessions, but why change human nature?

Update: They got some engineers in and did some bracing and they put the bricks back up now. I'll take a picture of it when I have some time. Also, I'm in the process of setting up a spinoff site for my ninja stock picks, but I may post the first installment here in a day or two. Stay tuned.
Posted by HomeImprovementNinja at 12:07 PM

Having lived with a realtor for several years, I can assure you that the 3 wall house can be moved if it is advertised as having "TONS of light," and that as long as the dead bodies aren't in your house, they add value by increasing the "historical interest" of the neighborhood.

The collapsed row house is in my neighborhood, on A St. SE between 8th and 9th. The day it happened, there were at least 15 emergency vehicles in the intersection of 8th and A; the entire block was roped off with caution-caution tape. I asked one of the policemen why. He said other houses could collapse because of the work. People were spooked, something that doesn't happen often on the Hill.

Besides the stop work sign, nothing seems to have been done to fix the damage. The caution-caution tape is gone and life continues as if nothing ever happened. What do you do after something like this happens?

You get an engineer to make sure that your own building is structurally sound.

So he was throwing bricks under there and not concrete? Greeeaaat. Of course, the illegal basement makes sense now.

jordan, you dated a realtor? really? That's just so wrong on so many levels.

reya, after it falls down, I don't think there's much they can do except knock the rest of it down and shore up the adjoining bldgs.

siryn, he's not close enough to harm my fortress. We share a driveway, but it's a loong driveway. Still, I will narc on him in a few days. I have to get rid of anything that could possibly result in a fine for me first.

oh no--one of my gay ex roommates is a realtor.

I mean seriously. I have standards.

Ninja Man, you make me laugh.

I hope you aren't mad that it took me so long to reply to your email, I feel bad. :( I'm a douche.