I don't think I should've ever installed Sitmeter on my Blog. Now I check it way too often, to see who's visiting and how they got here. Some people get here by asking random home improvement questions like "how do you install a marble saddle". Which reminds me to get that done so I can post about it. Stay tuned you marble saddle people. It turns out my site in number one in google searches for "connect copper to galvanized". Who knew my plumbing skillz would be legendary on the internet? I don't know whether to be honored or ashamed of that...or maybe a little of both.

Other people get here by asking random ninja questions like how you make a ninja smoke bomb? I wish I knew the answer to that, it would come in handy when I reach for my wallet at some clubs that charge $20 cover charges. I could just throw a smoke bomb and disappear into the crowd of metrosexuals, still keeping my 20 duckets. Actually, if you really want to know how to make a ninja smoke bomb, read this. Probably the best ninja question I've seen that googlers use to find my blog is "what do ninjas eat?" 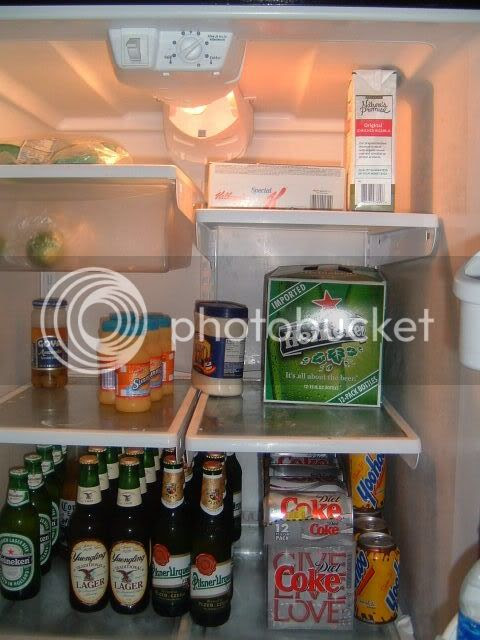 Well, here's a pic of my actual fridge. If you're keeping track:
1) four kinds of beer. (the one's I'm almost out of are Corona's...luckily I quit drinking last saturday).
2) Diet Cokes
3) Sunny D
4) Yoo-Hoos (those are my nephew's, ninja's don't eat those).
5) olives (I don't eat olives either...ever, so those may have come with the house)
6) mayonaise
7) Special K breakfast cereal
8) Organic Soy Milk.

In case you're wondering, yes, my fridge always looks like this.

Now, I should mention that I try to be careful about what I say on this blog because I don't want it coming up in google searches for porn or anything. That's why I was trying to cut down on the dead hooker jokes. But it looks like I was too late. As of now, my site is the number 2 site on the entire internet for people that ask the question "how do you get rid of a dead hooker". (let's all click on my site for that querry so that I can move to number one). Now, I don't know who the guy is in Arizona who has come to my site twice looking for how to get rid of dead hookers, but I am speechless by this.
In other news...I'm both flattered and surprised by the amount of people linking to my site. But I am saddened by someone, who I de-linked the other day, who used to link to me, but now doesn't. I don't know if she doesn't find me funny any more, or maybe I just made one too many dead hooker jokes. I don't know; I can't explain it. I don't understand women at all (which is why I'm still single despite being not unattractive, a fabulous dancer, and a slightly-better-than mediocre lover). But if you don't want to link to me...FINE! There are plenty of other people out there who appreciate libertarian rants and dead hooker jokes...and one possible serial killer in Arizona. So there!

In other news, Judy Greer never contacted me for that date so I ended up cutting down those shrubs this weekend. I can' tpost pics because my computer is all jacked up again. Time to go back to Apple and get it fixed again.

I also have some other pics but until my computer is fixed, no more pics or email. Damn!
Posted by HomeImprovementNinja at 3:39 AM

But why do you keep the Special K in the fridge? Mine just goes on top.

I don't have cabinets installed yet so it's gotta go somewhere. I keep paper towels on top of the fridge, so I keep the Special K in the fridge because there's room there. Putting paper towels in there would look silly.

I don't mind keeping cans of stuff like tuna (to go with the Mayo) on the floor, but I don't want to keep anything that mice or bugs would like out in the open. Maybe I'm paranoid, but I'm a paranoid guy with no bugs or mice.

I appreciate your libertarian rants and dead hooker jokes!!!

Despite the fact that I royally suck at getting in touch with you about getting you your Express (Which I do still have btw), please do not consider it any indication of my love for your blog. You are one of my favorite bloggers. I am just an unreliable deadbeat sometimes.

Except Ninjas should never dis Yoohoo. Yoohoo is the nectar of the Gods.

Oh and that is the most OCD fridge I have ever seen.

Your fridge is very neat! I agree with Blonde Menace. It certainly is the most OCD fridge I've ever seen. I'm kind of jealous in a way. I wish my fridge looked that neat.

You might want to start small with a bag of carrots. They come cut and peeled, you know. A bagged salad? I tease.

I only have three beers in my fridge. And that's because other people brought them. But they are good beers.

Ah yes, sitemeter is a bad addiction! Recognizing it is the first step, what comes next...well, I have no clue!

Blonde Menace: thanks, that's sweet. And you can have as much Yoohoos as you want at my place. I never drink it, so it's just sitting there. You can take the olives too. I don't think my fridge is OCD. But you gotta keep the beer organized. Outta' respect.

MA: If you look above the cold cut drawer, I actually do have a bag salad. I didn't mention it because it spoiled. I keep it in the fridge until garbage day because if I throw it out before it stinks at room temperature.

Oh, and in that crisper thing, you might notice a couple of limes for my corona. Sometimes you need more vitamin C than Sunny D can deliver.

oops. and sweet. Yeah, it's an addiction, but there's no methadone for sitemeter.

Ah no computer, it all makes sense now, hahaha. I emailed you on Sunday night b/c I completely forgot that I have a dr.'s appointment all the way in Fairfax tomorrow, and since my parents live out there they now want to do the birthday dinner thing with me then since I'll already be in the area, so I have no clue when I'll be back in the city. Damn it I miss all the fun blogger stuff!!! I think I may be in Adams Morgan Thursday night but I'm not sure yet, if you want I can give you a call and let you know?

That's a BEAUTIFUL fridge... when I was single, that's exactly what it looked like. Now it's full of all this salad and veggies crap with organic this and free range that.

On the upside, though... I think that I can credit my girlfriend for adding 30 years to my life.

Site Meter is evil. It is funny how people find your blog [search terms].

You're funny. I'm gonna link to you.

Keep up the good fight!

The dead hooker was mine, sorry, I clicked on your link by mistake. And the serial killer in Arizona. I was in Zona, looking for some killer cereals. Don't ask. I needed fiber.
You see how the internet plays with people's perceptions of us?
Case in point, the hooker...I didn't kill her. I just found her encased in gold spray on my bed. It was really weird and it reminded me of this film I saw once, which I searched for as well, but couldn't find.

blonde menace: yeah, I may be around thursday, not sure yet, but holla at me if you're there.

rain: she may have added 30 years to your life, but if the extra time isn't enjoyable, then what's the point?

barney boy: thanks. if enough people think I'm funny maybe I'll get free beers out of this blog someday.

twoste: no worries. my regular readers are entitled to one free dead hooker, but if dead hookers keep mysteriously showing up in your trunk, I may have to narc. jus' sayin'.

Your post made me go back and look up a post I put on crazy searches that found me. The key words:

'Someone found my blog by doing a Google search on:
"space planes" "hydrogen bombs" "parking lots"'

So how does a ninja get his protein to stay big and strong? I am amazed at the neatness of your rows of beer, but want to make sure you're getting proper nutrition! :-)

Good luck with that SiteMeter monkey. I check mine at least twice a day. It's a sickness.

I need to have you over for dinner. Your fridge ain't right. I feed you beans and brown rice. Maybe a nice salad on the side with edible flowers from the garden.

My bf keeps EVERTHING in the fridge. Like if it's cold, it will last that much longer. This is true with many things, but not everything. Someday I will just turn the fridge off! ha

Goodluck with getting the computer fixed. That STINKS!

Hilarious stuff, HIN. I found that I had to get off the sitemetercrack. It was all consuming and left me with the worst hangovers.

I have sitemeter but can't bear to look at it. I looked at it once, that was it. You're a brave man, but then of course, you're a ninja. Duh.

I like the way everything in your fridge is lined up neatly.

bb: I think everyone gets weird searches. Searching for dead hookers freaked me out though.

stef: you'll laugh, but I have lots of tuna fish in cans (for the mayo) and lots of frozen skinless chicken breasts in the freezer (like more than 10 family packs).

mari: that sounds good, but just because i'm latin doesn't mean that I'm always hungry for rice and beans ;)

sharkbait: i'm no scientist I have no idea what doesn't keep better cold. But I figure, why take a chance?

shelli: yeah, I don't know if I can get rid of it now that I have it, but I'm gonna try to ween myself off it.

reya: how do you not get addicted? That's like saying "I only do heroin on the weekends".

I have to delurk to ask: do you eat solid food?

You've semi-answered that in previous comments, but still...

pds, what is OCD?

lily: I only eat in on weekends, which is why I don't need food in the fridge...only beer. I eat out or get take out during the week (everyday), and yes, it's solid.

anon: OCD = Obsessive Compulsive Disorder. I think I'm too disorganized to have it.

What you're latin? Okay, change in menu. Trout with a green onion sauce over a bed of brown rice (sorry rice is a constant) and a side of salad. That or fried tofu. mmmmm toe-foo.

Interesting article as for me. I'd like to read more about this theme. Thnx for posting that material.
Sexy Lady
UK escort