First of all, don't ask me why the pics are sideways. I tried to rotate them on Photobucket, but it wasn't working, so if it bothers you, just turn your head sidways, or lay your monitor on it's side for the remainder of this post. 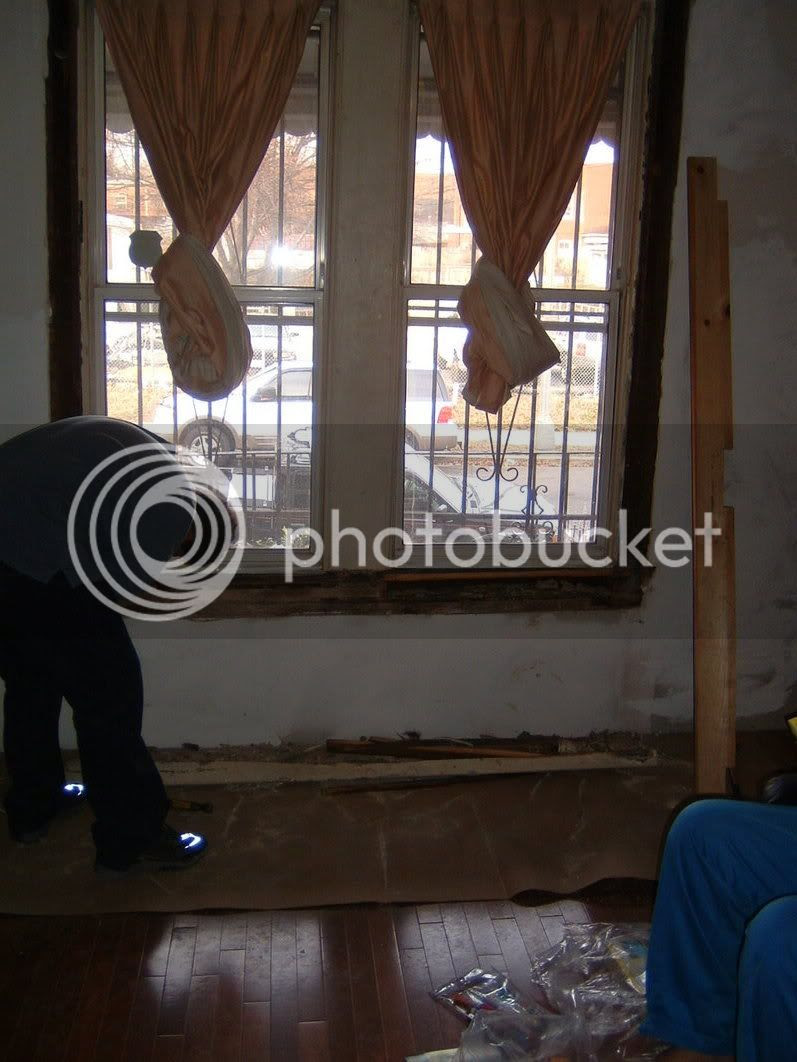 Okay, well I wasn't kidding when I said that a lot of progress was made over the past few days. Originally, this wall (plaster and wood lath) was taken out because it had no insulation (they didn't believe in such luxuries as insulation in 1910) and replaced wih sheetrock over actual pink insulation (or maybe it was yellow?). At first I tried to save the original molding around the window, but took it out when I realized that 1) the ledge wasn't level, and 2) the molding wasn't in great shape anyway. So ripped it out and we were left staring at this. 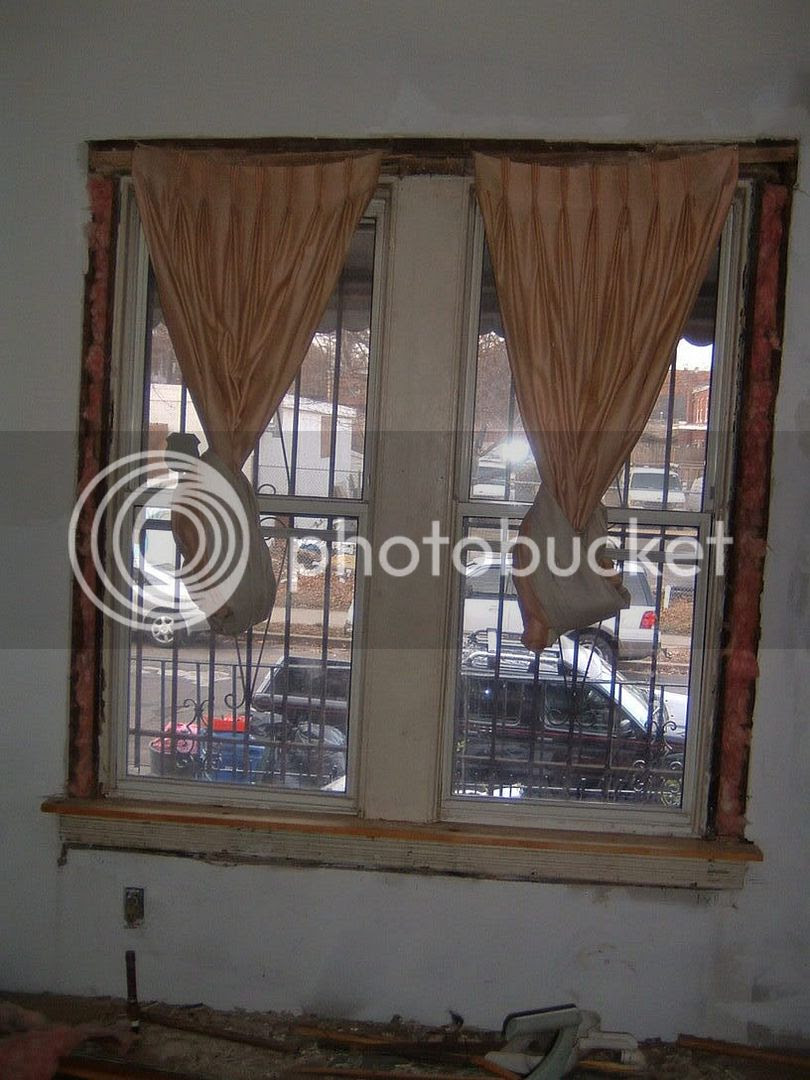 So we filled in the holes where the sash/counterweight used to be and installed the bottom ledge level. The molding around the window interior wasn't level either (it was about an inch higher on the right side), but instead of removing the whole molding, my brother had the idea of trimming it with a chisel down to size, which worked out fine.

We used 1x6s for the ledge and the side pieces. We reused the original piece under the ledge. The side pieces we trimmed to 4.5" so that they would be even with the replacement rosettes that we placed in the corners of the molding. It looks like the original trim, except that the original had fluting on the side. I could probably fix that with a router, but that is so low on my to-do list that it will probably never happen. 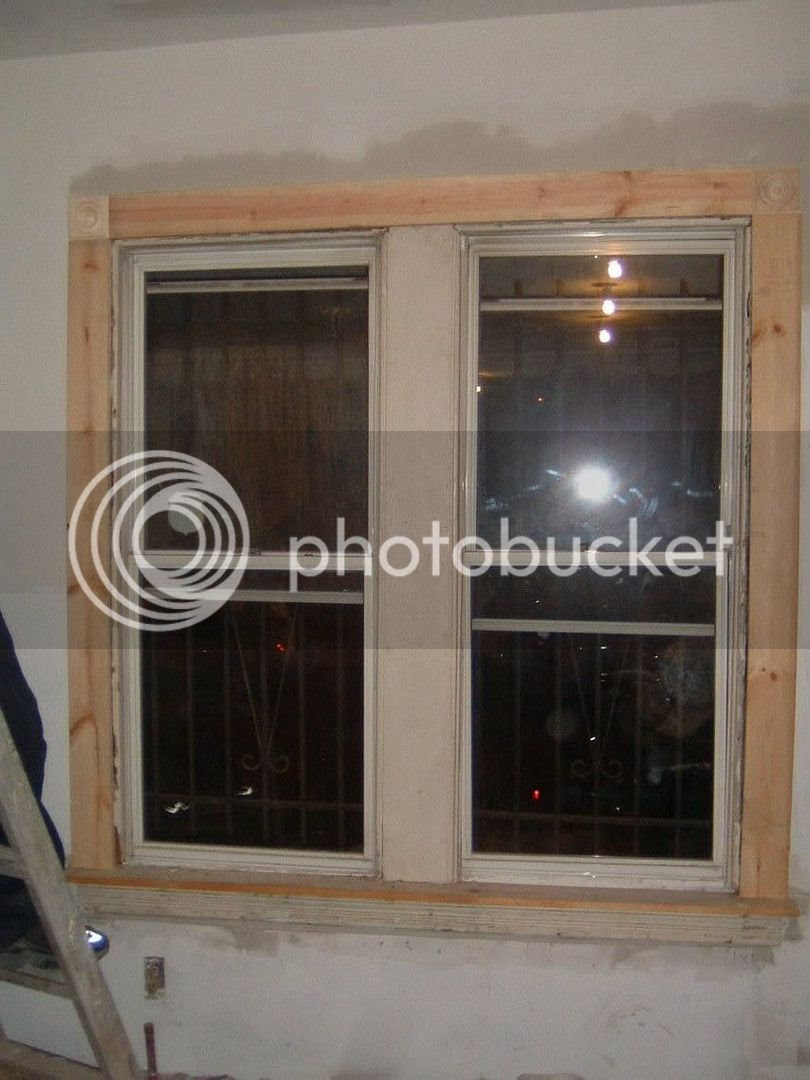 Okay, here is the finished product. Oh yeah, I forgot to mention that my dad fixed the areas around the trim with plaster. With 20/20 hindsight I would've done a few things differently (like buy a different house, or fire the original contractor after the first week). First, I would've added the fluting to the sides of the trim pieces and maybe rounded the corners on the ledge. Second (or third) I would've cut the side pieces a little smaller than 4.5" so that I could add another decorative trim molding to the side, which overhangs by 1/4" inch. But all in all, I am happy with the result. I am even feeling a little guilty that I called my brother fat. But since I was raised Catholic, even if I didn't call him fat, I would probably feel guilty about something else (Catholics don't need a reason to feel guilty).
Posted by HomeImprovementNinja at 7:09 PM

"With 20/20 hindsight I would've done a few things differently (like buy a different house...) Lol, 'been there, thought that' with our own place:) The trim looks great - good job, guys! And yay for insulation! You did get a lot accomplished!

Home Improvement hub is more useful to how to shade ur windows and how sunshine is improve ur home, hear is wht ur give images are fine.