Okay then. A few people have asked me what happened o'er the weekend. So to catchup:

When we last left our protagonist, he was planning on making repairs to the ninja fortress for the upcoming visit of Big Bad Ninja Daddy and Evil Ninja Twin Brother (and their respective entourages).

Okay, so progress didn't go like I planned. But some positive results were achieved.

*not his real name

**actually, T-bone is a trial lawyer, which is more exciting than being a transactional lawyer, like me (lets' face it, there are no TV shows about lawyers editing the forum selection clauses in a widget contract). You might think that reviewing documents is not very macho, and in actuality , it's not...unless you are a ninja!

Here are some flooring pictures: Okay, in this first one here, this is one of those before shots. the wall you see was knocked out to open up the space and the ugly "disco lives forever" tile was torn up. This not done by my mad powerful chi energy, but rather by the contractors I fired. They were surpisingly good at breaking things; but at putting them back together...not so much. 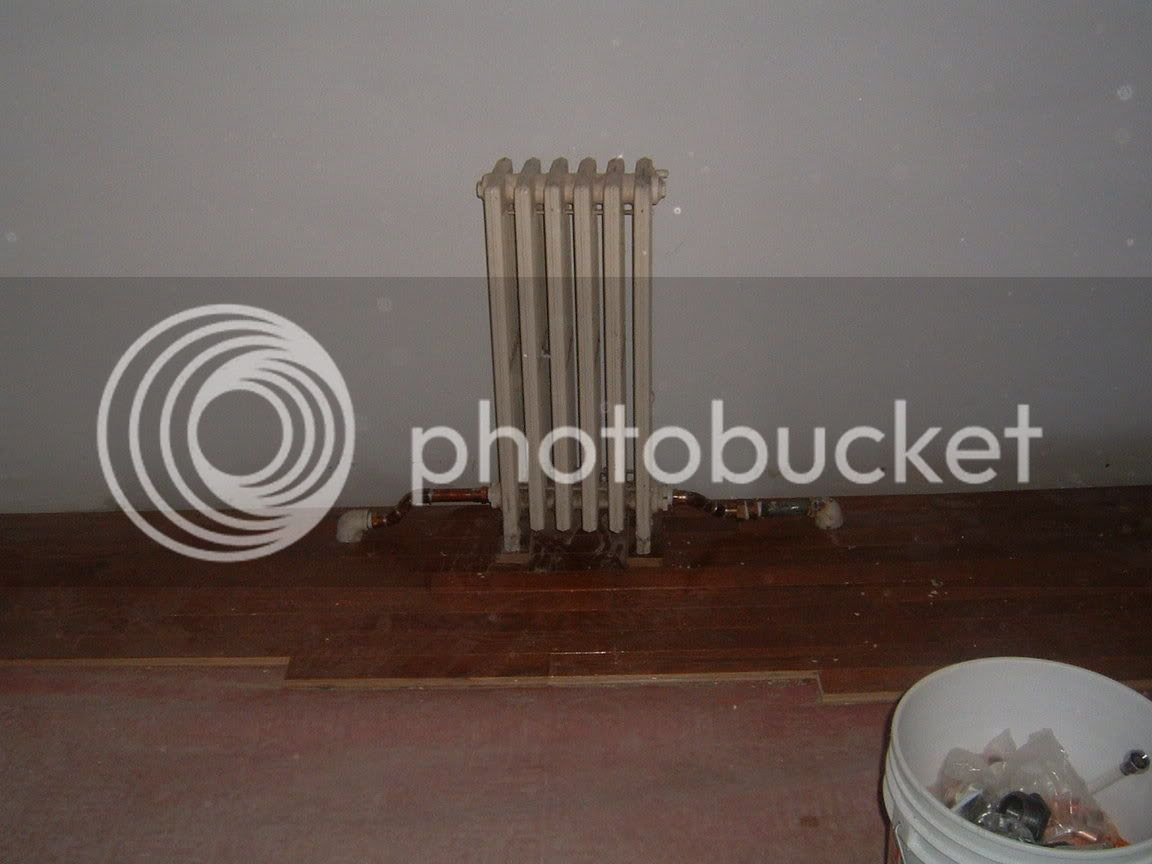 At first I just tried to lay some wood down, like this. But there was a slight dip in the floor. Possibly this was from the weight of the tile, but more likely it was from being walked on for 40 years by people with bad taste. Even though others claimed the dip was unnoticeable, it drove me mad, so like Edgar Allen Poe in the Tell Tale Heart, I ripped up the floorboards and laid a few roofing shingles beneath to even out the dip (this was harder than it looked, but not an amusing anecdote, so it will be skipped. For the morbidly curious, I will describe it in the limited edition HomeImprovementNinja DVD. It will be in the "special features" section titled "deleted scenes" I'll probably put it between the movie trailers and the director's commentary by me and academy award winning actor, F.Murray Abraham). 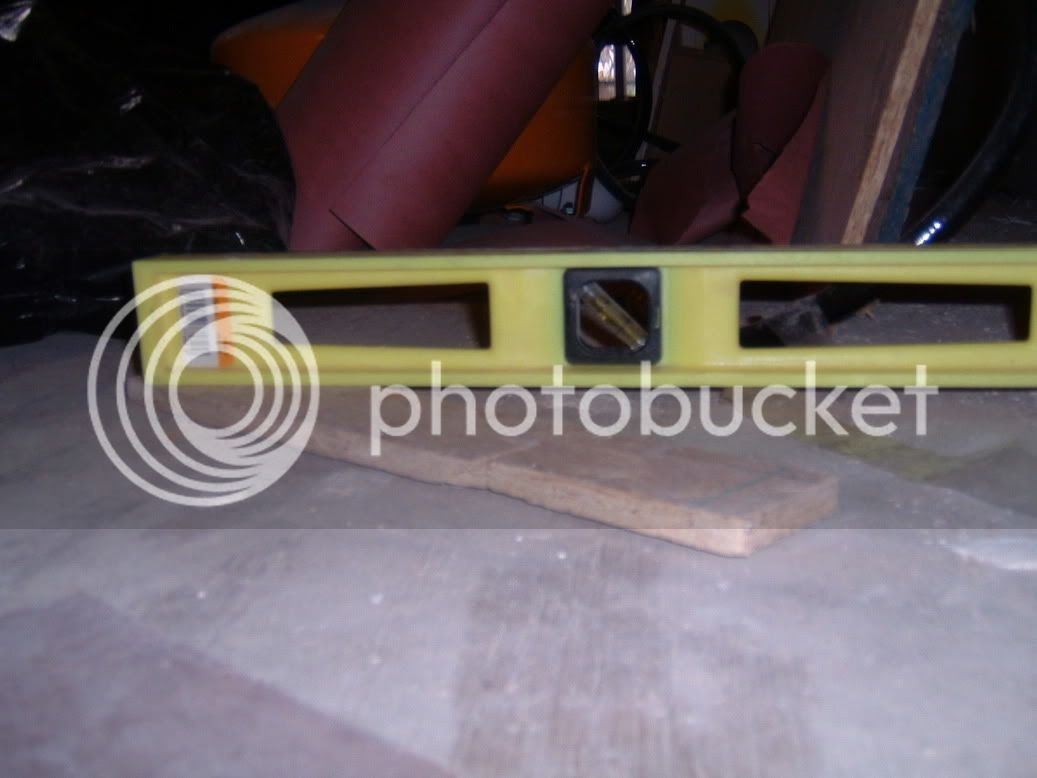 Here is a picture showing how partially outta wack my floor was. As I said, the dip was noticeable to me. I dunno if the people who said they didn't notice the dip were just tryin' to be nice or maybe some of them had some kind of inner ear infection which was affecting their balance or something....ummm, yeah, there's a lot of that going around this winter. 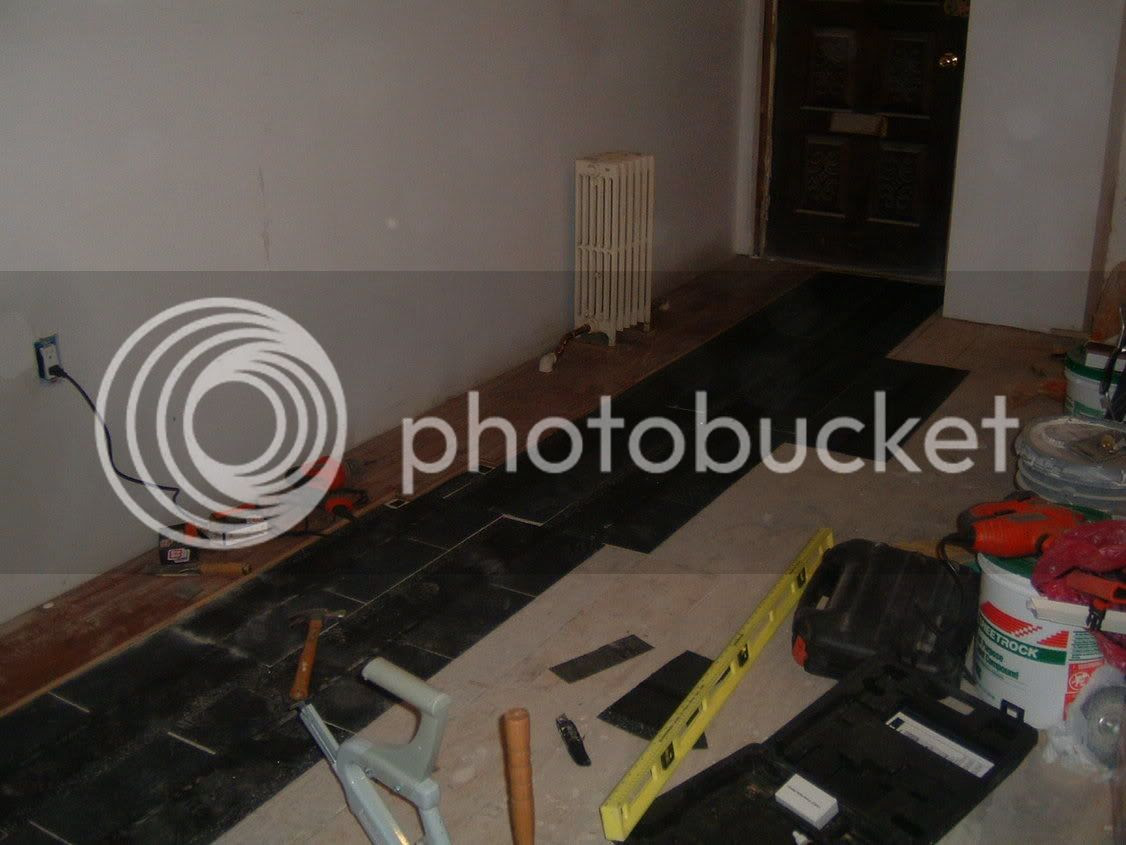 Okay here is what it looked like after I went medievel on it. I tore up a few rows of the stuff and layed down some roofing shingles under the floor to level it out. This sounds like some kind of crackhead quickfix, but two websites and a guy I know who does flooring confirmed that this is the proper way to fix a minor dip in the floor (although they could be on crack for all I know). 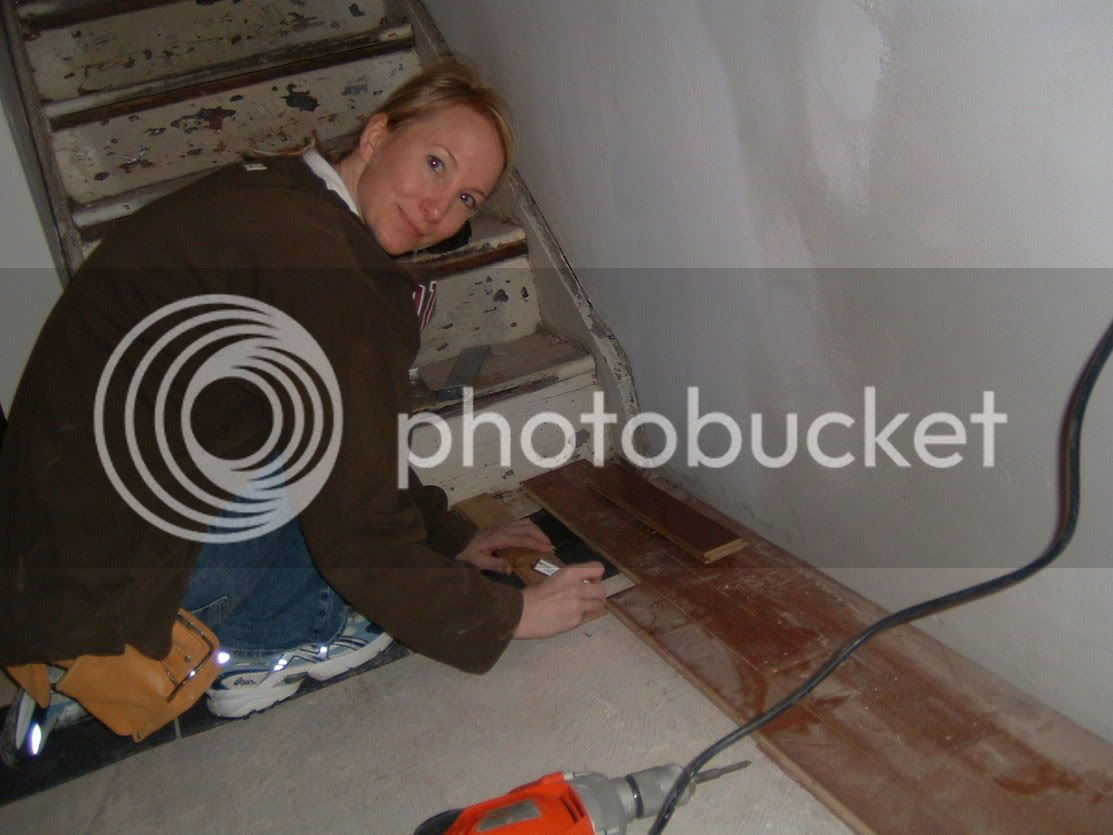 and here is a pic of the Toolbelt Diva measuring some hardwood so that she can practice her newly-acquired skillz on the compound mitre saw.

[EDIT: OKAY HERE ARE THE FINAL PICS I PROMISED THE OTHER DAY] 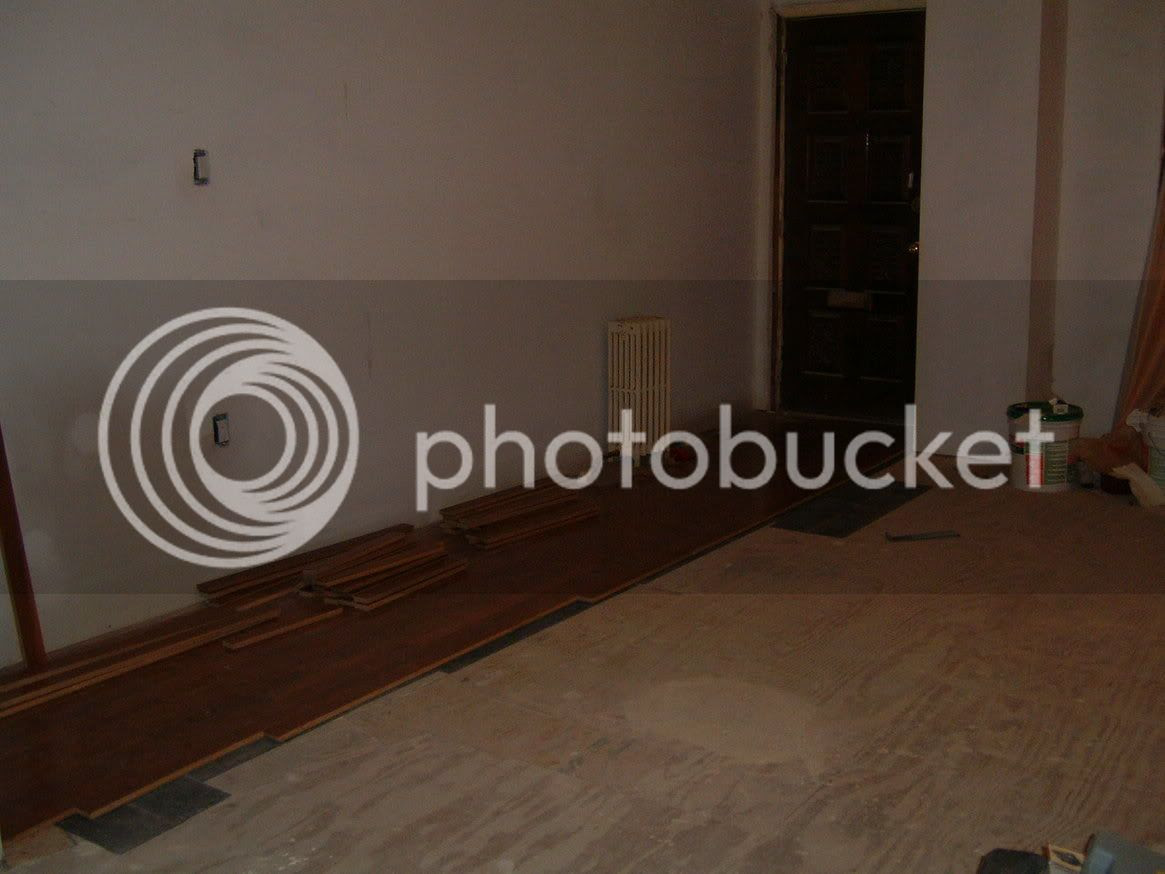 Okay, so here is how it looks so far. The dip is leveled out and there is flooring where the tile used to be, up to the point of where the wall used to be (luckily it wasn't a load-bearing wall...and no I didn't consult an architect before I had them rip it out. I just looked at the two floors below and the house next door to guestimate that it wasn't load-bearing. Then I had them rip out the wall (while I was at work) and when I noticed that they were still alive and unsquashed, it confirmed my hypothesis). This leads us to today's safety tip: If you are worried that something might injure or kill you, pay someone else to do it. 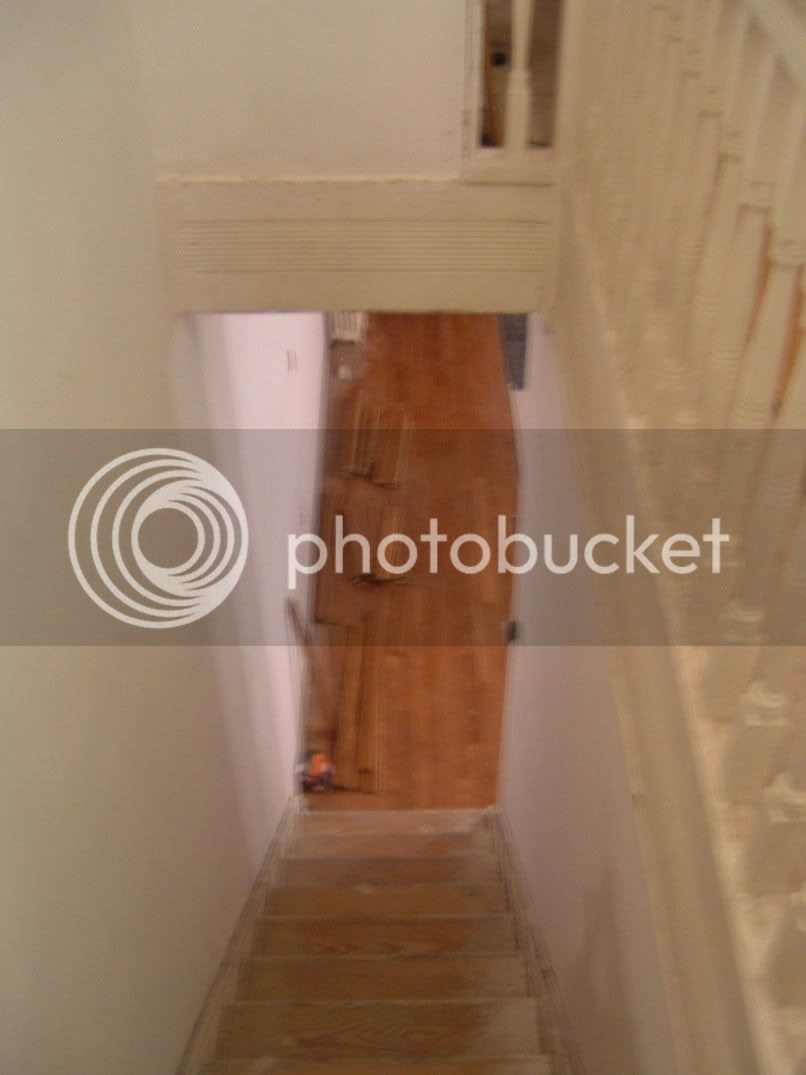 Check this out: If you look from upstairs, you can pretend that the whole floor downstairs is done. (sweeeeeet!) It's not as much fun as pretending you are batman (or a ninja) but it's a fun pretend game, nonetheless.

Posted by HomeImprovementNinja at 2:59 PM