Manual Labor: Harder than it looks

Now, I mentioned before that I have a manual flooring nailer. I thought about a pneumatic (air compressor) one, but I bought a manual one for several reasons.

After installing some floors, your lower back hurts from being hunched over; you wrist hurts from from the impact (you have to hit each nail hard at least 2 or 3 times to get it to go in right) and you get callouses on you hand. Okay, okay, callouses on my hand and my wrist hurts, please spare me the comments on excessive onanism. 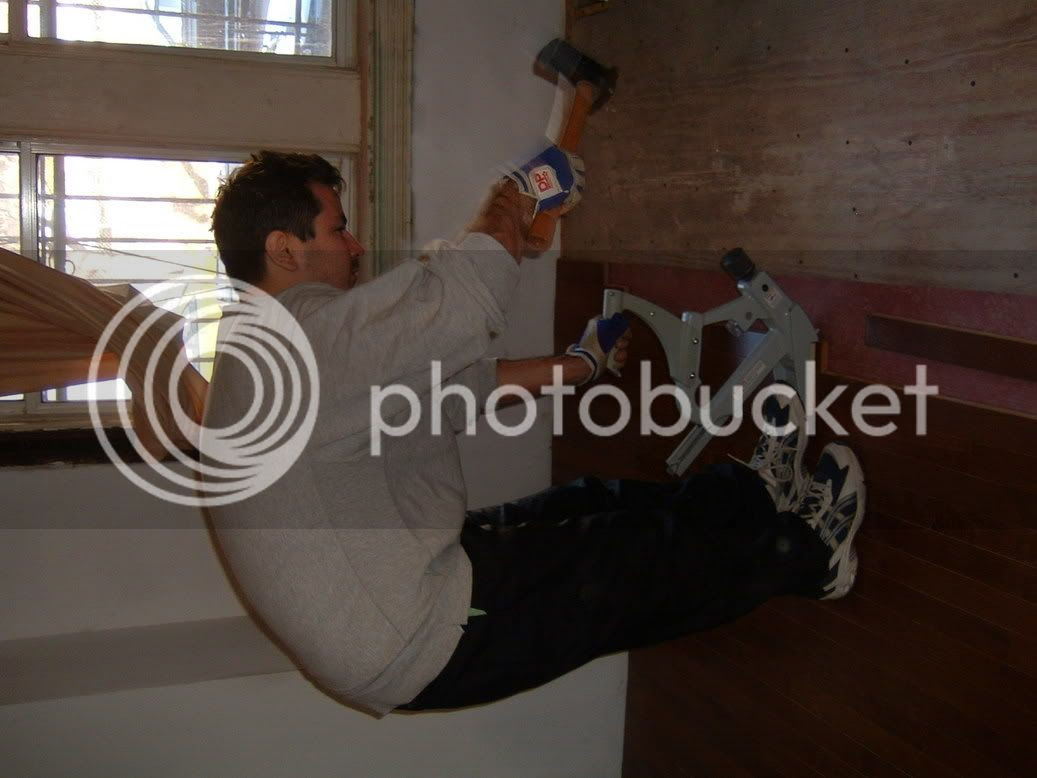 This is a pic of me with the flooring nailer. My back hurts just from looking at it.


The worst part is that I did end up buying a compressor (it came with a finish and brad nailer) and I found a place http://www.harborfreight.com that sells a air-powered flooring nailer (new) for the same price I bought a used manual one . Arrrrrrrghhh! I wish I had known about that place before. So I am thinking of getting another one, but I only have about 1/2 the floor in the living/dining room area left, so I don't know if it's worth the trip (they don't have stores in DC) just to get it when I need to finish the floor now.

So my aching back, arms and bruised ego caused me to have an epiphany: manual labor is harder than it looks. It's good that I work in a nice air-conditioned office and the only danger I face is carpal-tunnel syndrome or acute boredom (very common among derivatives lawyers).

It's difficult when I have to do heavy work for a few hours on the weekend, I don't wanna think about how my candyass would make a living if I had to exert myself strenuously for 8-12 hours a day. I would probably have to turn to a life of crime, or become an auto mechanic, which is basically the same thing except you get a little dirtier overcharging someone to replace a timing belt than you do breaking into houses and stealing VCRs. Moving on...

Toolbelt Diva missed the mark when she tried the flooring nailer and hit her foot with the big-ass mallet so she doesn't want anything to do with that machine again. But she works in a nice air-conditioned office too, so she doesn't need to bother with that. She got a nice bruise on her shin from it. Now if someone asks her what she got for christmass, she can show them a big blue welt on her shin. I think if I got a air-powered one she would be good at it, but that won't happen 'till my next house.

Posted by HomeImprovementNinja at 3:39 PM

Wow! I'm very impressed with your nailing technique after looking at the photo of you driving the nails with that flooring nailer. Who would have thought that you could lay hardwood walls. One question: do you put something on the bottom of your shoes to stick yourself to the wall like that or you just hanging from the nailer itself? ;-)

Two things:
1) Wall-to-wall hardwood is just for people cutting corners. You gotta go all out and do wall-to-ceiling hardwood. It's the only way to go.

2)Those are ninja boots. I use them to lay hardwood and scale mountain fortresses to slay recalcitrant feudal lords.