Well, I didn't mention it before, but my foster dog got adopted. I miss the goofy mutt, but in a way it was good to have my life back. Plus, the guy who adopted him lives next to a dog park (which is great for the dog) and he's going out of town a few times this summer and asked if I could dog sit. Which is awesome for me. That's like breaking up with an ex and having her get married, then having the husband ask if you could sleep with his wife while he's out of town, then drop her off when your done. Well...it's not exactly like that, but it's still pretty freaking cool.

In the meantime, to get my dog fix, I have been taking care of a new dog for a few days while the real foster dog person lady is out of town. 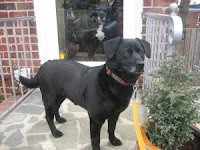 "Hi, I'm Beatrice. I'm not as cool as Ninja's previous dog because I have short stubby legs and am afraid of everything. You'll know when I'm afraid of something like a loud noise, because I will cower in a corner and pee on your hardwood floors. Plus, I'm a little chunky so I'm hoping that Ninja will take me on his training regimen which involves running a half mile in the morning and bragging about it the rest of the day. He says he runs two miles on the treadmill at Gold's Gym, but if that were really true, than I wouldn't be the only chunky one in the house. Plus, he made me watch The Dog Whisperer with him and started telling me about how he's the pack leader. What-the-fcuk-ever!!!"

Yeah, so I think this dog was abused before because she's really jumpy and got terrified when I picked up the broom to start sweeping. So I stopped sweeping. It's not like a need an excuse to avoid working, so when a legitimate one comes up, why not take advantage of it?

Another weird thing about this dog is that it's a girl dog. I didn't think about this until yesterday, but all my dogs have been boy dogs. So when I gave her a belly rub yesterday, I noticed something was missing....the penis! I don't think there's a big difference between boy dogs and girl dogs (except for the whole penis thing), but one thing I noticed is that girl dogs pee funny. Boy dogs lift their legs like they're about to execute a roundhouse kick; girl dog's just sort of squat like they are about to jump through a hoop. Boy dogs also like to mark their territory...a lot. If I take a boy dog out for an hour long walk. He will be peeing on stuff for the full hour. And even if he runs out of pee (which almost never happens), he still lifts his leg and tries to mark his territory. It's like he's marking it with his chi. A girl dog only goes a couple of places and uses the peeing process to empty her bladder, not make some kind of statement about it's role in the heirarchy of dog society.

Anyway, that's all for now. Which would you prefer, a girl dog or boy dog?
Posted by HomeImprovementNinja at 2:06 PM

Cute dog! Why didn't you keep the first one?

Marathon marking or no, I prefer boy dogs. Girl dogs kind of gross me out. Don't know why. No good reason. Just don't like 'em.

I have gender confused dogs...

My male dog squats to pee and pees exactly once on a walk.. for a full SIXTY SECONDS. Huge bladder that one. He tried to lift his leg once as a puppy and fell over.

My female hikes her leg up as far as any male I've ever seen (except my wimply one described above)... and pees at LEAST 3 times (or as often as she is allowed) on a walk. She particularly likes to mark street posts and tall clumps of grass. It's REALLY funny to watch as she artfully hovers vertically near her target...


I prefer male dogs because they are more affectionate in general... females are much more standoffish and bossy. No translation to humans needs to be inferred.

girl dogs are the bestest! although my girl has a little bit of boy in her b/c she marks often on the first leg of our walks. especially if she's just seen another dog in that area. she has also been known to hike up her leg. i've heard a few times, 'i thought she was a girl?' she IS a girl. she's just tough. i think girl dogs are more mild mannered than male dogs, but every dog i've ever had since i was a kid has been female so i'm biased.

I've had both, and it depends more on the dog than the gender.

In law school, I had a dog that had been abused, and she was scared of everything too -- but especially being alone. So whenever we left her for more than 5 minutes, she would tear something up. She dug a hole in my bathroom linoleum. Seriously.

I think the moral of the story is be wary of a nervous dog. It's bad for your house.

anon: he needed more time and energy so he was better off with someone else.

The Maiden Metallurgist: Yeah, I think boy dogs are cooler.

Jennifer: you have WEIRD dogs.

dara: NOW you tell me?

You wouldn't have any of these issues with a cat. For one thing, you can't even tell if it's a boy cat or a girl cat because they have notoriously inconspicuous penises. Or, in some cases, no penises at all.

Speaking of which, have you noticed that all boy dogs have the same size penises?

We had the coolest boy dog ever, followed by the coolest girl dog ever ever, so I wouldn't say I had a preference. Glad you're taking care of her!

I would prefer one of each - two german shepherds, one solid black, one black and tan.

I feel like Im typing at a drive thru window lol

What a humanitarian (or is it dog-itarian?)!

Or do you just rescue dogs to impress the ladies?

I have two dogs at the moment, both males. They both squat to pee. Freaks.

I've had both female and male dogs, and generally prefer the males but generally advise friends (and strangers) against un-neutered males for a variety of reasons: health, behavior, dominance, etc.

I do beg to differ with zoom's comment that all boy dogs have the same size penises, though. They don't, as is clearly evidenced by my dogs. If I were a perv, I'd provide photographic evidence, but that's sort of nasty so I will refrain.

Glad to hear that Ex Dog has a great new home though! I know you miss him, but I also know that you're happy that he's still available for booty calls ;)

We prefer the girl doggies (have 3)... but I'm not sure why. The boy dogs love them... they are big flirts... not so different from us, I guess! Hannah has a gender-identity crisis when it comes to pee-ing. She lifts her leg and marks all walk long. And sometimes she actually hovers to position her "mark" just right... They are all big lovers. I guess I like the fact that I can belly rub without an obstacle.