You Be the Judge

A few months ago I spotted what may or may not be George Clinton in my hood. I walked in front of him to make sure, then I snapped this pic with my old camera phone. I didn't speak to him because, well, because he's George Effing Clinton and you just don't go up to him unless you've got something to say (or some free pot). And I was coming home from work (wearing a tie!) and I didn't want him to think I was a narc. Although my friend's band opened for him and P-Funk several times, I don't know him personally and I didn't have any free pot for him, so I settled for taking this secretive picture from behind rather than approach him from the front and start talking to him like kind of yuppie with a freaky man crush.

I was telling a friend the George Clinton story last week and showed the picture to prove it, but (maybe because of the small screen on my phone), my friend doubted it was the man from the mothership and instead insisted that I had snapped a picture of a really weird homeless guy. So I'll leave it to you imaginary people to decide: 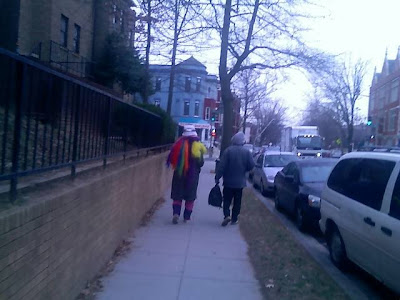 Posted by HomeImprovementNinja at 4:17 PM

PFunk makes me think about my high school hockey team. They would play PFunk in the locker room. I know this because I was peeking in.

Pretty sure that's one of the more colorful (and fragrant) Central Park West homeless dudes, on vacation in DC. Seriously--I've seen that exact getup before.

George Clinton played the 9:30 club in DC in February. Do you remember when this was taken>

Dude, this photo is about as convincing as the one with the comb-over man in the convertible. If you're going to make a habit out of publishing secret photos of random people on the street, then at least invest in a decent camera.

Maybe it's a homeless dude. I can see where it'd be hard to tell the difference.

Duh, everyone knows George Clinton and Homeless Guy are one of the same.

Did that person smell worse than a homeless person? If so...then it definitely was George. I love me some Pfunk...but George smells like the dumps out on Staten Island.