There are very few things that leave me speechless. I'm a lawyer, so words are the tools of my trade. Like a carpenter's hammer, a surgeon's scalpel or a trophy wife's breast implants, words are what I use to earn money to keep a roof over my head. So it's not often that I forget how to use them.

However, yesterday I was driving to my meditation class and I saw the funniest thing i've seen since Superbad. I whipped out my cell phone, snapped a picture of it and emailed it to my friend with the only words I could think of to mock it: "HAHAHAHAHAAHA!

When I first bought a phone with a camera, I hoped that one day I would find a use for it, but it stayed in my pocket eager but without a purpose, like the condom in a high-school kid's wallet. "Someday" I kept thinking..."someday." Well, yesterday was like the prom for me. I almost crashed my Ninja Lite Armoured Assault Vehicle at the site of THIS: 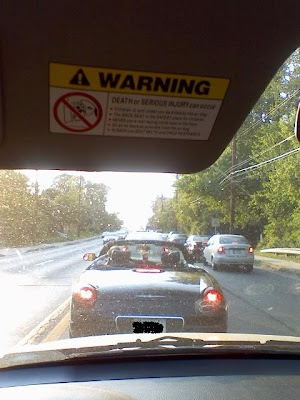 A guy in his early/mid 50s, bald, with a reallllly bad comb over, driving a T-bird convertible. As he drove the comb-over would flap wildly in the wind, then at every red light he would stop and fix it back in place. As if all it needed to stay in place and look like a normal head of hair was to be patted down one last time.

With his Ray Bans on and his convertible he was making eye contact with the 20-something cute girl in the next car. (why aren't men in their 50s attracted to women their own age?) In his mind I'm sure he felt like he was Tom Cruise in Risky Business. But the girl was kinded of creeped out by someone her dad's age looking at her sexually; and I had this reaction: HAHAHAHAHAhAHA!!!

I drove up next to him and thought of rolling down the window and saying something, but all I could think of was: HAHAHAHAHAAA!!!

It's been 24 hours now, and I finally know what I should've said to the guy:

Posted by HomeImprovementNinja at 3:17 PM

Funny. But so so wrong!

Oh, poor guy. I always feel bad for men like that.

The only thing that might've made it a better scene would've been if the car had been a Miata. Then it would've crossed the line from 'sad' to 'fantastically sad'.

A Miata would have transformed this from "ROTFLMAO" to "ROTFLMAO - OMG I think I busted a gut laughing...."

A Miata would have floated off into the air, using the dude's combover as a sail.

You laugh now. But one day, you will likely be married, childed, balding, and in a midlife crisis. Please, though, don't buy a Thunderbird. Make it German or Italian.

I swear it will never happen to me, though.

You can call me, 'Sir: if he had a miata, he should be shot.

Jamie: yeah, let's not jinx anyone.

For some strange reason that might not make any rational sense, your sun visor bugs me.

I love to hate Miatas, it gives me joy.

Arjewtino, I bet you're freaked by the rather morbid stick figure carseat baby getting crushed by the deploying airbag.

I while ago, I looked my window to see a man in a similar mid life crisis car, smiling creepily at me. Sensibly he was wearing a cap, to hide his balding head, but it was pretty windy, and after a moment it blew off - at which point I realised that the hat had a ribbon tied at the back, connected to the tag of his jacket, so he wouldn't lose it!
It still makes me laugh!
and... thinking of his face... when he realised I was staring & laughing! oh! I'm laughing too hard...

I observed a guy in Chipolte the other night with a bad combover and a mullet to top it off...........really bad and I was laughing way too hard.

My dad has a miata. I really hope he doesn't go around trying to pick up girls my age or younger...

When I see "the comb over" I just want to yell "get some balls". It looks sad, it looks pathetic, it fools no one. Embrace the balding-ness, that's 500 times sexier.

i heart your use of analogies.

Anonymous: sadly, it's not uncommon to see this.

Capitol Hill 20210: i don't know which is worse. Mullets are also never right.