A nice article about the opening of Target tomorrow in my ghetto...errr, neighborhood. On saturday, I was interviewed by Channel 9 news about the development by the metro, and I was on TV at 6 and 11. I told a few people I know about it, but I didn't tape it with my old school TiVo (i.e. my VCR) because, honestly, I only have a couple of VCR tapes (I'm not a caveman, afterall), and I didn't want to tape over the UFC fights that I hadn't watched yet.

It was a weird experience. I was out walking the world's coolest dog and listening to my iPod when this heavy set guy with a giant smile comes up and starts asking me questions about the Target store. The first thing I thought was "I'm not gay, and even if I was, I am SO out of your league that it's not even funny, slim." After a couple of questions, he said "can you say the same thing on camera?" and motioned for the camera guy to come over. Then he asked me the same questions, and I gave the same responses, word for word, while my dog sniffed the camera guy's leg and crotch area.

After the question and answer session, they petted my dog (everyone pets my dog because he's so cool) and I went on about my business. Being on TV doesn't phase me in the least. I'll just add it to my screen credits: I was also on Jim Cramer's Mad Money last year, but I didn't bother to tape that either. And I was an extra on a Chris Rock Movie, Head of State (the worst job I've EVER had) and was inadvertently in Sabrina the Teenage Witch Goes to Rome (long story).


And because I never get tired of posting pics of Benny, here he is again. 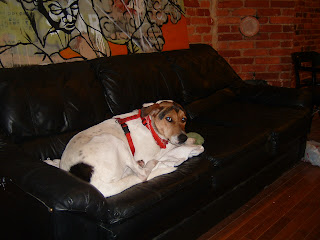 You can call me "McLovin".
Posted by HomeImprovementNinja at 3:15 PM

Benny is a cutie and so jealous you were in a Sabrina movie :-)

He's a really cute dog. What breed is that?

AHA! Benny is now being called "my dog" on a regular basis!

Keep Benny--he is a chick magnet. Maybe carry a baby at the same time.

I like your blog, just surfing through. Dogs are the best, Target is a close second. Sabrina the Teenage Witch? What a strange life you lead...

Anonymous: No one knows. We think part greyhound, part beagle and part asshole.

kingstreetfarm: yeah, me too, but he deserves a place in the country, with other dogs.

lemmonex: Carrying a baby and benny at the same time would be so powerful, that it would like a black hole of chick magnetism. The attraction would be so strong, that no xx chromosome could escape.

Moxie: Thanks. Strange in a good or bad way?

so is the sabrina actress hot?
-Twoste

That's a pretty cool experience, though! Just to have something random like that happen. Knowing me, I would've said, "Mmmmm...NO THANKS!"

Aw, your mclovin is so much cuter! Part Jack Russell? (PS I am a smart blogger linking to you.)