In a change of pace, I'm going to post some pics of actual work that I've done recently. I get tired just thinking about it.

Part of the reason that I'd run over the contractor I fired if I ever saw him crossing the street is that I had to undo so much of what he did and re-do it myself. So I got to do the work myself, but still ended up paying a lot of money for it. It's feels like being asked to dig your own grave. The end result is you get screwed. Why did I pay this moron if I was going to re-do it myself? Anyway, enough complaints. If you wanna hear people complain about their problems and do nothing about it, you can buy the Sex and The City DVD Box Set.

I've alluded to a structural problem I need to address before installing the cabinets. I could just leave it the way it is and hoped that no one notices, but Catholic guilt prevents me from not doing the right thing.

The window in the kitchen was crooked and I thought it might be a symptom of a larger problem, like when your car's check engine light comes on and you take it to a mechanic and find out that Paris Hilton has a drug problem. 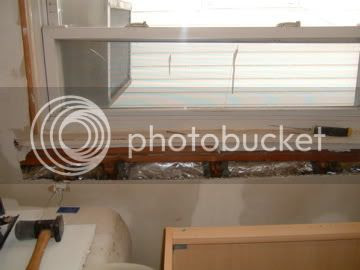 I did some exploratory surgery and took a look at why the window was was crooked and I noticed that the bottom was pushing up on the window. 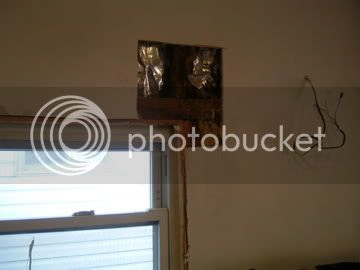 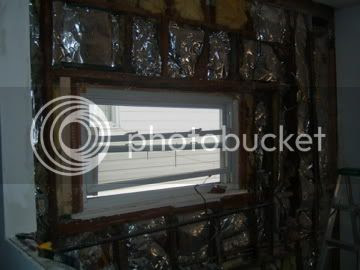 Then I stripped the drywall off the old wall. 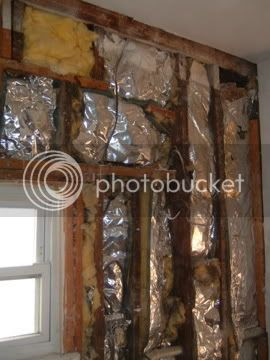 
This is like some feng shui nightmare. The flow of chi energy is blocked by these right angles.

Since the header wasn't distributing the energy, the window was getting warped and would probably get worse over time until the house collapsed, killing the yuppie family that I would eventually sell this place too for way too much money.

So I didn't want to take the old supports out and put them back the right way (because that would involve jacking up the whole room, so I decided to build a new wall in front of it, to take the weight (like when you put your car up on jackstands). 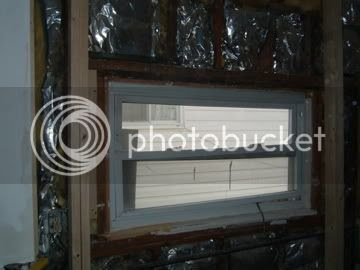 First I started to make some supports in front of the old wall. After putting the top plate and sill plate in, I made the support beams taller than would fit by about 1/2", then I hammered them into place with a sledgehammer so that the new 2x4s would take the weight of the house off the old supports.

Then I added a header. 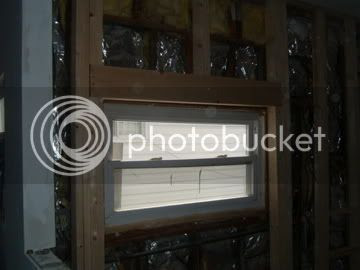 This is what the finished product with the (correct) header looks like. 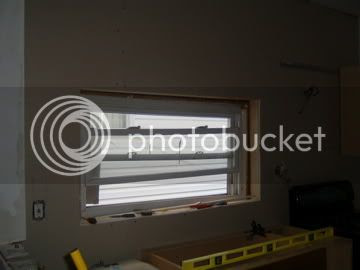 Then we covered it in drywall. 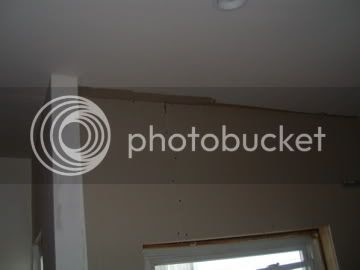 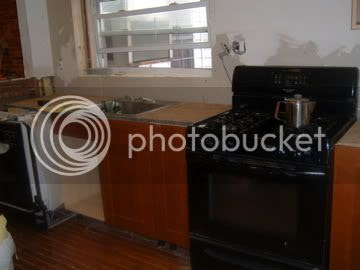 Then we installed the cabinets and stove. It still needs a proper countertop, but you get the idea.
Posted by HomeImprovementNinja at 4:03 PM

Bless you for doing the right thing, Ninja. You should sleep well now.

Even to my untrained, non-home improvement eye, that is some crazy sh#t. It *was* a feng shui nightmare! Great work there, HIN!

I am in awe. How much to help me fix the mystery leak in my roof?

OH! Like during the winter when you were on a date with that girl and got a flat and I had to come give you my jack from my mini-mobile, and you had to jack it up on bricks? Ha. I said "jack it up." But I digress...

The cabinets look great. Gee, I wonder who helped you bring those motherfuckers inside your Ninja Compound? Hmmm? Cause I know you didn't get those things in by yourself. Someone must have helped you. Right?

oh my god, I shudder to think of what's going on under these walls I'm surrounded by, right here. scary stuff. You made it look all straight and stuff. Kudos!

Wow. Seriously. Was that all in one day?

CPDay: thanks, but the Catholic guilt still give me insomnia.

Jamy: I take forever to fix stuff, so you wouldn't want me to do it.

Velvet: Yes, you and he who shall not be named helped me bring them in. Happy now :P

CondoBlogger: Yes, one day, but I had a couple of people helping.

wow! I can't believe you've done all this!

Holy cow! You definitely chose the right name for your blog.

Do you do bathroom remodels? I need help!

OH i LOVE that you went in and did it RIGHT!!!!
im OCD..so i never would have been able to live with it .."not done right"...right this min. im going a little schizo cause i think my shower door is kinda not on the track exactly right..
xoxo

DCWeddingPhotog: Thanks. I don't think anyone believes it. Hence, the photos.

Lisa: thanks. I was thinking of calling it "Lemongloria" but some chick snagged it first.

JoJo: I don't do work for others because I'm nowhere near done with mine yet.

Velvet: Is that all you think about? Not that there's something wrong with that, I'm just curious.

lol...thats right velvet..
DONT MAKE ME COME OVER THERE.. and do it properly..
xoxo