In ye olde days, people didn't use many electric outlets. Typewriters were not electric and most other chores that are now done by appliances (like washing clothes and microwaving food) were done by subservient wives. This is still the case in most red states, but I digress. If you have an old house, you'll probably want to add more electric outlets at some point (or marry a goodly woman with wide birthing hips who is content to spend all day scrubbing your wash by hand down at the local stream with the other Amish women).

So here's how you do it: 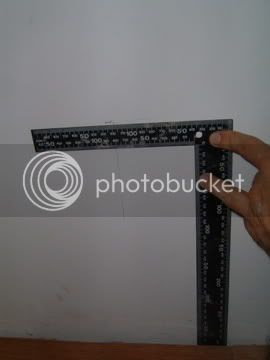 First, mark out where you want the new outlet to go. 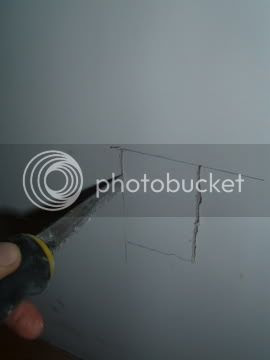 Then, make a hole in the wall with a keyhole saw. 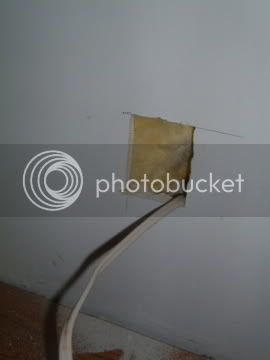 Then, pull the wire through the hole (yes, this assumes you've got a live wire in the wall. We'll go over running a line from an existing outlet some other time...if I feel like it). 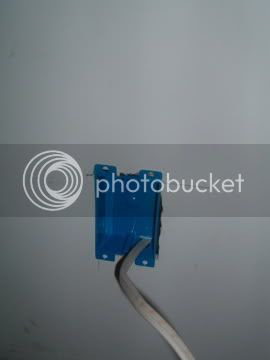 The put the outlet into place by feeding the wire through it. Make sure it's an Old Work Junction Box, so that it can be secured to the drywall from behind, without screws or nails.

1) A friend of mine was commenting recently on how big my place is and how I could rent out a couple of rooms if I wanted to (the basement, for instance, will have it's own bathroom, so I'd only ever need to see the person in the kitchen). Although my mortgage is more than I like, I still don't like the idea of living with someone, and whenever I feel like I'm warming to the idea, I read something like THIS, which brings me back to reality. A lot of people are assholes, and they have to live someplace, so if you rent a room to someone you might eventually end up with an asshole in your house. And although my place is big, it's not big enough for two assholes. Unlike Florida, which is Landlord friendly, DC is asshole friendly. No thanks.

2) It's 6pm on Saturday and I just woke up an hour ago. I feel like sh1t. Kill me now and get it over with. I was out too late last night and ended up making out with a woman who is very attractive and very married with a kid. As I was trying to wrap my head around that, my friend summed it up nicely: "You know...it's all fun and games until you have an angry husband shooting at you". Does this make me a home wrecker?

3) I don't plan on writing much for the next few weeks, for reasons I won't go into, but I have some half-finished posts about my trip to Ikea with a friend who showed me what her "bitch mode" looks like; a post from the legal chronicles about how I ended up not working for a dead guy who liked me; and a post about the green eyed monster called Carl (yes this will make sense in time).

4) I am thinking of adopting a dog. Although a cat would require less maintenance and would pull it's own weight by killing any mice that dared infiltrate the fortress, a cat would also be kinda gay. Not that there's anything wrong with gay people, but I don't think I could afford a whole new wardrobe right now (although apparently, I don't have to change my entire wardrobe). So if you were me, would you adopt a big dog or a small dog?

With a big dog, I could take it jogging (if I did jog, which I don't, but maybe I don't jog because I don't have a big dog), and it could guard the house when I'm out. But a smaller dog will probably make smaller poops for me to pick up and when I sell the place and look for a condo, there are more places that allow small dogs than big dogs. Also, if I need someone to dogsit, I'm sure that someone would more likely agree to dogsit for a dog who's owners give it names like "teacup" or "bijou" than if I had a dog who's owner's commonly name it things like "cujo" or "godzilla".
Posted by HomeImprovementNinja at 10:37 PM

1) Yikes! I'm thinking of renting my place when I move out, but that article scares me!!

2) Sorry to hear about your married make-out session! Angry husbands can't be fun.

3) I always know someone is truly my friend when they still love me after seeing my bitch mode. :)

4) Yeaa...a guy with a cat is kinda gay. But so is a guy with a small dog. How about medium sized?

ah..hin..
making out with "unavailable" folks never leads to good karma....
the greyhound rescue league has been after me for last few weeks..my only real hold out reason..is...poop size... so i relate...
maybe a nice MEDIUM sized dog... like ..like ANNIE... Sammy's girlfriend.. she is cute...not too small... not too big..and not gay...
xoxo

Bryant Gumble has a dog named Cujo. He was guest host with Kelly Ripa (on Live w/Regis & Kelly) and Kelly was talking about how intimidating it was to visit his apt. She already knew he had a dog named Cujo and when she & Marc arrived at the apt, there were many "Beware of Dog" signs around. Turns out Cujo is a tiny white "girly" dog and Bryant makes no excuses for the love he has for Cujo. I have a feeling you could also get away with a small dog, just tell people he's a ninja in disguise.

Please don't get a cat. Several housebloggers have had to replace sections of cat-piss damaged floors. Having a litter box in your house is a real turn-off, regardless of how often you clean it.

Please don't rent a room in your house. In big cities the law is always on the tenant's side. Another houseblogger, DanaBushman.com at Here is the House, bought a house in NYC and the PO did not get rid of the tenants before the closing. It took several years to get them all out. And the worst of the bunch didn't pay any rent and won in court, stayed for another year or more rent-free. The only successful landlords are those like Donald Trump who business in being a landlord.

I'm still waiting for the pic of you in your tux. You can blank out your face if you want your privacy.

I agree with everything Kathy said. And SB is right - medium sized dogs are good.

I say a small yappy dog. One that you won't hit when you pull the trigger on a shotgun!
You may fear the husband or the child but it is the woman that you need to be afraid of.... her alligator mouth will get your "baby doll" ass into trouble!

I agree with SB - bad karma. And a medium sized dog. Any dog can be a good guard dog by virtue of the fact that dogs bark and they might bite. If you get a big dog you're probably going to have to commit to exercising it more. So think about that.

my advice, unsolicited though it is:

1) never make out with someone who is VERY married. 'Barely married' is a better, but it's a relative 'better', as in 'hot coffee' v 'scalding hot coffee'. Either way, you can get burned.

3) A Schipperke is a great dog. Manly, yet small. A working dog from the river barges of Belgium. But, when you have to join the Merchant Marine to avoid the gunslinging angry husband of 'very married', you can take the dog with you.

Never own a dog you can't beat in a fair fight.

1) Once you get a dog (never a cat, please!), you will have a roommate.
2) Bad Ninja!
3) Ah, the bitch mode. Mine's quite lovely. Even my dog runs away.
4) See #1. Medium sized from shelter is best. It's like looking for a girlfriend/boyrfriend. You should shop before committing. Go to several shelters until you find "the one".

How can you say no to snoopy?

Aileen: thanks, but why is a small dog gay?

suicide_blond: Don't Greyhounds need open spaces? Poopsize aside, I dunno if that would work in a townhouse.


Kathy from NJ: thanks for the advice. I'll get the tux pix soon.


velvet: this has nothing to do with the fact that YOU have medium sized dogs, and therefore think they are the best?

Lisa: Yeah, I don't commit to my own exercise, I don't want to have to excercise for two.


Bill : That's a nice looking dog (according to google) but I'd want to rescue one from the pound and I don't think I can be that picky.

JoJo: thanks. Okay, so the consensus is medium or small dog.

1) An Italian Greyhound is a small to medium sized dog.
2) Some breeds have rescue organisations, (Greyhound Rescue) who try to "place" abandoned dogs. They will take them back, if it doesn't work out.
3) Bichon Frises are small, smart, friendly dogs who don't shed.
Atmikha

Don't get a cat. If a Lab is too big for your taste, find yourself a beagle. However, if you get a beagle and name it Snoopy, I'll find you and kick you in the head for your alarming lack of originality.

I'm willing to hurt you because I care.

Making out with MILFs can possibly lead to the sudden formation of bullet holes in your torso, so you probably want to steer clear. Besides, any married woman (or man, for that matter) willing to 'get a little on the side' is a serious issue factory who might end up being the one holding the weapon that fires the bullet.

Oh no, do NOT name a beagle snoopy. That's just not at all original. BREW (Beagle Rescue Education and Welfare) has a whole lot of adorable dogs of all ages who come with names already (though you can change them). Seriously, they're a great breed. Adorable and cute, but not girly.

You do know that beagles howl. All. The. Time. Don't get a beagle. Please. While I love the jujubean, I can't think a beagle will be good.

Anonymous: thanks for the tips.

You can call me, 'Sir': Dunno know about a beagle. They are loud and destructive (roomie had one in college)


Juju Bean: Thanks. I like beagles, but they are high maintenence.

Velvet: I tend to agree.

nope..greyhounds are lazy ole couch potatoes..and need NO ROOM... kinda pooped from "track life"
kinda wack..but they..evidently.. they make perfect "city" dogs...
and..they are a rescue... so you get to feel good too...
xoxo

Get a medium sized pound dog (not a puppy) and stick to slightly pregnant but unmarried women.

if you buy a small dog please DO NOT carry it around in your handbag. In fact, that suggestion alone is the #1 reason why you shouldn't even consider a small dog. #2 is the bloody yapping sound. Don't buy any dog that communicates by yapping!!

The landlord thing is totally scary!

Man, beagles are getting a bad rap! Every dog has its own personality, and there are couch potato beagles out there, too. Just avoid the young ones!

suicide_blond: hmmmm...papa ninja used to live by the doggie racetrack in florida. Maybe I'll bring back a souvenir next time I go there.


zoom: what is "slightly pregnant"?

M: why would I have a handbag? I don't even know what that is, but it sounds like a purse.

Juju Bean: So I should get one on its last legs?

You know, Ive been thinking about getting a dog too (I have cats). ONE of the reasons is, "Ill get out more and get more excercise!" Sooo NOT a reason to get a dog!!