I think this sums up the situation in Iraq pretty nicely. The Bush chicken hawks are so hard up for talent that they are sending me a letter, hoping that I can get them out their mess. 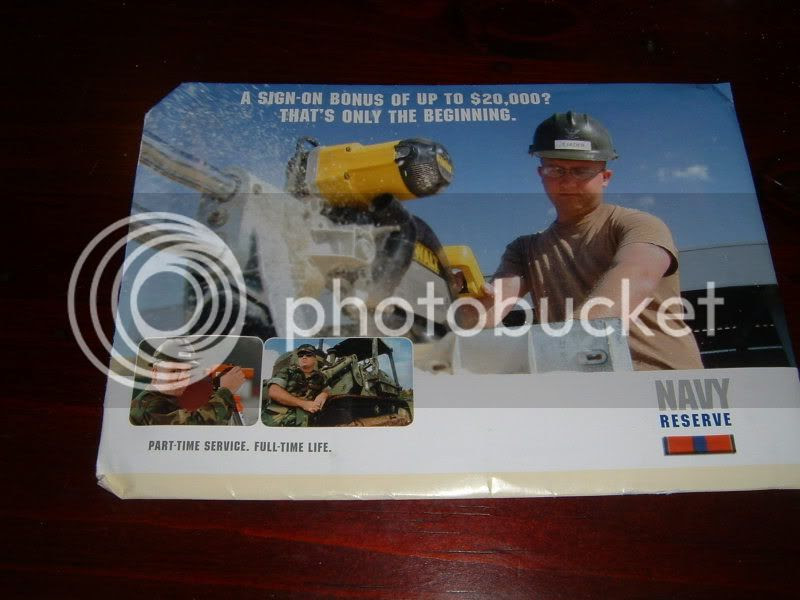 First of all, I don’t know how the gob’ment knows about my home improvement skillz. I had my suspicions that the CIA and Pentagon were monitoring my blog in the hopes of developing some kind of secret humor weapon, but I never really believed it until now.

This recruitment letter is disturbing for several reasons:

In other news, sometime today, draft dodging sociopath Dick Cheney will become president for several hours while George Bush has doctors shoving a long, thick, snake-like machine up his ass. If Bush finds out that he likes it, does that mean that he will change his stance on gay marriage? Will Cheney pardon Scumbag Scooter Libby during the 2 hours that he is president? If Cheney becomes leader of the free world, will he renounce cannibalism or will he use the Oval office to summon Satan for guidance, like he does at the vice president's residence?

Also, last week I forgot to comment on the Miss New Jersey scandal. Luckily the scandal resolved itself without my having to get involved. However, since most people come here in order for me to tell them what to think, I will weigh in on the scandal so you can opine about it at the next work-sponsored event you attend and the boss will be so impressed by your knowledge of current events and warped logic that you'll be flagged as in independent thinker and you will either end up as the bosses new successor, or you will die by his hand.

Thanks for posting this...now I don't have to do this brain dump myself. Pretty much sums up my thoughts on all the topics very neatly. Now I can go back to eating my pancakes. Kudos!

Oh, Jersey bashing? Wow. Something new, different, and creative! Never heard that before...

Maybe you'd feel better if you just got back to some home improvement projects and wrote about that, instead.

I agree about Bush & Cheney, but don't make fun of Jersey. There are a [b]lot[/b] of things in Jersey to make fun of, but you shouldn't slam a place unless your from there. Leave the Jersey insults to the locals.

I don't know a thing about Jersey, but it never fails to amaze and amuse me to see the outrage when one of these beauty pageant scandals come to light.
Why is it such a surprise that the same girls who think strutting around in high heels and a bikini in front of a group of "judges," also think posing for Playboy is a good idea?
I'm sure Miss N.J. is sincere about the world peace thing.
Atmikha

I love it! "If Bush decides he likes it, does that mean they will change their stance on gays..."
Awesome!