So that I can continue to consider this a Home Improvement Blog, without feeling guilty about the lack of progress, I'm going to post a weekly helpful tip that is based on my vast knowledge of fixing stuff (when I actually do real work). Here's the first one: 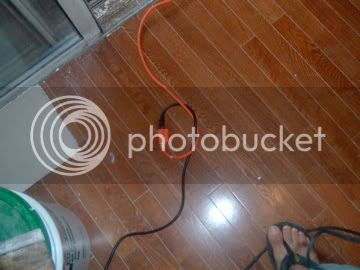 When using an extension cord with your power tools, tie the end in a knot like this. That way, if you move the tool around and pull on the cord, it won't become unplugged.

When people see you do this, they will think you are really handy. You can lie to them and tell them you thought of it, if you like. I only mention this because I secretly think most people who read the internets are liars...especially the ones from Nigeria who keep emailing me with investment advice. You can't ALL be the son of the former Prime Minister. Even with polygamy, the numbers would make Wilt Chamberlain envious.


In other news, on my way home from work Friday, I saw a line a half block long of people waiting for the iPhone. I saw on the news that some people have been waiting in line for a week. I don't know if I feel envy or pity for someone like that. The fact that you're life is so empty that you would spend a week of it in line so that you can buy something one day before anyone else means your life is pretty empty. The fact that you can take a week off work to sit in line for a phone means that your job is really not important, or you're unemployed or independently wealthy. So again, I don't know what to make of these people.

In still other news, I'm discontinuing the Investing Ninja website. The powers that be decided it's not a good idea for me to give investment advice, in light of my occupation. Since a paycheck means more to me than you random imaginary people, it's gone. I'd take the site down, but I lost the password (which is another good reason to discontinue it). Plus it takes a lot of time, and no one ever accused me of working too hard when I'm not getting paid for it. So from now on, if I feel like posting something that could be construed or misinterpreted as investment advice, I'll password protect it and you can ask for the password if you want to know what it says.

And finally, because I'm not shy about taking credit where credit taking is due, it's been about a year since I came out with the first Ninja Stock Pick on this very site. For those of you who are curious about how I did, I'm up about 37% for the year (which is better than almost all of the professional hedge fund managers). MAD SKILLZ, Bitchez!!! * I attribute the success to
Next week I'll try to finally post some tuxedo pics. Also, maybe some pics of the Kitchen, which is looking better...a little. If there is anything else you want to see on here, let me know and I might consider it...or not.


*I think I'm far enough above the S&P 500 for my results to be considered to be non-random, but then again, I don't know if it's fair to compare my results to professional money managers because if I'd been running a bigger pool of money, my frictional costs might go up, which could erode my results. Also, I placed bets in accordance with my confidence level and, as a result, the portfolio was more concentrated than most, which may have produced some unusual measurements if you calculated the semi-variance, Sharpe ratio, or beta of my investments.
Posted by HomeImprovementNinja at 6:35 PM

37% sounds impressive, but most hedge funds charge a big management fee, don't they? Is that percentage before or after fees? Any stock tips for your readers?

Your return for the year is mui impressive. I'm currently sitting at ~15% and high-fiving myself. I wouldn't call this a bull market by any stretch of the imagination, either, which makes any returns great, but yours even more en fuego.

I already hate the iphone line-up people. Is that wrong? oh well.

That's a good point. Assuming that I charged myself the same 1% management fee and 20% of profits "perfomance fee", the results would be 29.23%. Still WAY above most professional money managers. (and I don't give stock tips, remember).

M: no, I hate them too. I wanted to take a picture of them, but I hate photographing losers.

Holy cow, it's a small world. I just posted the same tip on my blog! (The extension cord, not the investing)

I also plan on running a series of "Quick Tips". I guess we'll see how much great minds think alike. ;-)