Escape From NY: I Rub a Bull's Balls

I'm trying to decide whether I would want to go to NYC at all. Walking around there, reminded me of the things I hate about New York: the crowds, the traffic, the urine on the subways. I took the Amtrak Acela from DC to NY. It's better than flying because
Within seconds of arriving I was greeted with real NYC hostility that is usually reserved for tourists (since I was rolling a carry on bag with me, they must've thought I wasn't local). I had the following happen to me over the course of a few days:
It was almost like a Bennetton ad. Yes, that's what NYC is, a Bennetton Ad with angry, ugly people.

My impressions of NYC:

Another thing that bugs me in NY is that the apartments are really small. Before I bought the ninja fortress, I lived in a 435 square foot studio in Dupont Circle (like DC's lame version of Greenwhich Village, for those of you in NYC). In Manhattan, I'd be paying a lot of money to live in a studio that was no where near as big as that. My cousin, lives in a nice building in the east village, but her place is so small that she doesn't have a TV or dining table.

She does have HER priorities in order though. She's a shoe designer, and she's got lots of shoes. So even though she doesn't have a room for a TV, she's got almost two closets full of nothing but shoes.

Here is my faboulous cousin. She's in China right now, looking at some sweatshops.

I don't know how many shoes she's got (I don't have time to count that high, but I did notice she's got at least 13 pairs of boots.

Here's some of them.

We hung out and went to hipster bars in NYC. Another thing that bugs me about New York is the pretense. Three different hipster bars, yet none of them had Coronas. I was told by a snooty waitress that Coronas are only served at places for the Bridge and Tunnel crowd.
Really? I got news for you, sweetie. Get off your high horse. You're a waitress, not Paris Hilton. We look about the same age and I'm sure I've got more stamps in my Passport than you do, so fcuk you and get me my beer.

Back to the story. So we hung with her, a couple of models and a designer she knows. A fun time was had by all.

Here's a pic of a model, my cousin and the designer.

The next day I had to go downtown to Wall Street to rub a bull's balls. Perhaps an explanation is in order. A few blocks down from Wall Street is a giant brass (bronze?) sculpture of a bull. A lot of tourists take pictures of themselves with the bull's horns. I was after a different part of its anatomy:

***FLASHBACK TO SEVERAL YEARS AGO***

Scene: Me talking to my friend, Duckets, who works at an investment bank.

Duckets: No, that balls thing is a myth. Most people on wall street don't believe in that. The only time you see that is on a big trading day when the market is tanking or something. Then you'll see a line of traders behind the bull waiting for their turn.

Me: Have you done it?

Duckets: Not very often. Only when I really need it.

Me: So you only rub the Bull's balls on special occassions?

Since I don't visit NYC every day, I guess that qualifies as a special occassion and I decided to rub the bull's balls for luck. In case you thought I was making up that story about the balls. Take a look at the following picture. You'll notice that the balls are much shinier than the rest of the sculpture. 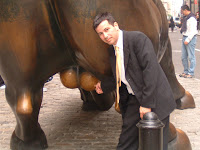 I was in NY for the first time a few weeks ago and thought they needed fewer Duane Reid pharmacies and more liquor stores.

Trips to NY make me glad I live in NJ and that's just scary.

so did you stick to seventh ave in midtown? if so, that's unfortunate. next time, put the whole hand on the balls. hotttt.

Wow! I am mucho jealous of your cousin's massive shoe (and boot) collection. Did she design all of them herself?

Funny line about not being contestants on the Amazing Race. I guess it wouldn't be NYC without some such rudeness.

I guess ninjas clean up pretty nicely -- you look hot in that suit!

I take the train up there all the time, but Acela is a joke. Almost twice as expensive and only saves you 20 minutes. Unless your company is expensing it, stick to the regular train.

Dupont Circle is more like DC's version of Chelsea. Adams Morgan would be the equivalent of the East Village, and the West Village equivalent would be something like Glover Park or Cleveland Park.

It's true. The papaya drink tastes like ass. The mango is far superior.

zoom: I agree about Duane Reade, but can anyone really have too many liqour stores?

Anonymous: Jersey is scary to the rest of us. It's one giant speed trap.


Carrie M: Carrie, I was in Midtown, the Financial District and the East Village. And I'm not putting incriminating evidence of the bulls balls on my blog.

DCBrownie: Yes, most of those are her designs. And thanks for the compliment :)

You can call me, 'Sir': I think that only applies to statues. For everyone else, it's hairy palms.

Anonymous: If I was paying, I'd take the slower train.

Ms. Tart: True, but I can get mango anywhere.

Well, at least you got to hang out with cool chics.

Greetings from Black & Decker. (www.BlackandDecker.com) I'm looking for bloggers who want to test new Black & Decker products on their do-it-yourself projects before the products hit the market.

As a woman who has sacrificed prime closet real estate to make room for more shoes, I can definitely relate to your cousin. Where'd she pick up those slamming boots?

Yes, the suit is nice but I'm waiting for a pic of the tux.

Well, good luck on the job prospect. I am totally with you on the Amtrak option. It's the only way to sanely travel to NYC!

And I'm in awe of your cousin's two closets of shoes. Drool.

Momentary Academic: Yes, that's what I say whenever you and i meet for coffee.

JoJo: I'm pretty sure she designed most of those.

LJ: yeah, i'm a big fan of the Train. And what is it with you girls and shoes? I don't get it?

As always, HIN, you're overreacting to what that vet said. That's the new, hip, Manhattan term for "cool dude".

Just the other day I left my barista a nickel as a tip and she called me a "wall street cocksucker", which made me feel warm and tingly for being so generous.

Okay, wow. That is a LOT of shoes. But to each her own! I'm feeling you about the small apartment thing. I'm sure NYC would be a fun place to live, but there are definitely a number of tradeoffs.

Arjewtino: I didn't know he meant that in the nicest possible way.

zandria: yeah, I was just discussing the tradeoffs with a friend of mine who is living the Philly exurbs in a HUGE house.