The One Where I Plumb.

THE ONE WHERE I PLUMB

Because I am a masochist, I will now do a post about plumbing. This will prove to the naysayers that I once in a while, when Catholic Guilt overwhelms me, I do some actual work. Let’s just call a spade a spade and say that the plumbing gods don’t love me. While my little homemade waterfalls were frustrating in the past, now things are different. It sucks to have a river of water cascading down three floors when your house is still all plywood and drywall, but once you put in expensive hardwood flooring wall to wall, the prospect of a flood is downright terrifying.

Needless to say, that while I “tested” it for leaks by filling the pipes up with water, I didn’t give it the full test because only a greater idiot than me would turn on the heating system when it’s nearly 100 degrees outside and 90% humidity. So let's hope that this works in th the winter. 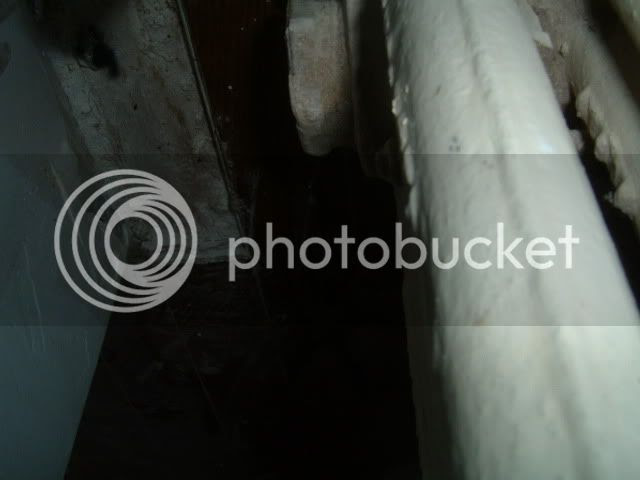 I was thinking of running a contest for this picture. I was going to give away a prize to whoever guesses what this is a picture of, but then I realized that I would have no idea who the winner is because I don’t know what it is. This is a pretty scary realization because this is something in my house and I have no idea what it is. Is it deadly? If so, I should find out what it is before it tries to kill me. Unless it’s out to kill the mouse, in which case I’ll let it be.

Now Back to plumbing

First I had to drag the radiators (which way about 300 lbs each) across the living room floor by myself, without scratching the hardwood, and position it into place. How does one person move 300 lb radiators across a delicate floor by himself without scratching it? Well, if you are a mere mortal, the answer is : very carefully. If you are a ninja (or even part ninja) the answer is: using your mad chi. That’s right people. I didn’t even have to touch it. I moved it partly using telepathy and partly by using some chi kung exercises that I learned off a bootleg DVD that I bought in Chinatown for $3. That’s probably the second best $3 I ever spent in my life. The best was the Subway fare and back that I spent to go see a girl in my High School math class wherein I lost my virginity. Don’t get me wrong, the bootleg chi kung DVD is good, but it wasn’t THAT good. 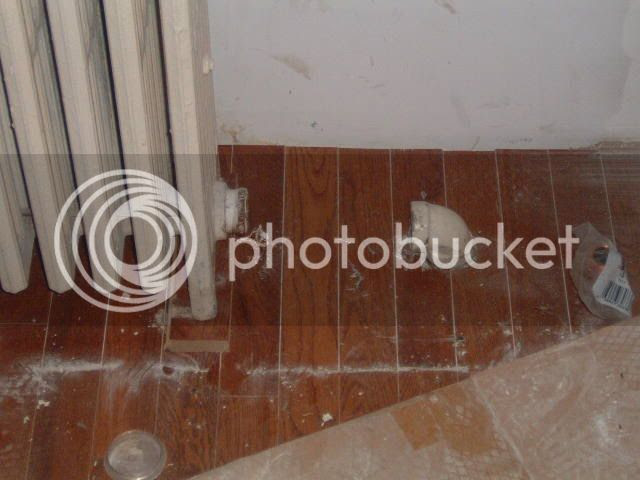 This is what we were working with. I had to connect this radiator (and another one) to these pipes. Let the games begin. 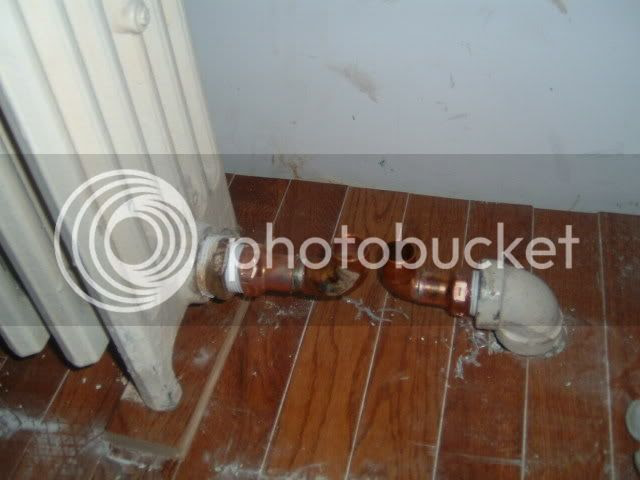 Since the radiator is too heavy to move around (even with more than one person) I put these little loops in there. 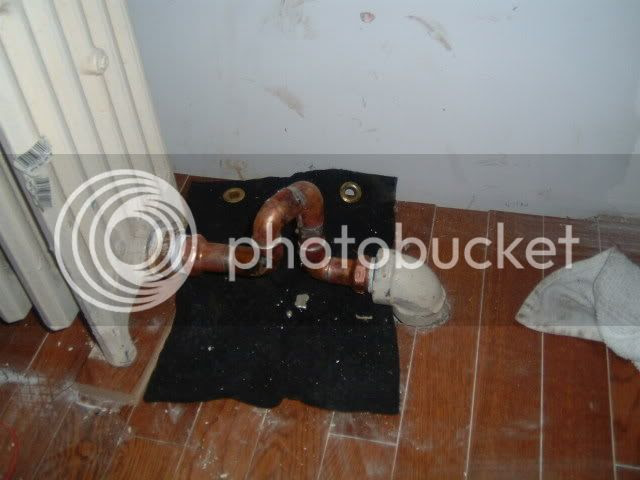 That way I can close it off with a few elbows in a u-shape, like this. It's easier cutting copper pipes to size than it is to move radiators around by yourself. Especially on my expensive new floor. 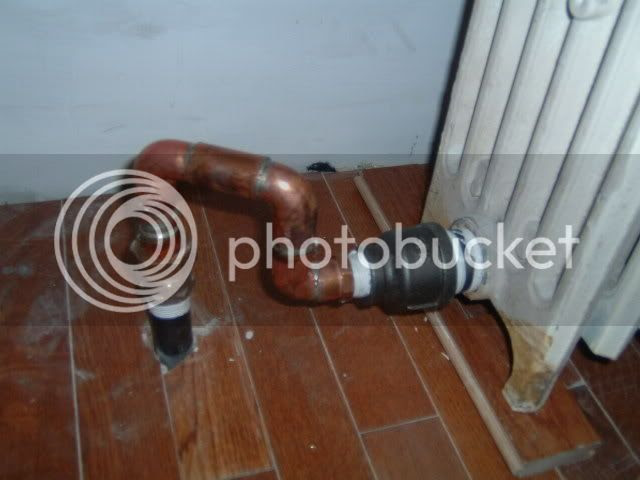 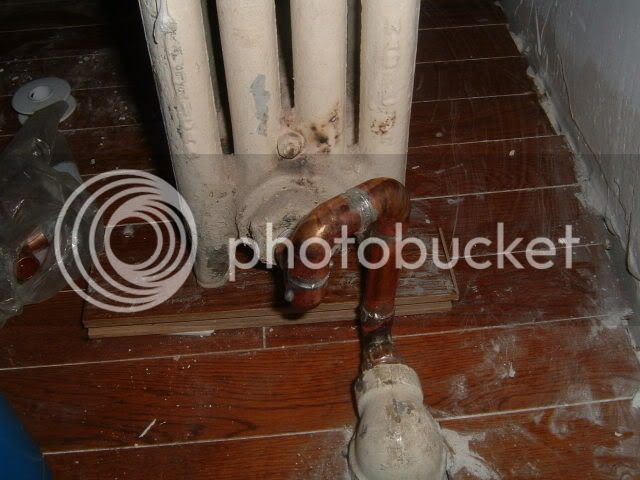 Here's another one that I did. Notice the loopy thing again. What a great Idea. 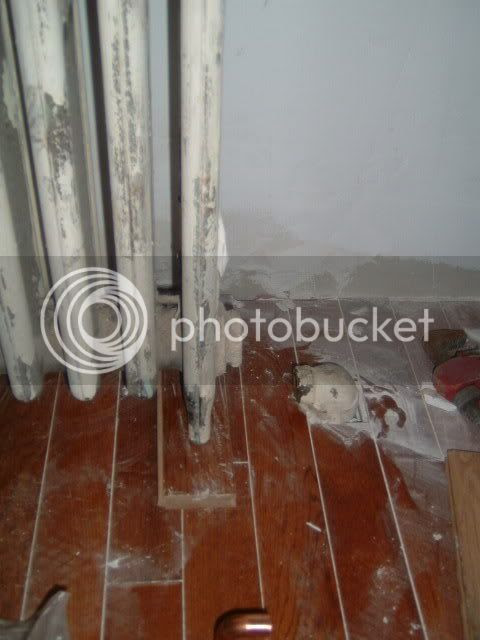 And repeat for the other radiator.
Posted by HomeImprovementNinja at 2:47 AM

Are you talking about the stuff on the pipe? It's probably fire retardent. Probably. I'll ask my Dad - he's a builder.

Hey, you should use di-electric unions when you connect copper to any other kind of metal, in this case steel. If you don't, a reaction occurs between them over time and eventually it will corrode through, leak, and fkuc up your nice hardwood floors. I've also heard of people placing several inches of brass pipe between say copper and galvanized, but I don't really buy that, plus it would be hard to do in your case...2 cents.

A post about plumbing? Wouldn't that make you a sadist?

Your plumbing is crap. Do it again till you get it right. You can move the radiators with thick felt and slide it across the floor.

anon: I Don't believe in Di-electric unions. I use brass when there's room and lots of teflon where there's not.

reid: it had to be done.

anon: why use felf when I can use chi kung energy?

Im not a plumber, but......that doesnt look great, i hope you put some pics up there of some type of improvement..love kikimia aka "original sailor moon"

You can't rely on teflon tape to perform the same function as a di-electric union or nipple. Take it from someone who has seen what happens. One that I fixed had corroded the male threads completely off of a galvanized pipe, and another one built up so much "gunk" that it stopped water flow through the connection. Both had teflon. The reaction occurs inside the pipe, where there is no teflon tape.

I hate to pile on, but have to echo the valid concerns about galvanic reactions between the copper and steel, even if separated by dielectric unions, and especially just teflon. The problem as stated will end up destroying the steel nearby, particularly that nice Capital radiator, and introducing a lot of rust into the system water. You've also eliminated any ability to isolate the radiator or throttle back the water flow by removing the valve(s). You also have to take care when reducing pipe sizes and creating odd and extra unions and bends that may contribute to unbalancing the system if it is still a gravity system. I would really recommend dropping by a site like www.heatinghelp.com and studying how the "dead men" really took care of these systems so you can get the best out of it and also not put yourself or your nice new floors in jeopardy. Good luck! P.S. I realize the original blogger hasn't updated this blog since 2006, but thought it was important for anyone looking for examples of "how to" to realize this is not the right way to address this challenge. It will make the problem worse(well, create new problems) over time that will impact the entire heating system potentially including the boiler.