In an attempt to distance themselves from disgraced lobbyist/convicted felon Jack Abramhoff, prominent republicans have been going to extraordinary lengths.

Many lawmakers have donated his political contributions to charities,

Bush initially denied knowing him, then suppressed photos of himself with the criminal.

Some prominent Republicans have even introduced lobbying reform legislation to prove that they are no crooks. 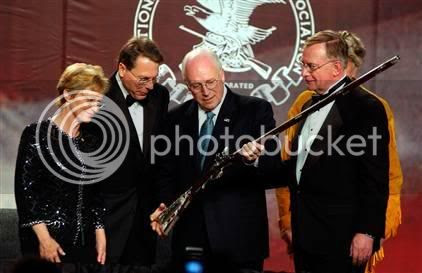 Proving that he is more anti-corruption than the rest, Vice President Cheney recently shot a lobbyist in the face. That's right. He met one of the most powerful lobbyists in Texas and did what any upright american would do: he shot him in the face with a 12 gauge, then ducked the reporters and went into hiding to ummm, fight terrorism...and corruption. Ted Kennedy, eat your heart out. 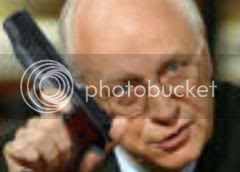 "Never let it be said that I am soft on corruption" said Mr. Cheney.


In home-improvement related stuff. It snowed 10" in DC this weekend. I didn't want to shovel out my car and driveway to get some salt for the front of the fortress (because I am a lazy turd on the weekends). My metal stairs, however, are probably lethal to people who walk on them without a ninja's cat-like reflexes (like my mailman).

So what to do? I've seen old ladies use regular table salt in a pinch, but I don't have the cheap regular salt that old ladies use. I have the pretentious yuppie sea salt that costs like $12 for a little jar, so forget that idea. 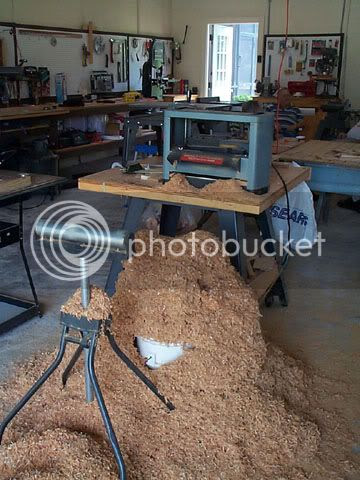 Then I decided to use a bunch of the sawdust from my table saw in the basement. I threw it on my steps and I didn't see a dead mailman when I returned so I guess it worked. The wet sawdust looks kinda nasty, but It's biodegradable and it will probably blow away when it's dry, which will keep me from having to clean it up....sweeet.


(not my actual workshop...mine is a lot smaller and marginally cleaner, as far as you know).
Posted by HomeImprovementNinja at 12:33 PM

Actually, it was a 28 gauge, but since a shotgun is hardly a ninja weapon, I suppose you can be excused for that mistake.

I feel bad for the lobbyist, and not just because he's a lawyer. Can you imagine what he told his wife?

"I really hate that a-hole. I have to laugh at his jokes, let him win at golf and now...let him shoot me in the face. Man, what I won't do for a sweet no-bid contract."

Why isn't Cheney in jail yet? Seriously. Freaking amateur hour over here! Lock that bastard UP!