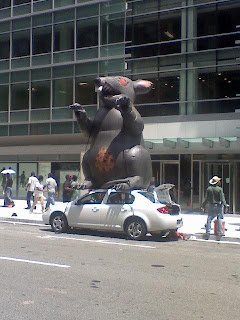 I'm not a huge fan of unions. It doesn't look like they did GM, Ford or Chrylser a whole lot of good. However, I can understand how it's human nature to want to be paid more for doing the same thing you would normally be doing.

I also get the concept of picket lines. The goal is to annoy people and whine and stomp your feet like a child until someone gets frustrated enough to just give in to your immature demands and give you what you want so that you will shut the hell up. But...I don't get the giant rat...WTF???

Okay, it's annoying when you're banging those drums loudly and I can't concentrate. And it's even more annoying when I read in the newspaper about how you hire homeless people to walk the picket line because the unions are too lazy to even stand in their own line. But a giant rat? Seriously? I was going to stop and ask what it's about, but, like conceptual art, I think it means whatever you want it to mean, and it's not supposed to make sense.
Posted by HomeImprovementNinja at 1:54 PM

The rat is supposed to be used to let people know that the company is hiring nonunion labor during the strike. It's basically implying that the company is a sneaky rat for going behind the union's back, instead of addressing the issues fairly and directly.

The rat is there to say the company is terrible - but also as a warning for people not to be like the rat and work for this company during a labor dispute.

I like it. It's pretty old school and it's entertaining when you see it. Got your attention...right?

Yeah, you got the attention.