Someone wrote a whole book on the topic of "Why Men Love Bitches". First of all, it's a stupid title because it begs the question of "Do men love bitches?" It assumes the answer is yes, and the author presumes to tell people why that's so. And since women are SOoooo good at figuring out what we men think, this author, for fifteen dollars, will tell women why it's not their fault that they are miserable and single.

When I imagine what it would be like to be married to a bitch, I find it hard to imagine because when I see my imaginary wife "Karen" being a bitch, it's hard to imagine why I would ever fall in love and want to marry someone like that. By the way, in my imaginary marriages, all my wives look different, but the bitches are all named Karen. I think they are named Karen because Karen is a bitch's name, or maybe they are named Karen because I dated a bitch named Karen who killed my cat when we broke up. Before I get sued, let me rephrase that and say that my cat died in mysterious circumstances while in her care. Karen never liked the cat because it was a stray that my ex had rescued and given to me because she wasn't allowed to have cats in her apt. I guess she disliked it because it reminded her of my ex...and because she was a bitch. Nonetheless, we broke up and 48 hours later my cat was dead. You do the math.

Anyway, I didn't think that I was one of those men who love bitches, but I slept with a bitch last night and I fell in love with her. Here is a picture of her: 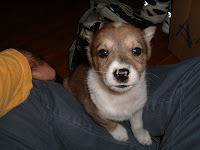 Your name isn't Karen, is it?


Anyway, she was part of Velvet's dog rescue and I got to baby sit the night before. I was tricked into it, but whatever.


Velvet: Are you home yet?

Velvet: I'm coming buy with one of my bitches and I want to know if she can stay with you for the night?

HIN: Is she cute?

Anyway, that's how I got tricked into letting the bitch come over...with her puppy. Like all bitches, Karen was needy and wanted to cuddle and be reassured that I loved her unconditionally. 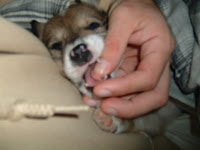 And like all bitches, she likes to hurt the ones she loves.


It was difficult letting her go, but I think she'll be happy with the two lesbians who took her home the following day. Who wouldn't be happy if two lesbians wanted to take them home?
Posted by HomeImprovementNinja at 2:31 PM

Awwwwwww!!! Too cute! Why didn't you adopt her?

awww...you should have kept the puppy!

and the book- I read it (back in my single days), and the title is a bit of a misnomer. by "bitch" the author is (from what I gathered of it) talking about women who don't let people walk all over them. The basic message is "don't be a doormat."

but then again, it really wasn't a good book...plus, I'm sure you weren't looking for a dissection of the book :-)

1. that puppy is so cute, my ovaries hurt.

2. men do love bitches (and concubines) - except my Fiance. I think I found the one man that isn't into the bitch/concubine thing.

Not that it matters to the dog, but were these lesbians the ultra-hot adult-movie type? That'd be sweeeeeeet.

If you miss your cat, you can have the one my wife brought with her when we got married. I'll stick him in a box and send him right over to you.

you must a have ninja heart of steel...i mean who could spend the night with her..and NOT keep her... god bless velvet AND the lesbians... and if you need to cry in a beer over getting your heart broken by a beautiful bitch who likes to kiss and cuddle.. give a shout..
xoxo

Cute puppy -- sorry you didn't get to keep her. It sounds like she'll have a good home, unless the lesbians view pet ownership in the same way as Ellen DeGeneres.
About your cat: how traumatic for you and disturbing if your suspicions are correct. Sorry to hear about that.

Now would be a good time to tell you about the difference between a bitch and a whore.

A whore will sleep with anyone.

A bitch will sleep with anyone but you.

I still think that you should have taken her. BOO!

Good thing you brought this up, cause the writer was interviewed on the radio station in Miami
I have been dying to read that lady's book, but the one: Why men marry Bitches. And actually i have the answer to that. Because My hubby to b is marrying one. The books basically a message to women for empowerment and also letting people know that theres nothing wrong with being strongminded and blunt. Even when it gets you in trouble, my hubby knows that i will speak my mind even if it makes him proud or cringe, he lives for it really lol
poor guy, hes a masochist

Ninja! Super cute puppy. If they give her back, let me know 'cause I would take her in a heartbeat.

And...please tell the Legal Ninja that he is being paged over at HouseinProgress.net to weigh in on today's entry.

Now I'd heard that Karen is always a douche bag... not a bitch... I think you need to up your Dane Cook intake.

This is hilarious! Especially the part about all the bitches in your dreams being named Karen. It would certainly serve you right if you ended up falling in love with someone by that name...

RE: 2-legged bitches: According to my ex I was a horrible bitch. I told him he should know -- he made me that way. Ha! (Yet even though he made my life miserable and claimed I made him miserable, he fought the divorce tooth and nail even though I wasn't trying to take any money from him. But I luuuuuuuvvvvv you, he said. Gag me. He only loved himself. Literally. Ick.)

My "new" dh says (and we've been married over 10 years now) according to him, not only am I not a bitch, but I'm the best thing to come into his life. :)

So I think bitchyness is in the eye of the bitchholder. :)

RE: the 4-legged kinds of bitches -- how could you NOT fall in love with her, Karen or not?? Did you ever stop to think that really cute dogs are bitch--eh, babe magnets? Better than artwork, that's for darn sure. And you can troll places like PetSmart and others with your 4-legged bitch looking for the 2-legged kind.

And it's a built-in bitch-ometer. If your 4-legged bitch doesn't like your 2-legged bitch, it's a good sign the 2-legged one needs to go.

I was having a great time reading your blog until I remembered my name is Karen.

Ashburnite: Yeah, but it was for the best.

iloveupstate: sorry about your ovaries :)

Muskego Jeff: not hot lesbians...real ones.

suicide_blond: yes, giving up a puppy is part of ninja training. Well, that and killing.

Momentary Academic: I know, but u think everyone needs a dog.

SAILOR MOONa: whatever floats your boat :)

zandria: trying to jinx me?

MadMumbler Mommy: yeah, thats why I need a cute doggy.

Anonymous: your not THAT karen are you?

Spent the bucks, buy the book n read it yrself to find out why.

No bitch (Babe in total control of herself) wld like u.