I think sometimes life becomes surreal when it's most banal. I was walking my usual commute yesterday and nothing out of the ordinary happened, just like every day for the past five years, when I heard a crashing sound and I saw a guy on a bicycle flip head over feet when he collided with a Miata. I took off my headphones and walked accross the street (for entertainment, not because I cared if anyone was injured), and I assessed the situation.


The guy on the bike wasn't wearing a helmet, but he looked unharmed (not so for his bike). He was a tall, bald black gay man. (by the way, only black folks should shave their heads bald, when white people do it, it looks gay). Now, normally I would agree with those people who say that you can't tell if someone is gay by looking at him, but this guy was an exception. You can usually tell when someone is gay if they are flaming, and this guy wasn't just flaming....he was on fire. When he was yelling at the guy in the Miata (yes, a guy was driving the Miata, don't get me started), he sounded like Wesley Snipes in that To Wong Fu movie. 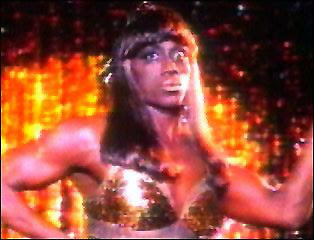 "You almost KILLED me...you crazy old man, with your little midlife crisis car, why don't you look where you're going!"

The driver, a short, old, white guy in mid 50s with a piece of toilet paper stuck to his face (not making any of this up) to cover a shaving accident got out and instead of looking at the biker, was obsessing about his passenger side mirror. Two accidents in one day, chief...maybe you should call it a day. Normally I would tell someone if they had toilet paper on their face, but I didn't like this guy very much.

Old old lady with blue hair stopped and asked the bicyclist if he was okay and wanted to call an ambulance.

"No, I'm okay, but thank you for asking...unlike SOME people...yes, I'm okay sir, really I am, no need for you to get off your black berry phone or anything to see if I broke anything. I' m sorry if I inconvenienced you when you ran me over...did you spill your latte?"

Then the old lady started berating the old guy to get off his phone and told him what a jerk he was.

They stood there for a few seconds, the bald black man fixing his bike wheel, the short white man with toilet paper on his face fumbling with his blackberry, and the blue haired lady lecturing on rudeness...it looked like David Lynch movie. The only thing missing was a midget and an old lady carrying a log.

Then the flaming bald guy got on his bike and left, and the old guy with toilet paper on his face got back in his car and drove away. The lady with the blue hair turned into a midget and ate a lion with her....okay, that last part didn't happen, she just walked away too. Just another banal commute...
Posted by HomeImprovementNinja at 4:33 PM

A few days ago I went to the big Salvador Dali exhibit out here. I could swear that one of his paintings included a Miata, a crushed bicycle, a bald gay black man, facial toilet paper, a blue-haired old lady, and a Crackberry. The colors were extremely vivid, and everything was slowly melting.

Did you ask the black guy for advice on what kind of dog to get?

wow, thats a hell of a mix of people in ur city, it kinda sounds like South Beach hahha

A Miata? Too bad that black gay guy didn't whomp his ass just for general principles. Nothing like an impotent four-wheeled phallic symbol that screams, "I'm too broke/cheap-ass to afford a Corvette."

I'm surprised the Miata wasn't totaled. It never struck me as the type of car that could take a punch, regardless of whether the punch came from another car, a bicycle, a tricycle, large dog, etc.

As soon as I saw David Lynch, I was done. Now, I will get some tissue...for my laughing/crying eyes (not for any mishaps from shaving...of course, I'm a girl so that would really be surreal, and a bit gross).

I love Salvador Dali's titles. I am trying to come up with a good title for this tableau if the insanity of this situation were a painting.

Too bad about the lack of a midget and a log lady. A dancing midget would have really upped the ante.

check it out ninja, its ninja dancing in the parking lot isnt it hilarious...

Nice blog. I will keep reading. Please take the time to visit my blog about Levitz Furniture

Why don't I ever see something like that during my commute? It would definitely break up the day a little bit...

Wow, been too long since I was last here. Look what great stuff I missed?

Crazy story... And I agree. I'm shocked the Miata made it through!