On the Road Again Part 3: I threaten a Dog

Because I don't believe in straight lines, I am almost done re-capping my trip to St. Louis. You can read the rest of the story in Part 1 and Part 2.


When I first met the world’s most annoying chihuahua, Crash, I sat down on the couch and a blurry running rat-like creature scurried up my leg, scaled my torso, and gave me a headbutt in the chin, then started licking my face.

The dog was strangely needy. He was addicted to attention. I know this because he would shake constantly, like he was going through withdrawl symptoms if there wasn’t someone constantly petting him. I thought I could escape the dog's clingyness when I went to sleep, but I was wrong.

I slept on the futon in my friend's guest room. Despite his repeated denials, I have a sneaking suspicion that the futon was in fact, the dog's bed. My old roommate has 3 daughters and 2 chihuahuas. All his daughters and one of his chihuahuas seemed normal, but the smallest of the five, a dog the size of a burrito was mysteriously taken with my company. Despite my best efforts, the dog manged to burrow his way under the covers and decided that he wanted to sleep in the space between my chin and my shoulder. I rolled over a couple of times in my sleep and gave it my back, and when the dog wanted to work his way back to the front of my neck, he did it in the most annoying way possible: by walking on my face. As if this wasn’t bad enough, about the third time I rolled over in my sleep, the dog had enough of my fidgeting and decided to keep my from rolling over by biting me on the nose. Asshole dog!

I shoved him off the bed and saw him climb into one of my shoes and take a seat. At first I thought it was cute that the dog was so small that it could sit IN my shoe like it was a papasan chair, but then a frightening thought occurred to me:

“Dog…I know you don’t value our friendship as much as I do, but if you're sh1tting in my shoe, you’re about to have a very bad day.”

Luckily, the dog had decided to show a little class. I think he realized that if he shit in my shoe, that I’m the kind of person who would shit in his dinner bowl as payback. (yes, I sometimes wonder about my parenting skills also). Anyway, I took a picture of him so that you folks would get an idea of what I was up against. I put my hand near the dog so you get a sense of how small he was. 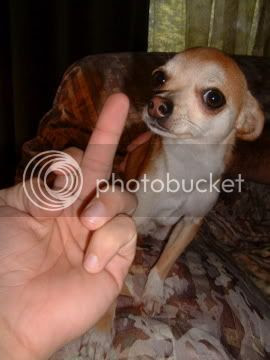 SEE!
Posted by HomeImprovementNinja at 10:52 PM

Awwwwwwwww! That is the cutest doggie that I've ever seen. How can you possibly hate her?

Now THAT is a gay person's dog. It's even an insult to call it a dog. Please don't get one.

You crack me up!

That's no dog. A real dog would feed a family of four for at least two meals. That thing is an appetizer at best.

I loathe the chi-hua-hua. It's tiny and spastic and looks sick all the time. Also, it has that annoying accent and enthusiastically markets taco bell's horrible blend of ground up horse and day-old ass as something worth eating.

I'm such not a fan of chihuahuas. And I've heard they're very bossy and needy. The worst of everything all rolled into one tiny rat-like dog.

That's not a dog. A dog is tougher than a cat.

kathy: Chihuahuas weren't on my list. But it's okay to have them if you have kids (and they are girls).

Muskego Jeff: It's not much in terms of house protection either, but it's got comedy relief.

You can call me, 'Sir': And what's with the shaking? Are they cold ALL the time?

Lisa: "Bossy and Needy" pretty much sums it up.

Anonymous: You can't make up your own definitions. It's, technically, a dog.

I didn't know you're roomate was Paris Hilton.

poor doggy, he must have hated your stay lol

Chihuahua's are such a pain in the ass. I have no idea why someone would let one into their home, though I guess the pleading of 3 little girls can weaken any man's resolve.

I hope you're not considering adopting one of those dogs.

Above Average Joe: I think Paris can afford to rent her own place.

SAILOR MOON: I think he was indifferent. Me, on the other hand...

Lemmonex: Yes, you women always get your way, eh?

Anonymous: Not after that weekend, no.

Small dogs are always hungry for attention. I have no idea why chihuahuas shake like herion addicts, so I can't help you out on that one.