I have been thinking about what it would’ve been like if I lived in DC before there was air conditioning. It sucks that I don’t have central air conditioning (yet) but at least I have window A/Cs.* It’s bad enough walking from the metro to my (badly) air conditioned ninja fortress, but if I lived before there was such a thing as A/C, I don’t know how I would’ve handled it. It's a hundred degrees and really humid. If I had been a lawyer a couple of hundred years ago, things probably would’ve reaalllly sucked, when you think about what people dressed like back then. 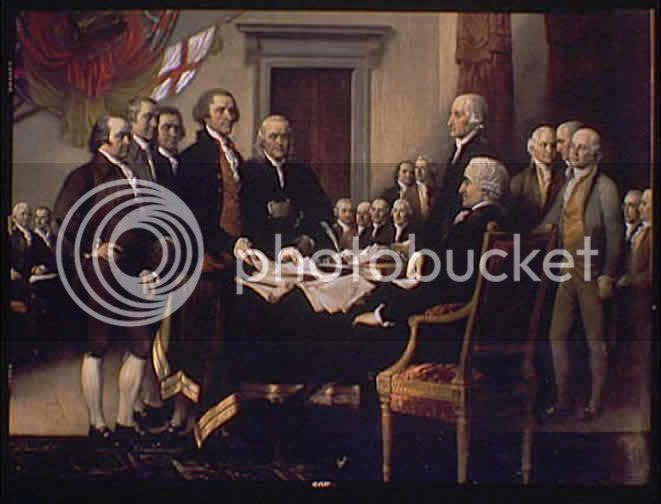 
It's no secret that DC was built on a swamp. Even if you didn't know that, if you spent some time here in the summer you would figure it out pretty quickly. If I worked at some office with stuffy lawyers a few hundred years ago, my whiny ass wouldn't be very happy.

Ninja: Tis' soooo freakin' hot today. I wish I t'weren't required to wear these colonial outfits with the powdered wig. I am sweating like a frenchman. There tis a trail of sweat down my chest and it's formed a pool of water 'neath me bollocks!

Barrister: Yes, bollocks sweat is quite unpleasant, I daresay.

Ninja: I wish someone would invent a device that used air to cool oneself off.

Barrister: There is such a device. Tis called a hand fan, but the only men who use such a thing are those kind of men.

Barrister: I forget what they call are called, but you know, those men who are overly effeminate and are sexually attracted to other men.

Ninja: You mean the British?

The sad part of living back then is that making that little joke would brand me a as a traitor because freedom of speech hadn't been invented yet. Therefore, after making that joke, the Barrister and I would have to quit our jobs and join George Washington in order to fight for the right of free speech so that a few hundred years in the future, the rights that I fought for would be illegally usurped by corrupt politicians. Anyway, it's lucky that I wasn't fighting in the revolutionary war because I don't like people shooting at me, so I doubt that history would've remembered me for my valor under fire.

George Washington: The British are coming!

George Washington: NO! Hold your ground. Wait 'till you see the whites of their eyes!

Ninja: Then can I run?

George Washington: NO! No running!

Ninja: What about surrender? They look like they would take prisoners alive. I think I still have the white flag from last time.

Yes, if I had been there, things would be really different. The history books would be talking about the short-lived American rebellion, and if the English had won the war, then we'd all be speaking English instead of, well....nevermind.

*In my defense, the ninja fortress is a military installation and it's meant to repel invaders and provide a forward base for elite reconnaissance units, not to be some cozy bed and breakfast with frilly niceties like central air conditioning and TiVo.
Posted by HomeImprovementNinja at 3:15 AM

I had a similar realization this weekend.

Nowadays -- for example at the Virgin Festival on Saturday -- women were wear very little clothing, and despite the fact that its 100 degrees, almost no one passes out.

All this, and I spent 12 years in Florida, where for 9 months of the year, it's like living in a sauna.

I think the answer is that no one should live in DC pre-A/C. That's just my quasi-high maintenance opinion =)

LJ, you aren't high maintenance at all. I believe NO ONE should live in DC during the summer. It's really unbearable.

Why are you picking on the Brits? Make fun of New Jersey again. Leave them Brits alone!

It was Ben Franklin, I believe, who discovered one could use the talcum powder on his wig for use on the balls, to prevent chafing.

they dont make enough talcum powder..for days like these...
not that i have balls..but if i did..id just expect em to be chaffed til sept... or until AC was invented..
xoxo

If not for air conditioning, every American would still live in New York, Detroit and Cleveland, DC would have just a few hundred sleepy bureaucrats in seersuckers, Las Vegas would still be a patch of desert, and Bugsy Segal would still be alive, with two eyes.

JoJo: Yeah, I wish I could telecommute from vermont or something.

Anonymous: Making fun of New Jersey is too easy.

Phil: It was one of his finest inventions!

suicide_blond: Yeah, you're better off without 'em. Chicks looks better with their own equipment.

media concepts: If we all lived in NYC, why would that be a bad thing?

I lived in Arlington, Va before air conditioning and it was liveable.

We kept the drapes drawn during the heat of the day, used electric fans,
drank lots of tea and lemonade, went to the swimming pool, ate cold cuts, and used wet washcloths on our faces to cool off.

And didn't complain. What would that do?

We would like to do an interview with you about your blog for
www.BlogInterviewer.com . We'd like to give you the opportunity to
give us some insight on the "person behind the blog."

It would just take a few minutes of your time. The interview form can
be submitted online at http://bloginterviewer.com/submit-an-interview

Tarr: without complaints, there would be no blogging. Jus' sayin'

good call with the mike thing...

Spend some time in New Orleans in August. It'll make DC feel like spring in Paris.

Lisa: I don't think I'll be back to New Orleans any time soon.

If you can just accept that you will sweat in the summer, it's really not so bad. Don't fight it. Just lie really still at night, and lots of cold beverages.

Washington, DC without the possibility of air conditioning makes me want to put a gun to my temple. :)

zandria: let's not do anything drastic.