Many of you probably think that I’m paranoid about SUVs crashing into the Ninja Fortress. Well, if you think I’m overstating the risk of vehicle attacks, you’re wrong. Just this past week, there have been 3 attacks on buildings in the DC area. One was by an SUV, which destroyed a building and left 7 families homeless:

In a surprise move, this SUV struck the gas meter in order to amplify the power of it’s assault. Very crafty, my friend. I would almost say Ninja-esque, but a Ninja would never drive a BMW SUV. It’s too pretentious. The proper Ninja Lite-Armoured Assault Vehicle is a Honda CRV. 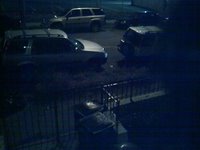 Anyway, in addition to the top-secret fortifications at the ninja fortress, I have taken to parking my NLAAV RIGHT behind a similar vehicle on my block. It makes my house look like a gathering place for the shadow warriors. Maybe some kind of Ninja headquarters. Anyway, just the idea that there may be several ninjas at home at any time is probably enough to deter most attackers.


In other news: A sports car crashed into a Dry Cleaner Store. Doubtless that word of my increased fortifications has gotten out and since they had no idea which townhouse was mine, they attacked a dry cleaners instead. The choice of a sports car was interesting too. Not as heavily armoured as an SUV, but quicker and more mobile. We’ll think on that one.

Or this: A Car in Fairfax crashes into building’s gas meter.
This was actually a good strategy. They seized on the SUV’s gas meter strategy. Since the car is not as strong as an SUV, he stuck the gas line, hoping to maximize the damage to make up for the fact that he’s driving a chick car.

Posted by HomeImprovementNinja at 6:50 AM

It's almost with embarrassment that I have to tag you with the Six Weird Things meme. Usually I don't play these games, but this one seems right. Will you play? Check my blog if you're in a mood.

reya: I don't usually do memes, but since I have thousands of weird quirks, I guess I can spare six.

Always aim for the tires.

This is insane. I suppose I'm glad I live on the 11th floor of an ant farm.

OMG. You and Suicide Blonde!!! There's a match I could get behind. Heh. I said behind. I doubt she'd wear a turtleneck and a parka to a bar!!

Maybe its just me, but paranoia of someone crashing into your house is becoming to worsen. Why dont you just go to the county clerks office and see the recent reports there have been in your neighborhood about cars crashing into homes in that area.
Just a thought...
kikimia

the girl also blogs: Don't think that makes you any safer. A fall from that height could kill you...or the guy you throw out the window.

suicide_blond: wow! I think I may get laid from this blog after all.

Velvet: I would never throw an autographed Brianna DVD. I would throw my severed arm or something.


SAILOR MOON : just because I'm paranoid, doesn't mean they are not out to get me.

suicide_blond: A turtleneck is something that's definitely euro...see next post.

Of course, knowing your extreme phobia of said vehicles, I now have the urge to buy a Ford F-650 and drive it up and down your street in the middle of the night...just 'cuz I'm an asshole that way. ;)

No no no...the Honda ELEMENT is the best kick-ass vehicle in the world.

They can have my E when they pry my cold, dead hands from the steering wheel.

And, as the sticker on the back of mine says, it's a Hummer escape pod. *LOL* (Or the love child of an H2 and a Mini Cooper, take your pick. *LOL*)