My hatred of Santa started when I was 6. I have always thought of him as mean and vengeful. I first met Santa when I was 4. He came to our house dressed in a red suit and handed out some gifts and quickly made his way out the door. I was too nervous to speak to him, but I appreciated the gift. Although he smelled like the same brand of whiskey that my uncle drank (Santa was a Chivas Regal man), and could barely walk a straight line, I didn’t tell him that he should let someone else drive the sled. Luckily he didn’t kill anyone that night, otherwise it would be partly my fault. The therapy bills for that would’ve been crushing.

Back to the story. When I was in second grade we had to write a letter to Santa and tell him what we wanted for Christmas. This was the easiest assignment I ever had in school (except for the time the teacher told me to fix my zipper). I already knew what I wanted: Mazinga. It was all I thought about. 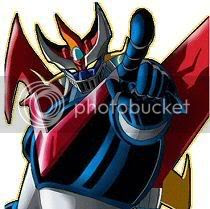 Mazinga was one of the robots in the Shogun Warriors animated series. This was 20 years before the invention of Voltron and Transformers and other giant fighting robots. Prior to Shogun Warriors, my favorite cartoon was StarBlazers. A Japanese cartoon about the earth being attacked by blue aliens. In Shogun Warriors (and Phoneix Five and most other Japanese cartoons) the villains were blue, which made it easy to identify them. But Shogun Warriors easily displaced them. How could it not? They were giant robots, sometimes piloted by kids like me when the adults were captured, and they could do really cool stuff—like blow things up. I was like a middle aged, bald fat guy who discovered his future trophy wife. She became my obsession.

Of all the Shogun Warriors, my favorite was Mazinga. He shot missles from his fingertips and had a airplane that launched from his head. I wanted to be in that airplane, controlling Mazinga. If I was Mazinga, no one (especially my brother) would be able to kick my ass, because I was freaking Mazinga, man. And NOBODY kicks Mazinga's ass!!!

Although Mazinga was only a cartoon, they sold 24 inch high replicas of Mazinga and THAT was what I wanted for Chistmas. If someone had offered to trade me a Mazinga toy for my pancreas, I probably would’ve done it. (actually, I probably would’ve said “what’s a pancreas? And why are you talking to me? I can’t talk to stangers…especially about my pancreas.”). I don’t know what a pancreas does, but I’m sure that it’s nothing compared to what Mazinga does. Can a pancreas repell alien hordes of blue creatures intent on destroying earth? I think not. Can a pancreas shoot missles out of its fingers? Well, actually, a pancreas is so pathetic that it doesn't even have fingers, so there you go.

Even today, I love Mazinga. If you asked me to list my top 10 favorite things ever, Mazinga would come in at number three. My list would look like this:

So, I wrote the letter, gave it to my teacher and a few weeks later Santa wrote back. He said “I will try to get you your toy” and “leave some carrots out for Rudolph”. My toy? Why didn’t he say "Mazinga"? Did he not know what it was? This didn’t sound good. It got worse when I discovered that my brother too had requested a Mazinga toy. Although he was my parent’s favorite, I was sure he wouldn’t be Santa’s favorite. Santa hates bad people and he sees everything. He HAD to have seen all the times that my brother beat me mercilessly—sometimes with his fists, sometimes with the nearest household object within reach, and sometimes by grabbing my wrists and beating me with my own fists. Asshole! Santa hates assholes, I was sure of it.

I told my mom to leave some carrots for Rudolph, but she forgot. When I woke up the next morning I was furious at her, but I hoped that Santa would forgive me. After all, it was only a couple of carrots, and they weren’t even for him; they were for Rudolph the Reindeer, and every one knows reindeer are like big dogs and they probably don’t even eat carrots, right? Then I opened the gift wrapping and I saw that I hadn’t gotten Mazinga. He gave me Raideen, another of the Shogun Warriors, and gave Mazinga to my brother.

This Santa was not only vengeful and petty, but cruel as well. I offered to trade Raideen for Mazinga, but my brother knew better. He said “fuck you.” Yes. Fuck me, indeed. And fuck you, Santa. For the rest of my childhood I saw my brother play with Mazinga and go on imaginary space adventures with it, while I was stuck with Raideen. I made the most of it, though. When Mazinga and Raideen fought, my robot had a flying fist that was actually capable of toppling Mazinga. To make mysef feel better about having Raideen instead of Mazinga, I would make Raideen defeat Mazinga every time, even if I had to kick it. This ritual would be followed by the ritual Shogun Warriors beating that my brother administered. Sometimes he would grab the 24” plastic Mazinga and beat me in the head with it. Someimes he would rip Raideen out my hands and beat me in the head with it. Sometimes he would grab some frozen ice pops and beat me in the head with them. Sometimes it would be a lamp...or a shoe...or gallon of milk...you get the picture.

A few years later when I was in sixth grade we were given letters from the first and second graders and our assignment was to write back to them…as Santa. As Santa? W.T.F? Confusion ensued in my fragile little mind. I asked my brother about this and he did what he always did when I asked him a question. He told me to “shut the fuck up” and grabbed the heaviest thing within reach and beat me in the face with it. This time, ironically, the nearest heavy object was the Mazinga robot. When I regained consciousness, I realized that there was no Santa. That in a way, we were all Santa. Except my brother, because Santa is not an asshole.

Anyway, I got some kid who wanted an Atari, or Nintendo, or whatever. The kid next to me got one from a kid whose mom died and he wanted Santa to bring her back. He showed it to the teacher and she took the letter away and gave him one from a girl who wanted Barbies. Yeah…that’s probably easier to write for a kid. Anyway, my letter went something like this.

Thanks for your letter. Santa enjoys reading letters from Children. It’s much more fun than hearing Mrs. Claus tell me about her day. That woman just won’t quit flapping her yap. Don’t ever get married. Ho Ho ho!!! I don’t have my list with me, but if you’ve been a good boy, I’ll try to get your toy for you. It won’t be easy for me though. You probably don’t know much about electronics, so let me just say that getting midgets to make complex electronics using hand tools designed for woodworking is no easy task. But I’ll try because I’m Santa, and it will give me an excuse to spend more time away from Mrs. Claus and her nagging.

Anyway, try to leave a carrot out for Rudolph. He likes those. But if you forget, I won’t hold it against you. Santa is forgiving and loves you unconditionally, unlike your parents, who probably favor your older siblings or your teachers who are only working here because this is the only job they could get with a degree from that party school that pretends it’s a real college. Ho Ho Ho!!!

The teacher later called me to front of the class and informed me that I mis-spelled “unconditionally” and that Mississippi Valley State is, in fact, a real college.

Coming Soon: Part 3 (where I chase my nephew with a severed pigs head (no, really))

Because I am such a dork, I found the Mazinga Toy HERE. Note missles stored on the legs, that load into Mazinga's fingerz for firing. The little airplane in his head is detachable.


And HERE is Raideen. The fist with the axe shoots out, and he can launch little attack planes from his chest.

Posted by HomeImprovementNinja at 11:06 PM

I hasten to say that the spelling of "armour" with a "u" is universal to the English speaking world rather than being purely British. "Armor" without the "u" is used by people who speak American. I, however, am fluent in both which is no mean feat I can assure you. You can thank Mr Webster and your crap-ass über nationalist spelling board for that one.

I wonder if Mr Webster included "crap-ass" in his dictionary...

That is hysterisad. I never believed in Santa and thought my Jewish parents were delusional for telling me he existed. He's not real...unlike the tooth fairy, who actually left me cold, hard cash under my pillow.

Santa always gave me what I asked for. But I cried like a spoiled brat anyway. I called it "Here's the angst you're going to eventually cause me, parents, back at you before you can give me a hernia. Thanks!"

This was a sad, sad tale.

E, I thought spelling in American was easy. Just re-set your spell checker.

AJT: I see your point. Santa's okay, but I'd like him better if he paid me cash too.

mg: I was shooting for a heartwarming tale of redemption and forgiveness, but whatevs.

I asked Santa for Megatron, and got a stinking Go-Bot.

I'm laughing @ brando's comment, because that REALLY had to suck. Go-bots were like the low-rent, shitty stepchildren of the Transformers

Thanks for commenting on my site. I'll be back for sure.

This is the funniest thing ever. Question: is "Mazinga" an anagram for "Amazing?" I mean, he is pretty damn cool....

Across The River said...

Is this the same Santa from Part 1? Because I guess you should just be happy that he gave you Raideen instead of killing you.

Hustleman: Thanks. I think va-jay-jays are at the top of most guy's (and some women's) lists.

Pugcrawler: Mazinga rocks. The fact that the letters spell amazing is just further proof of its awesomeness.

Across The River: Santa has softened his stance in the past couple of centuries.

This story was too cute. That Mazinga robot does look pretty kick-ass.