Well, I’m going to add to my list of mad skillz. It turns out that I have so many of them that sometimes I don’t even know that I have them until I test myself and find out. In that way, mad skillz are like Chlamydia. They exhibit no symptoms until tested.

Next week I’ll talk about my newly acquired skillz with concrete cinder blocks and stucco, but this week we’ll be talking about my toy crane skillz.

You see, it’s like this: In ye olde days there were certain rites of passage that separated the men of the tribe from the boys. Sometimes you would go into the woods and kill a bear with a sharpened stick to complete your passage into manhood, other times you might be required to circumcise yourself using only coconut shards. If those primitive tribes had poseessed modern technology, they would separate those worthy of joining the hunting party from the girly men with the ultimate test of manhood—the toy crane.

I know that some people (i.e. people who are not real men) think that the toy crane is rigged and that it’s impossible to get a stuffed animal or ugly baseball hat no matter how many times you play it. Laydeez, have you ever been out on a date and suspected that the guy with you wasn’t a real man because he couldn’t work the toy crane, but convinced yourself that he might be datable, only to later discover that he is just as incompetent with the female control panel as his is with the esoteric and capricious toy crane. See, ladies and gentlemen, the toy crane is the alpha and the omega of manhood. It is the method by which real manhood is based.

I know that some people think that the real measure of a man is how kind and giving he is to others…excuse me, I don’t mean to laugh at people who think that. Other people think that manhood is determined by the size of a man’s, errrr, manhood; how much money he makes or how fast a car he drives (usually, the smaller the manhood, the faster the car).

But I am here to tell you that it’s not. Ladies, the only two ways to tell if you are dating a real man is by his ability to lay hardwood flooring and his ability to work the toy crane. 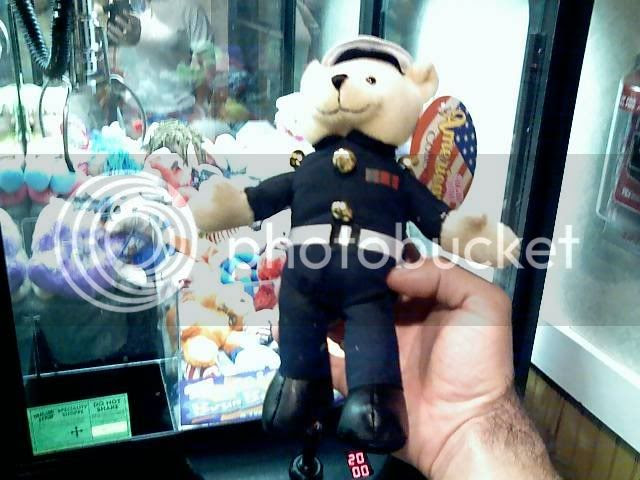 Posted by HomeImprovementNinja at 3:02 AM

That's awesome. You're the first person I've ever known to be able to do that. And as for Comcast, don't they know about your mad blogging skillz and how their bad name keeps getting muddied in the Express courtesy of yourself?

Don't switch to RCN though. Things will not improve. RCN also stinks.

This is driving me crazy. Let's fix it already.

The chances that your hardware is damaged are very low.

More likely, your network settings may have been inadvertently messed up. In the System Preferences select the panel called "Network." Create a new Location and then use the "Assist Me..." button to set up a fresh connection.

Buying the book was a good move, but you can't call yourself a Ninja until you've studied it.

And why is it that you've not been snatched up by the first available woman? I had no idea that a man with that kind of talent lived in my neighborhood.

It gives me hope.

Mad skills are like chlymadia? You are soooo not right!

E: I mad an appt with Apple today, I'll see what they say.

cpday: I'm trying, but my skillz are useless against the machine.

velvet: well, metaphors are not my strong suit.

Hey man, did you know that everytime you post it's showing like 7pm instead of 7am? May want to fix your clock :P

That's a good skill all right, but I wouldn't start or end ANY sentence with "it's like Chlamydia..."

Other things to avoid:
"it's like kicking puppies"
"more fun than stalking on myspace"
"easier than avoiding a paternity test"

Does that mean that you have mad skillz with the female control panel, too? Just askin'.

<< I'm trying, but my skillz are useless AGAINST the machine.>>

Observe, Grasshopper... You must go WITH the machine. Like a puppy, Comcast will follow because it needs you.