Well, the Comcast guy came and still no internet. He came without his laptop so basically he just stared at my computer for a while, went outside to look for the cable that comes into the house, then called to set up yet another appointment for Monday. For those of you keeping count, that will be appointment number 4. Thanks, Comcast. I really appreciate having to take 4 fvcking days off work just so that I can get the service that I paid for and which, you claim, you're in business to provide.

It took a while for the Comcast guy to set up the appointment because--you guessed it---their computers were down. These people at Comcast are about as organized as a monkey shit fight at the zoo. 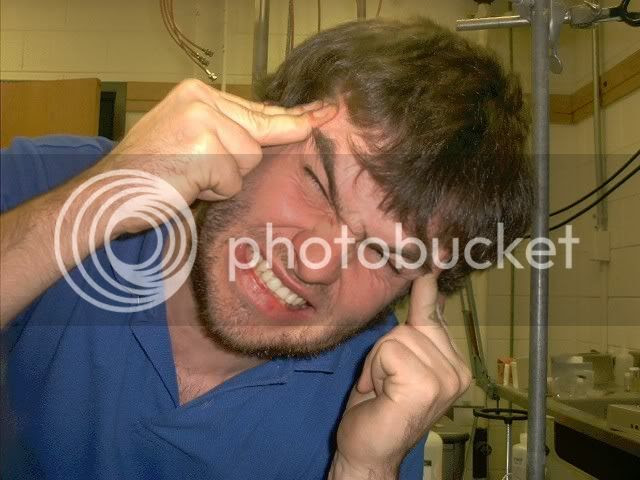 So the appointment is set up for Monday. I called tech support as the Comcast guy suggested (don't ask me whey he couldn't do it while he was here). And the Phone Monkey told me something that makes me hate Comcast even more. She said they couldn't find the IP address on my computer and that she didn't know how to fix it because Apple Doesn't support Comcast's software so they might not be able to fix it on monday...because of those bastards at Apple.

Now you all know I love me some Apple. If I had to pin the blame on someone and my choices were Apple (whose service has always ranged from Good to Great) or Comcast (whose service has always ranged from Mediocre to Pathetic) do you really think I’ll lay the blame on Apple. Especially since the woman who is calling me, is calling me from a place that can’t keep their own computers (which run on Windows, I’m sure) running.

I’ll let you internets know what happens on Monday, but since the last few Comcast techs have looked at my iMac like it was an Alien Corpse from a UFO wreckage, I am not really hopeful.
Posted by HomeImprovementNinja at 7:52 AM

Two words: verizon fios. They are more expensive --$44 a month -- but they NEVER go out. And when I call about some little glitch, their service is great. I work from a Mac so no problems there.

Also, did you see this video circulating the web: http://www.youtube.com/watch?v=ufo9p1O9iAQ&search=comcast

This problem most likely does NOT require a visit for Comcast. Are you game for trying some Tech Ninja skills?
I hate to sound geeky, BUT... are you connecting the Mac directly to the cable modem or are you using a router? The router is highly recommended and can be had for less than $20.

With the router installed there is no issue regarding the Mac's IP (not that there was one).

C'mon, we don't need no stinkin' Comcast. We can fix this ourselves.

Yeah, CPDay's right on. You should get a router. I have a wireless router and a Mac and there's no problems there.

But there still shouldn't be any problems connecting a Mac and Comcast, so those Comcastholes don't know what they're talking about. When my Comcast got set up, they plugged right on into my iBook and set it up just fine. So unless Comcast's technology has regressed in two years (knowing them, it's possible), they shouldn't have a problem with Macs.

OK, have no idea if this will help but I had my own personal hell experience with a Mac/Cablevision interface clash. One day everything worked, the next I had cable but no internet. The phone guys had less tech skillz than me so that was fun!
The problem turned out to be that while Cablevision was updating their security system they failed to allocate me, poor Mac user, a password. It had to be reset by the Systems Administrator at Cablevision. Once that was done I got my internet back.
Of course Systems admininstrators only work Mon-Fri 9-4. Bastards.

Not to be a smartass, but:

I'm only saying this because I care - there's a lot of decaffeinated brands on the market that are just as tasty as the real thing. - Real Genius

Seriously, though - You have my sympathies. Wish I could be of more help...

Another comment: Both Comcast and Verizon insist that you must install their "software" using their install disk. Nonsense. They want you to use their disks so that endless unneeded crap (including *@# Windows spyware that doesn't work on your Mac) ends up installed on your system.

You have a Mac, so you absolutely DO NOT need their "security ware." You might want their "entertainment" crap, but I doubt it.

The Comcast tech saw my installation and realized that he was dealing with a pro. He was good enough to just take down the MAC (hardware Media Access Control) address of my router, left a copy of my intial sign-on info, complimented my network installation and left. It all took about 15 minutes. I never opened the Comcast install CD-ROM.

I did a Verizon DSL install last week up in Albany. Verizon wants to do a DSL installation without ever committing a man-minute of tech manpower. They ship you the DSL modem, the modem and the *@# CD-ROM. The phone techs claim to be ignorant of the sign-on process and say (or they read the line) "IT CAN ONLY BE DONE BY RUNNING THE CD-ROM INSTALLER." As expected, it installed all kinds of junk that I promptly trashed. However Verizon DSL really works and is only $14.95/mo.

At least they mentioned you in the Express again. You're everywhere I go, Ninja. How do you do it?

The IP address is assigned to the Cable modem and not your Mac, Your Mac gets another "internal" IP address like 192.168.1.1 which is always internal. Make sure the Mac's DHCP (obtain address automatically ) is enabled (it should, it’s a Mac) , and you’re good to go (insert annoying hand twirl). Last week a friend’s powerbook had network problems. He brought it over and interestingly his Mac wouldn’t connect to my router with one of my cables that was just working fine on my PC that I unplugged it from. I got another cable and it was fine. Go Figure. Also I’ve seen these things get stuck. Did you powerdown BOTH the Cable modem and Mac?? Plug the Cable modem back in first and wait for the internet light to start blinking, then startup the Mac. Good luck I have a love hate relationship with TWC. I love to hate them.

Another shout out to Verizon FIOS. That shit is da bomb. Though it may not be available everywhere, I'm pretty sure you wouuld have the service where you are.


Comcast, IMPO, ranks right down there with AOhell for pissing off customers.

Bonk at Home is absolutely right. Why would Comcast need to see current IP addresses? Comcast uses DHCP for the WAN side (but watch out, Verizon uses PPPoE), so they are assigning the IP to your modem and the modem (or modem then router)is assigning LAN side IP addresses to your computer(s). Could it be that Comcast was failing to read the cable modem hardware address (i.e. Media Access Control-MAC address)? I know that Comcast wants to know this when they install. Perhaps this is a clue that Comcast suspects that the modem is shot.

Death to both Comcast and Cox! Their shoddy service sucks to no end. I think they get sick pleasure in denying innocent folks our Comedy Central and DSL addictions.

Contrary to popular belief, monkey-shit fights are very organized. The head male monkey must be the one to start, and then with his permission, others may join in the order of their ranks in the herd. Or whatever you call a gaggle of monkeys. Although I don't think "gaggle" is it either.

When this post came up on my screen, I burst out laughing. Sorry. It is just such a funny picture.

As for Comcast, why is it that they can never seem to be disorganized about remembering that I owe them money?

angst on the outskirts said...

Comcast fucking sucks... they screwed my credit up. Feel free to read about it on my blog if you are bored.

Let's kill them. Seriously. I'll use my kung fu skills. We'll storm their HQ in D.C. and take down the organization, Fight Club style.

anon: I have no idea what that is, but my friend says that it's awesome but not available in DC.

cpd and reid: I don't know what a router is (I connect through the cable modem) but I think I'll make a trek to the Apple store this weekend.

modernmama: I called tech support and they were no help. I'm cancelling everything, i think.

cp: Yeah, I don't need security because no one bothers to write viruses for Macs. Mac users are benevolent.

MA: Thanks. I had no idea it was in there. My friend Rebel Yell saved me a copy though.

BAH: The DCHP thing is blank. I'll try you're suggestion though.

anon: nothing is worse than AOL.

coffee lady: Cable companies are evil. I would say more, but I don't want to get disbarred.

liberalbanana: why do you know so much about monkey shit fights? Is there something you want to share with us?


Angst On The Outskirts: Comcast has a bad rep for service, and it's well deserved.

Twoste: You do what you have to do. I'm maintaining plausible deniability.

Raincouver: I'm sure they pay their people well to oppress us.

Why don't you just switch to Verizon? They are incompetent but less so than Comcast.

Sorry. I didn't mean to laugh at your expense. I will cry now.;)

Anonymous said...
This comment has been removed by a blog administrator.
9:29 PM