A Carport by Any Other Name

Okay, so as promised, here is an actual home improvement project. First some background. If you remember back to the Florida Trip Parts 1, 2 and 3, you’ll remember that my Dad, brother and I decided to buy a couple of houses in Florida, fix them up and flip them. This was one of them. 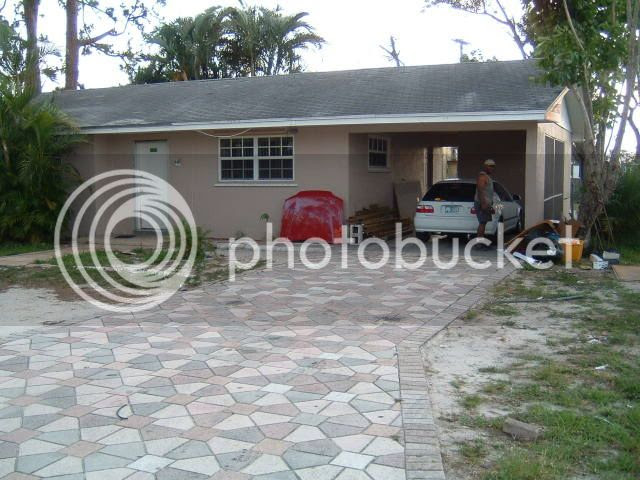 This was a 2BR one bath house with a carport. The plan is to close off the carport and turn it into a 3BR house (with one or two baths). Step one would be to close off the side with cinderblocks. Since carports don’t add any value to a house, but an extra bedroom does, this should make us some money, which I can plow into my ninja stock picks, and make some really obscene amounts of cash, which I can then use to raise an army and conquer the world. Well, not the whole world, only the parts that don’t suck. Anyway, here’s how you close off a carport with cinderblocks (assuming you are awesome). 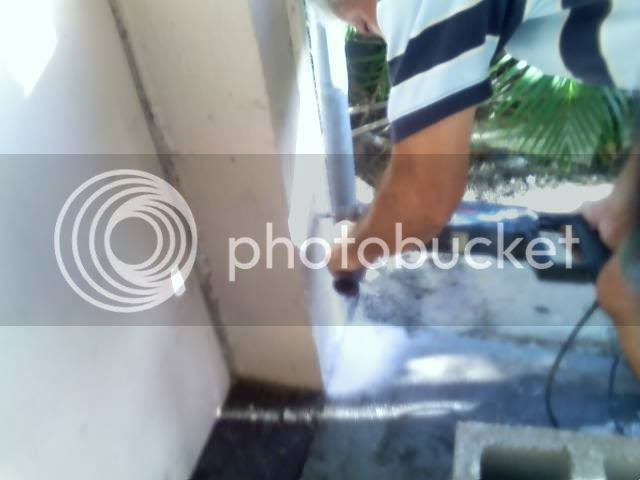 First you have to drill some holes in the existing concrete and stick some re-bar rods in the concrete. This will tie the new cinderblocks to the existing structure and keep the structure from collapsing in a hurricane and having the family of the dead people sue you. 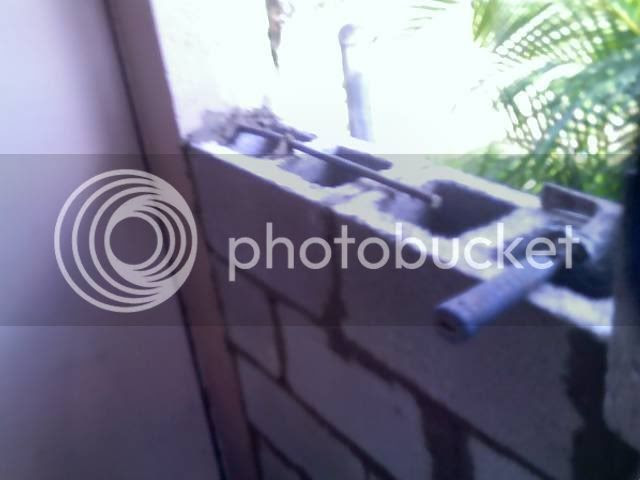 Step B: Start by sticking the rebar in the walls and in the wall every couple of rows. Like this.


Before we go further, I’ll be the first to admit that my brother is stronger than me. Doing this type of work requires moving around a bunch of 90lb bags of cement and cinderblocks. He can carry two bags at a time with the same ease that most people can carry around some pillows or their dry cleaning. He tosses cinderblocks around like they are loaves of bread. I, on the other hand, AM capable of lifting huge bags of cement, but not without making noises that you might confuse with childbirth. Since I am aware of that obvious fact, it need not be mentioned. But with each painful grunt that I utter I hear my brother making comments like “fcuking pussy” or “pathetic.” If my brother wasn’t the kind of person who fights off gun wielding muggers (yes, he’s done that…twice) I would seriously consider kicking his ass. Or maybe hitting him with something while he’s asleep, then running like hell.

Anyway, for this project we hired a day laborer to help us out since the work is heavy, my dad is in his sixties, and I am, apparently, a fcuking pussy. He had a huge mustache, so I assumed he was Guatemalan, but this guy was actually Pakistani. I found this out when I tried to ask him something in Spanish and he looked at me the way I look at someone when he asks me a question about implied volatility in an option pricing model. Yeah, that look.

Ninja: Pakistani? How do you know he’s not Al Qaeeda? I don’t want to give this guy money, have him buy a bomb and blow up Washington, and have me die from a bomb that I paid for. That would be fcuked up. 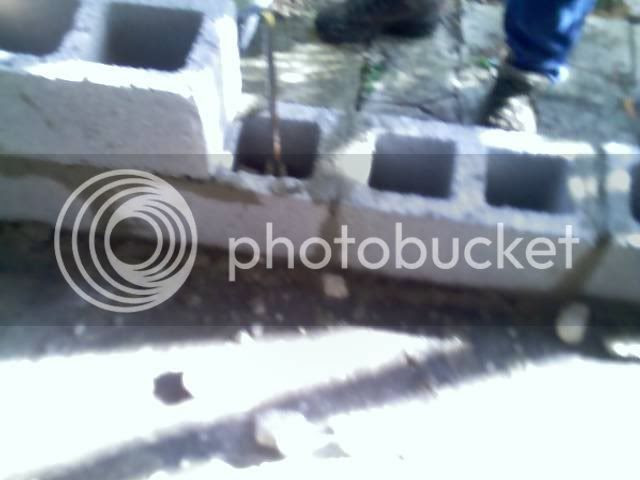 You need to drill into the ground too every couple of feet or less. Add the rebar, then fill in the holes with cement.

You only need to fill the rebar holes with cement. You don’t need to fill all the holes in the cinderblock with cement unless you are building a second story on top of it.


After you get to the top (which you might have to finish with those half-cinder blocks), then you start the stucco over the cinder blocks so that it matches with the existing stucco/cement wall. 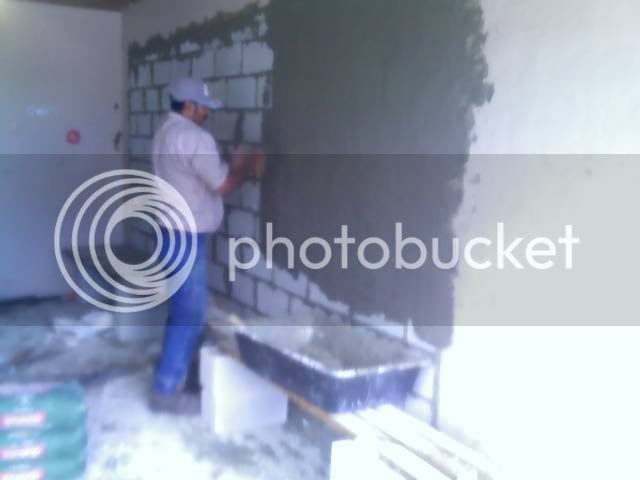 This is what it looks like when you start Stucco-ing. A word of advice: The cement companies are making the Stucco crappier every year. Nowadays it’s mostly sand. So throw a shovel or two of Portland cement in the stucco mix so that it sticks to the wall better.

This is what it looks like when you get higher. See, use the rebar rods every couple of rows to tie it into the structure. Don’t skimp on this. Rebar only costs a dollar a piece, but paying damages for a dead person who’s house collapsed on them is really expensive. Even if the person was really old or unemployed. 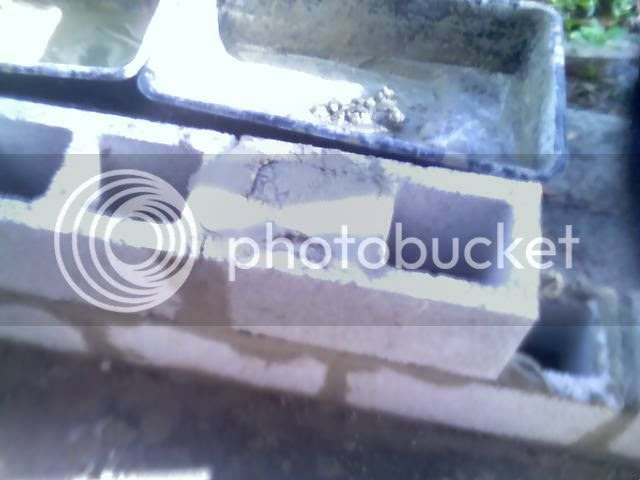 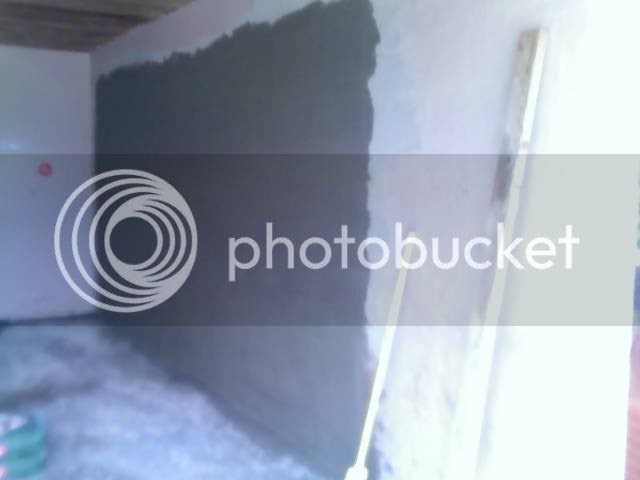 This is what the finished wall should look like. Then you paint it and you're almost done.

Because this part of Florida has very sandy soil, closing off the front of the carport requires that you dig down 18" and pour concrete footers that deep. Then the building inspector looks at it, and (hopefully) approves it. We got permits to make all this legit (and to keep from bieng sued if someone dies on us) but scheduling that stuff and going down to city hall takes a lot of time.

We didn't have time to do the front before I left, but I asked them to take pics of closing off the front so I can show you imaginary people. I'd like a pic of the building inspector taking a bribe (they all do it) but I don't he'd be up for it.

Posted by HomeImprovementNinja at 2:43 AM

And make sure you cap the rebar. I saw this one case where this guy got impaled on exposed rebar and... *brrr* Well, let me say this. You would really wince since you are a man.

I would like to hear about your making a television show in which you do projects and then do a Mystery Science Theater voice over in which you make fun of your brother from a safe distance away.

I did the whole "thought they were Hispanic, but really they were Pakistani" thing once. I swear, this whole family looked Hispanic to me. They ran a hotel in NC. I don't really think of small-town NC as a place with a lot of Pakistanis. And I really thought they were Hispanic. It's not like I just glanced at them for a second. No, we stayed there the entire weekend. My bf told me the last day we were there and then proceeded to mock me for entirely too long.

My former room mate and Pakistani bestest friend in the whole wide world has such a nice Latin tone to his skin that, when he goes home to Karachi, shop vendors speak to him in English because they think he's South American.
Seen it with my own two brown eyes.

And the wall looked cool.
You're so handy.