Schadenfreude and the Sudanese Guy

Okay, so I got my pics working and here is the update on the sudanese guy. First, some random, but surpisingly relevant thoughts on Germans.

Only the Germans could come up with a word like "schadenfreude". For those of you who don't sprechen sie any deutchse, schadenfreude is the joy you get from seeing something bad happen to someone you dislike. You know, when they get their comeupppance. That feeling you got when you saw Princess Lea strangled Jabba the Hut in Empire Strikes Back, the germans have a word for that. Gotta love those silly krauts.

In case you are wondering what my point is. I experienced this emotion last week (because something bad happened to someone I dislike, not just because I'm part german). If you'll remember the problem I'm having with my Sudanese neighbor 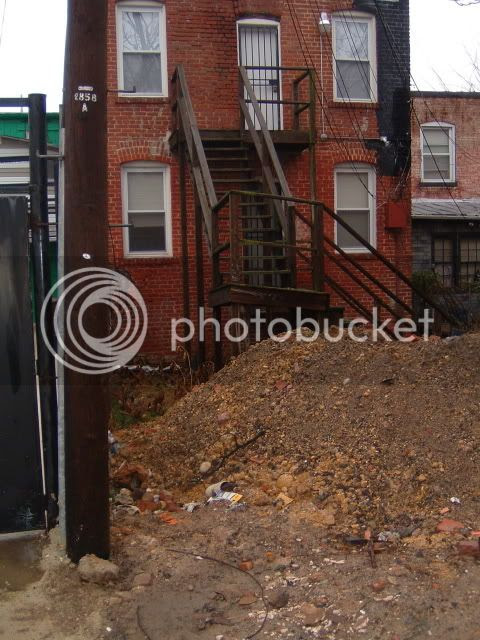 You know he's got a bunch of dirt in his driveway, like this which makes it harder to use my driveway, especially when it encourages other illegal dumpers... 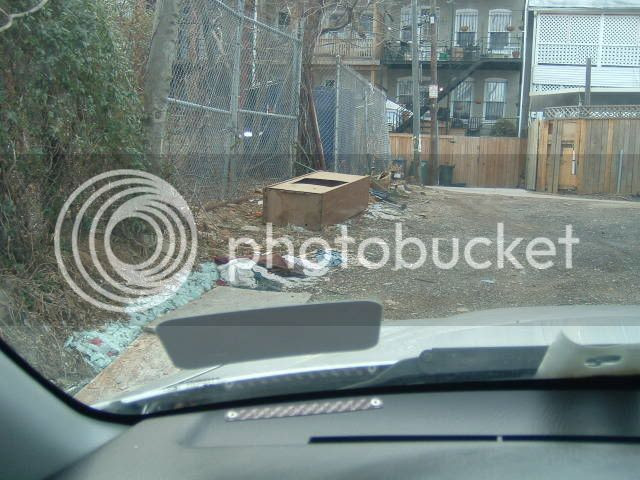 like this. (some dumped a couple of mattresses and boxpsrings after this, but I didn't take a pic because I am lazy).

So, you'll undertsand why I felt good when a tree fell on his house and knocked out his cable and phone lines. It didn't knock down his whole house, which would've made it more enjoyable, but still, that is pretty good. 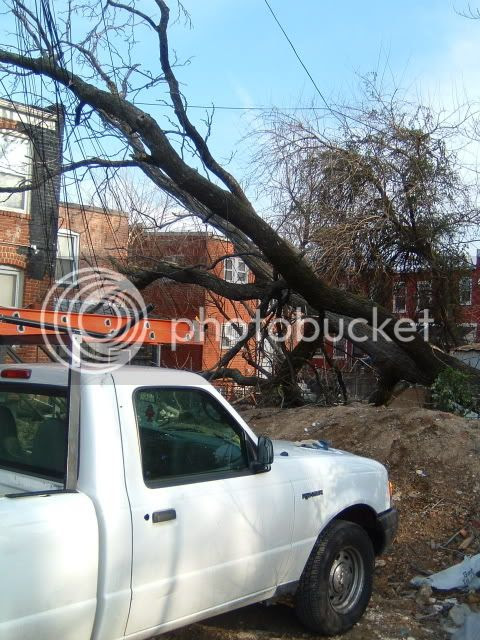 I think this is clearly a sign that I am in the right on this one. My neighbor claims that if the dirt wasn't there, the tree would've gone through the back of the guy's house so maybe that's a sign that God likes the dirt there. That's just silly.

He obviously wanted to punish the Sudanese guy so he took away his ability to watch this season's American Idol and if that guy doesn't get his act together, he will ratchet it up more and more until we have biblical plagues and such. The reason he didn't knock the house down first is because there are innocent Sudanese refugees renting rooms from the guy so it's his way of saying that "God's not down with Genocide, man."

By the way, a lot of Sudanese are polytheistic animists, not good catholics, like normal people. This could also be a sign that my Catholic Deity is more powerful than the silly rocks they pray to, but I won't go there.

(Please spare me the hate mail, with all the tuition that my parents paid to send me to Catholic school, I am entitled to make occassional jokes about religion...it's been pre-paid).
Posted by HomeImprovementNinja at 1:20 PM

wow... ha! The wheels of the karma bus go round and round...

Why has the city allowed this? I mean, if he was planning on using it within a certain length of time I could understand it but really. It looks like he has a teeny tiny backyard and it is now just a huge pile of dirt that when it rains will wash into the city sewer system. I am really surprised the city is letting your neighbor get away with it.

siryn: when I saw that, the first thing that popped into my mind was "Karma, baby!".

patricia: this city is notoriously slow and incompetent. I think i'll get organized and start calling them every, say, monday about it and see if they do something.

By the way...seee, the pics were necessary. No one would believe an effing tree fell on that asshat's house if I didn' have a pic.

LOL...... as a graduate of a catholic grade school, I feel your pain and wish you success on your continued recovery (just kidding ;-))

This post did give me a good laugh, and even though you have a "trouble" neighbor, it's good that you can still joke about it.

Dude, what is up with the DIRT?! Seriously, is he planning on actually using it for something?

Seems like if it rains, you might have a mudslide and, if it goes through his house, you could then claim some plague or another. Surely the city wants to avoid plagues, yes?

"Schadenfreude" reminds me of how one of my philosophy of education professors asserted that when the tower of Babel fell and all the world's languages were created he was certain that German came from 2 three year olds, who's only method of make new words was combining together smaller words.
I like to be able to touch on both the language and the religious points of your post, and share your joy as well!

Glad you got the photo programs up and running!

If you're in Ward 1, Jim Graham's office did wonders for me when we had that terrible, terrible problem wherein DC Public Works buracracy screwed us so no one picked up our trash for six weeks after we moved in. Once I got ahold of a dude in Graham's office, it was picked up in a day. Let me know if you want the guy's name who I talked to.

I love the word "asshat".

bromius, thanks. I think Catholic School survivors, like Vietnam POWs have a post-traumatic pysche that only other catholics can understand.

christiane, if you go back to previous posts you'll see that he was digging the crawlspace deeper to turn it into a basement. He stopped paying the contractor, so the contractor took his dumpster...but left the dirt. It's been there since.

mike: yes, a lot of german words are like that. the word for glove is "Hand Shoe" and schadenfreude means, literally, "Damage Joy". They make up for the lack of words with an abundance of grammar rules though.

Heather, yeah, please send that to me. Thanks.

El Guapo: How could anyone not love a word like "asshat"? It's like saying you don't love a pupusa. You could say it...but who would believe it?

As for you, HIN, have you seen V for Vendetta? I won't see it but it sounds like a schadenfreude filled movie.

I hope he remembered to pull the car out before that dirt came along!

Ninja
There's an old Chinese saying"If you wait by the river long enough the body of your enemy will float by" Perhaps you've heard it.

Reya, I haven't seen it yet, but I definitely want to. Natalie Portman (yes, please!) as a libertarian fighting the state. How could I miss it!

RC, I don't think the guy even lives there. I think he just uses the place to exploit his countrymen.

karen, I haven't heard that one. Although I like the imagery there, I wonder how his body would end up in a chinese river.

You could contact DCRA if you think that there are too many refugees living in the house. Check and see if he has an occupancy thingy. He's supposed to have some other permits or whatever to be a landlord (like any pays attention to those things). Unfortunately it means the refugees have to find new homes. If you do contact DCRA do it before or after the flood of DC interns.
Also Southern Sudan is filled with Christians being killed, raped, forced to convert by their northern oppessors, and some anamists.

Home Improvement said that i hope ur going to build ur home with good homeimprovements.