This year I thought for sure I would win best costume. My friend had her annual Halloween party at her huge (7 Bedroom) house out in Fairfax county. Seven Bedrooms? Wow, I'm in the wrong business. 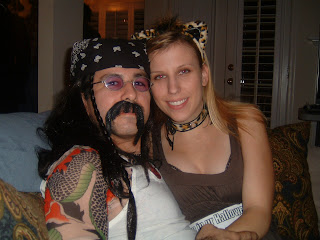 Here's a picture of me and the girlfriend, who went as a LOL Cat. The people who knew what a LOL Cat was thought it was great, but apparently not everyone reads LOL Cats. Most of the people had no idea what that website was.

I felt bad for the people that never saw that website. It was like finding out that you were the only one who grew up with a pony and that other people spent their childhoods working in the coal mines.


But alas, I did not win first place. The prize went to last year's defending champ. He came as Michael Phelps and his wife was Michael Phelps' Mom. Funniest line of the of the evening: After Michael Phelps won, his mom takes the microphone and says "I'm just so proud of my son". Anyway, here is the winning costume: 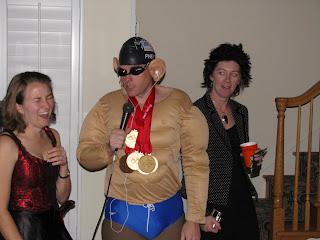 The big ears and iPod earbuds make the costume. 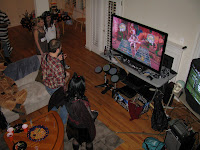 Afterwards, everyone kept getting drunk and playing Rockband. The end.
Posted by HomeImprovementNinja at 3:04 PM

Aren't those your real tattoos?
Nice girlfreind;looks good on you...

Nope...those are fake. It's a nylon/mesh shirt that has designs on it that look like tatts. And thanks, I dig her too :)

Ahhh... I wish I had actually done something for Halloween. Two years in a row that I have not been able to for work or travel.

By the way, the handlebar mustache is super hot in a totally white trash way.

Nice house,nice TV, where is the furniture?

Anonymous : it went towards the mortgage, I guess.


zandria : the best ones are always the handmade ones.