Well, I continue to search for things that I suck at, but I am so awesome that it's difficult to find anything. Let's add submission grappling to the list. But first...some background.

I started learning karate when I was about 12. Only it wasn’t just karate. The school was taught by an old school karate master and an old school judo and jiu jitsu master who thought that by combining grappling with punching and kicking, it would make you a more effective fighter. Although this sounds obvious to anyone who watches Ultimate Fighting, in the 1980s it was really radical thinking. It was like saying that Cold War would end without a shot fired, or that women in p0rn would one day ditch their crotch afros and go completely bald. Crazy talk!

Eventually, I got a few months more Judo training from this guy. I stopped when I got a concussion. But even then I realized what a useful skill ground fighting was. If you could hurt someone that bad by accident, imagine what you could if you were doing it on purpose. If something existed at the time that had let you do more grappling, with less crazy throwing-people-on-their-heads moves, I probably would've done it. Not that I mind throwing people on their heads, but in class you usually take turns doing stuff, and the part where I land on my head kinda sucks. Nowadays, there are a lot of jiu jitsu schools where you learn of lot of groundwork and not a lot of throws, but they weren't around in the 80s.

My training in grappling isn’t extensive, but what little I know has come in surprisingly handy over the years. A big drunk a-hole doesn’t think anything of punching a little guy in the face if he’s had a few beers and his girlfriend is checking me out, but alcohol makes it surprisingly easy to knock him off balance and he usually don’t fight very well after he falls face first into a bar stool or the floor.

I started training in jiu jitsu again recently. I do okay against the people in my class (even though I’m usually the smallest guy there), but I wasn’t sure if it’s just because I was eventually figuring out their weaknesses, so I wanted to enter into a tournament to see how I do against strangers.
Now, I have competed in karate tournaments (punching and kicking) but never in a jiu jitsu tournament. Grappling against someone who knows what they are doing is much different than some random drunk or crackhead.

I like training jiu jitsu because it’s a really good workout. If I go to the gym, it’s hard to stay motivated because lifting weights is really repetitive and bor

ing. But I have no motivation problem in jiu jitsu. It’s easy to stay focused and motivated when there is a fat guy with his knee on your chest trying to rip your arm out its socket or choke you unconscious.

So a couple of people in my class decide to go to a tournament "nearby". It turns out it was almost 3 hours away, which meant that I was going to have to wake up at 5am to get there. For some reason I thought the tournament was only a half an hour away. Geography is not my strong suit.

Me: Doesn't his truck have second gear?

Although it was kinda far, and although I didn't get down to the weight I wanted to, I decided to do it anyway. I ended up at the bottom of the 160-180 lb category, instead of the top of the 140-159 lb class. Which meant that a lot of those guys walk around at 200 lbs and they dropped weight to compete at 180 lbs. Not good for me, but whatever. I'll try anything once. I won't bore you with a play-by-play, but here's the pics that I have from the event. I competed in about 5 events. Some were with gi (uniform) and some were no-gi, they were in the novice division. 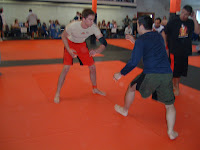 Here I am fighting for second place in the no-gi event. Sadly, I lost and got 3rd. This guy was a wrestler, and I hate fighting wrestlers.
I had a match right before this and I was dead tired. They only gave me 2 minutes to rest, then I was at it again. I had no gas left in my tank and this guy was good...and he fights dirty. He kept grinding his knuckles into my face and trachea when the ref couldn't see.


Here's the beginning of the fight. 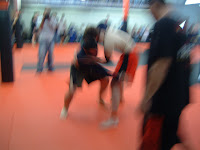 I move so fast that existing technology can't capture my movements. They make photo equipment that can capture a bullet in midair, but nothing is fast enough to catch me.

Long story short, eventually he got me in a RNC, and I defended it. He was clamped around my jaw, not my neck and it was uncomfortable, but I could have easilly held on 'till the end of the match. The thing was, that he was way ahead on points and I was out of gas. So if I held on for another minute, he would still win, and if I broke free, I had nothing left in the gas tank so he would win. So I tapped. 3rd place for me! Anyway, I'm not making excuses, he beat me fair and square and even if I was rested, he was really good and would've probably won.

It's hard not to get nervous when your sitting around waiting for your turn. I tried to keep my self psyched up by listening to my iPod while practicing my drills during my downtime. If you ever need some god psyche yourself up music, I suggest some NWA or some of this.


In a way, the best fight I had (even though I lost in the first round) was the open division. The open division takes balls to enter because, like the old school ultimate fighting, it's open to all weight classes. So you have to have to be really dumb....errrr, I mean brave to enter because you could be fighting someone who's 150 lbs heavier than you. 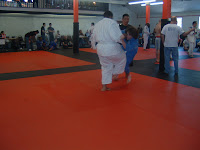 Which happened to my friend Cody. D'oh! 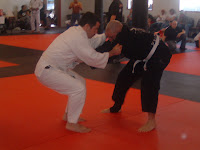 Here I am in the open division. This guy looked like ex-military (there were a lot of people rockin' USMC tattoos at the tournament).

This was my last fight of the day. At this point I was thinking "another fight? can't we all just get along?"


If I remember correctly, he shot for a single leg takedown and I sprawled out of it.
Here I 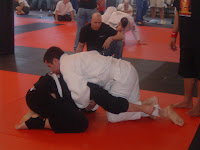 am starting apply my guillotine choke. I cranked this guys neck so hard that I thought I would rip his head clean off his body, but he was tough as nails. He wouldn't tap. Eventually, he got his neck free and got me in side control.

It went downhill from there. After several submission attempts and escapes, he tapped me out with about a minute left in the fight. He had me in an armbar, and although I started to stack him, I wasn't about to try to muscle out of it. I've got a mortgage to pay and getting my arm broken for a medal isn't worth it. 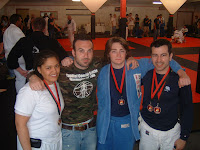 I've been on ibuprofen for a couple of days now and both my elbows are hyper-extended, but I got a cool anecdote, some medals (and blog post) out of it. 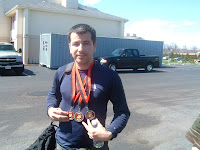 Here I am with 3 medals. I don't count the third, because for that event (over 30 years old, novice, 160-180lbs, gi) I won because no one else was in that weight class. I wasn't even going to pick up the medal, but I did because I wanted my school to get credit for the win.
So that one I won for being the right weight. Of course, when I tell this story to my grand kids, it will be for killing a lion with my bare hands.
Posted by HomeImprovementNinja at 10:38 AM

Congratulations. It looks dangerous, so I think I'll stick to Tae Bo.

nothing like the good ole' win by default. My favorite.

I kid, looks like a great day, way to go.

The Maiden Metallurgist: thanks.

zoom: to each his own.

are you gonna be in the olympics????
xoxo

Welcome back, and congratulations!

I think it's very cool that you take the time to be involved in this. I'm sure it takes a lot of time and dedication. :)

zandria: yes, but it's better than mindlessly lifting weights.

Congrats! This post was a little too GUY for me, though. Are you a rock climber, out of curiosity?

wow, cutey pa-tootie over here with your tight work out clothes, hahah im such a sucker for hispanic men.....it must be the miami upbringing....or just my.....culture hahhah

It looks so much more manlier than that em hem...gay shirt hahaha

"...that women in p0rn would one day ditch their crotch afros and go completely bald."

Can you believe that they had pubic hair wigs, called merkins, back in the 70s! We wouldnt use that shit now!

It doesnt matter what size you are, youre still a cutie!

Lisa: nope...why? what have you heard?

Lola Gets: awwww thanks.