Okay, here is the final Christmas post that I have been promising. I was in Florida visiting the ninja clan and getting new material for my blog and my therapist. My family was in rare form. Old feuds were rekindled, and new feuds were ignited...good times.

Anyway, my sister had bought a new house, 5 bedrooms, and I, my brother and dad were enlisted as free labor to do some stuff on it before she moved in. I didn't take many pictures, so that won't be discussed right now. The only thing that I will mention is that my younger half brother is completely useless when it comes to home improvement. He did nothing for the entire time when we were there, and when he finally did something (carrying a tool up the stairs), he dropped it, damaged the Pergo floor and made an extra hour of work for me and the ninja dad. Nice work, Sparky!!! Even my sister is better at home improvement than he is, and she has a uterus. I hope that the home improvement gene kicks in eventually because I would hate to think that a male who shares my genetic material is not a real man.

I know that some of the laydeez reading this are thinking that you don't have to know how to fix stuff to be a real man because their husbands can't fix things. But the only reason they think that is that they have never made it with a guy who can lay hardwood flooring. Jus' sayin'.

Anyway, between fixing stuff and getting dragged into family feuds, I went Christmas shopping. I found some interest things in the sunshine state, even if I didn't buy it. Like: 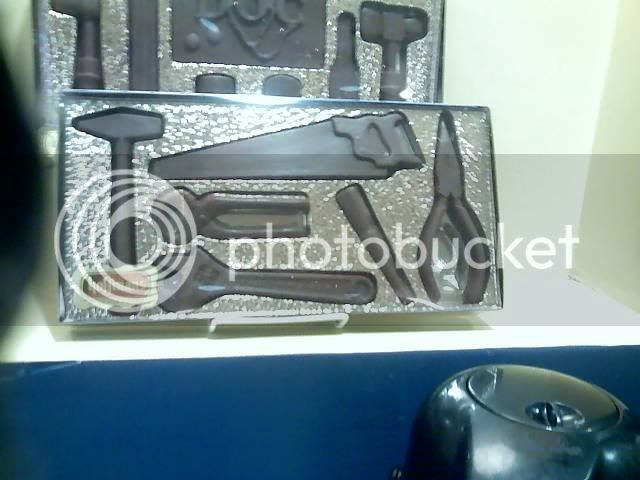 Chocolate tools!!! Very cool, but the last thing I would want to see is anything to do with Home Improvement. 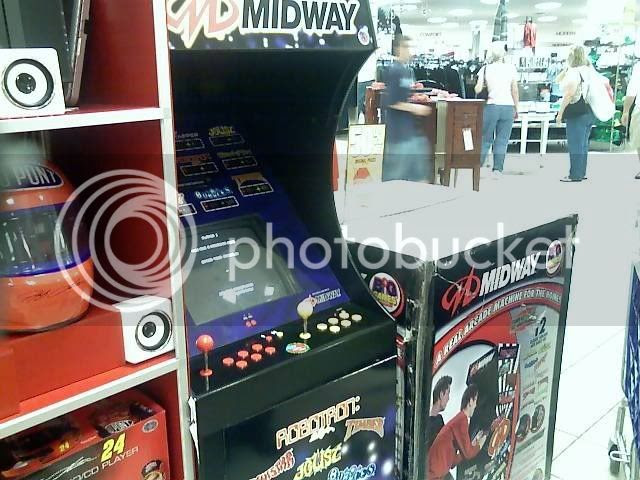 Games!!! Holy crap. This was at Target and was selling for only a couple of hundred bucks on clearance. If it was in DC I would've bought it. It had four classic video games in the same machine like Defender Robotron and Joust. My nephew laughed when he saw this because, compared to PS2 and some of the other new games which look like you are in a movie, the graphics suck, but this is part of my childhood. Part of my fcuked up, wasted childhood. I remember hearing that Stephen Spielberg had his own Tempest video game in his house and thinking that I would like to be rich enough someday to have a video game machine in my own house. And ironically, now, I am rich enough to have a video game machine in my own house. Maybe when I'm done with the ninja fortress I'll buy one of these these. You can get 5 of them for the price of a decent MacBook. I could have my own friggin' arcade...where all the games are free...Swwwweeeeeeeeeet!!!!

There were other interesting things at Target. For instance, you can get the entire Friends sitcom on DVD for $200. I know what you are thinking: "why would you pay $200 for something that is not even funny. " I wondered that also. But apparently some people like that show. "Could they BE any dumber?" And by buying the DVDs, they don't have to watch the episodes for free on TV. They can watch them anytime of the day or night. Apparently, if you think Friends is funny, you have a lot of time on your hands because none of your real friends will want to hang out with you.

So in my searching, I found the perfect gift for my nephew "Day Day". I found this little play tool chest and little battery-operated circular saw with little safety goggles (safety first!!!) because you are never too young too learn to fix stuff, or to be a real man...which is basically the same thing. 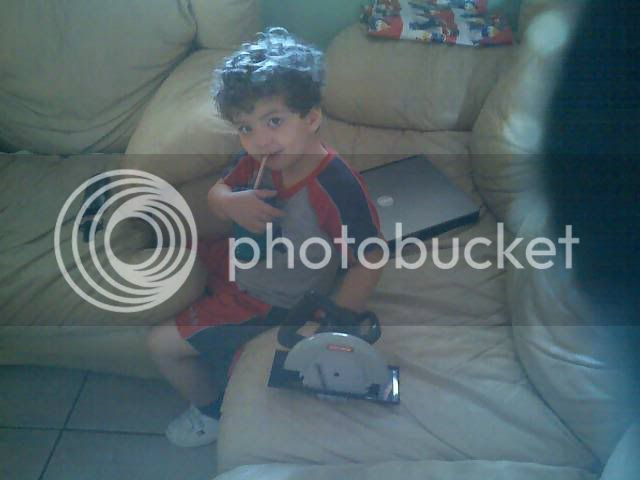 Day Day with the play circular saw. If he didn't have a sippy cup in his mouth, all you girls reading this would be All Up Ons, even thought he's not even old enough to unhook your bra.


Anyway, during the Christmas dinner at the Ninja family home is where the problem started. we had a big whole roasted suckling pig ("lechon") that was made for the occasion. But Day Day was freaked out by the head. So, since he hadn't suffered any childhood trauma yet, I thought it was time for him to know what it's like in the ninja clan. So I told him that it wouldn't hurt him and when he got close to it, I made the jowels move and made it fake-bark. 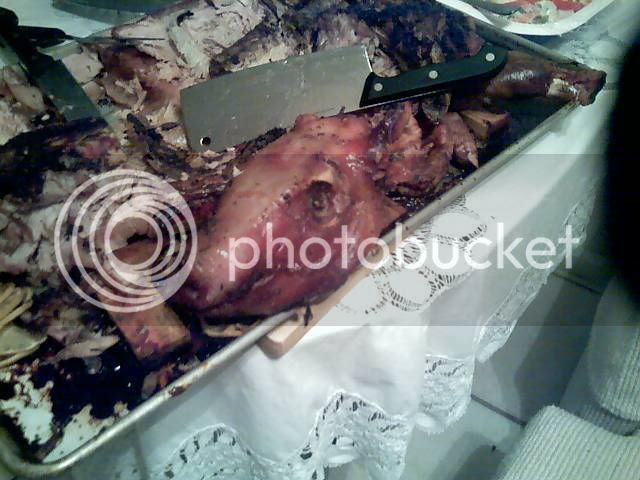 Okay here is a picture of the Pig's Head. Needless to say the kid was freaked and started crying. So I did what anyone in my family would've done to me if they were closest to the pig and I was his age: I grabbed the pigs head and started chasing him around the house with it and making barking noises. The kid was screaming like teen girl at a Ricky Martin concert.

Then my sister flips out on me, for no reason. No reason at all!!!

Sis: You asshole. Now the kid is gonna grow up fcuked up!

Ninja: So what, that's what therapy's for!

Sis: Not everyone in our family needs therapy.

Ninja: Ummm, did you grow up in the same family I did?

The kid was grabbing my sister's leg and bawling in a very un-ninja like fashion. My sister tried to make him feel better so she grabbed a cake knife and fake-stabbed me to death in front of him. (oh yeah, tell me again we don't all need therapy). 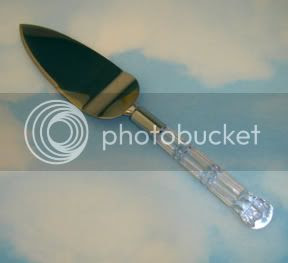 So I took a dive and pretended to die.

Ninja: See, Day Day, that's the message of Christmas...that if someone messes with your family, you cut them. That's the gift of the baby Jeebus.

So anyway, that's the story of how I chased my nephew around the house with a severed pigs head. Like I said, it's not as disturbing as it sounds. In fact, compared to stuff in my childhood, this is really pretty mild. If that kid ends up in Catholic School like I did, they will mess up his mind so bad that he won't even remember this. So I probably did him a favor...somehow.
Posted by HomeImprovementNinja at 2:52 AM

Oh my gaaawwddd. Let me tell you something. Now that I KNOW you are Cuban - I met my bf 5 years ago and when I went to the first Pig Roasted Cristmas thing at his house it was the worst experience of my life. Especilly since my bf's sister's husbandis a "ghetto cuban" he thought it would be funnier to see me squirm when he scraped out the pigs cooked eyes and ate them - while he sucked his fingers and laughed at me - i was puking my brains out.
Suffice to say that everyone had a ball with me.
I am freiking Nicaraguan - we dont cook live pigs n leave the head there - we dont like to look into the animals we eat and get drunk enough to have conversations with them while you eat thier tosted bodies .... Yuck.
To this day everyone in his family know to delicately put a napkin ontop of the pigs head when I am near. They dont want to see part deux of my pig experience.
I dont even eat the lechon anymore - and whats the deal with the Casaba? Wet yuca bread? I dont get that shit. I am Nica we eat warm toasted tortills god dammit!
Love you NINJA!
Sailor Moon!!1

That's some funny stuff! I've got a home improvement blog that I started a few months ago and I've struggled to get readers. In an effort to network with other home improvement folks I created a blogroll. If you're not familiar with a blogroll it's really just a simple way for similar blogs to link to each other and spread the word. If you're interested check it out at http://homeimprovementblogroll.blogspot.com

What a lovely Christmas scene!
--And that adorable nephew couldn't be cuter if you put wings on him and a sweater the colour of ripe persimmons.

Man....if some Norman Rockwell wannabe could somehow manage to capture that kind of hot dysfunctional Christmas action in a single painting, I'd totally buy it.

Next year, you should eat your nephew.

Just when I think you can't get wittier or more inventive, you chase your nephew around with pig's head. As an anonymous reviewer in the midst of a mid term paper, can I just thank you for reviving me? Thank you.

SAILOR MOON: Thanks, but I am not cuban. We just like eating dead things.

zulhai: I have no idea what persimmons are, but thanks.

You can call me, 'Sir': I don't think Norman Rockwell would paint that unless he was on a bad acid trip.

Anonymous: You're welcome. Next year I'll find something else to keep his future therapist gainfully employed.

Ninja: See, Day Day, that's the message of Christmas...that if someone messes with your family, you cut them. That's the gift of the baby Jeebus.

Is this going to be a game of guess the nationality? For the second chance I will guess Dominican and Puerto Rican - (im going with that because their islands...)

Looky Looky is the headlining story on MSN !!
http://realestate.msn.com/Improve/Article2.aspx?cp-documentid=3570837&GT1=9223

Its the way to stop being the landlord to mice/rats..

The mental picture of this whole scene - barking pig's head, chasing your nephew around the house, being fake-stabbed to death by a cake knife - was priceless.