A Tale of Two Nickels.

I’ve been bothering a friend of mine for several weeks about my nickel. Now, you might be thinking “I know there’s a recession, ninjaman, but bugging your friend for weeks over a nickel? Cheapass!” Or you could be thinking “I don’t think the Starbucks baristas like me”. Or possibly “Is it laundry day again? I thought I had at least one more pair of underwear.” But anyway, the reason I want THAT particular nickel back is because it’s my lucky nickel.

Answer to your next Question: Yes, I do have a lucky nickel.

Answer to your follow up Question: Yes, I really am that weird. 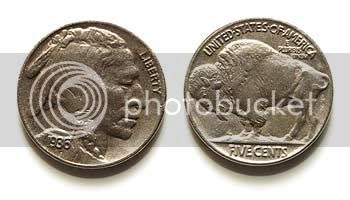 My lucky nickel looks a lot like this, except mine has powerful Indian Mojo comin' out of it.


So, right about the time I lent my nickel out to a friend who needed it’s powerful mojo [to go to court for something very important, that we're not going to mention on here] After she gave me back the nickel, her cable went out. Her cable operator: COMCAST. Coincidence? Or Powerful Indian Nickel Mojo, you be the judge.

Now, in case you’re wondering, my friend didn’t win. She was there by herself, without a lawyer, so, naturally, the DC legal system railroaded her. Now you might be wondering if the Nickel’s mojo is so powerful, why didn’t it work in court. I don’t know. The nickel has an Indian on the front and we all know that our red skinned friends didn’t have much luck before the courts either. Jus’ sayin’. It may be useful in gambling though, gotta try it out at an Indian casino. Me and chief Illiniweck versus the laws of mathematical probability. It’s on, math fools!

In other news, the return of the nickel did not fix my computer, but I was able to send pics from my phone directly to my secret computer lab, so I’ll have an actual home improvement post in a couple of days. In this one, I’m working with cinderblocks and rebar and doing all kinds of manly stuff that only someone with mad skillz can do.

Also, we’ll make fun of my brother some more because he made fun of me for not being able to toss bags of cement around like they are pillows. Since I’m a few thousand miles away now, it’s safe to mock him mercilessly without getting the crap beat out of me.
Posted by HomeImprovementNinja at 1:57 PM

Be careful loaning things to people. I once had a lucky silver ring that had been made by my uncle. I gave it to my ex-boyfriend (who was psychotic) and he LOST IT. He was like "oh well, whatever." I'm still mad about it to this day, especially since my uncle has now passed away.

Good stuff on FDDC today. I was secretly hoping for a subtle ninja reference, but the lawyerly stuff was good, too.

Hmmm... are you sure there's mojo in them nickels?

The guy in the front seems to be looking at me saying, "you there - GIVE ME BACK MY LAND!!!"

Not so lucky, was he?

Mock away. I like to mock my brothers when they can't beat the crap out of me, too.;)

I have lucky pennies.

E, yeah I have that problem. I lose tons of books that way, but I'd have no place to keep them if I got them back.

thanks andy. sometimes the ninja stuff just can't be worked in.

raincouver: the mojo is undeniable, although my friend claims that maybe it wards off evil spirits rather than fixing problems.

shelli: yes, how can money not be lucky. Think trump and gates have problems?

You and the author of "Indian in the Cupboard" to hang out more.